Honolulu, Hawaii (USA) -- The story of Buddha's birth is rich in symbolism and suggestions of meaning, appealing to the imagination and feelings. It is a question for us whether we can draw any meaning for ourselves out of such ancient stories. 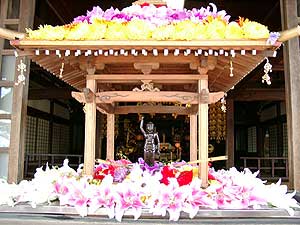 <<  Hanamatsuri, literally flower festival, is celebrated to commemorate the birth of Siddhartha Gautama.

The fanciful nature of the stories of the white elephant, the baby's birth fully grown, supernatural rain and flowers tends to limit their meaning to children. Nevertheless, they tell us about the role of Buddhism in the world.

Hanamatsuri, as a festival of Buddha's birth, developed in China and Japan as an occasion of beauty and joy. Spring was an auspicious time in nature. An ancient account tells us that when Buddhas are born, "all evil is ended, everything has fully matured."

Flowers play a conspicuous role in many Buddhist myths and in Buddha's birth, signaling times of celebration, hope, joy and beauty. Pouring sweet tea over images of the child Buddha and adorning flower pavilions became popular in Japan during the Tokugawa age after the 17th century. The liberating message of Buddhism brought welcome relief for ancient people with their many cares, anxieties and sufferings.

In Mahayana Buddhism every Buddha comes into the world with the purpose to emancipate those in bondage. However, as Buddhist thought deepened, it understood that salvation, like liberty, is indivisible; it must include everyone else.

The understanding of the mission of Buddhism expanded over the centuries, focusing on lay people as the center of the religion and the bearer of the mission of Buddhism. The transition in the role of the layperson received vivid expression in Shinran's vision. The Bodhisattva Kannon appeared as a monk and announced that he (Kannon) would become a woman as his wife. Together they would adorn and enhance the world. Shinran was commissioned to take this message to the masses in the eastern area of Japan.

Shinran's strong sense of mission also appears in the story of his vow to recite a sacred text for the benefit of suffering beings. He soon stopped, realizing it was not the right way to achieve his purpose. He remembered Shan-tao (Zendo), a Chinese Pure Land teacher, who stated that sharing one's faith with others is the true way to express one's gratitude for the Buddha's compassion. Thereafter, Shinran devoted his life to teaching the farmers and workers of eastern Japan.

We can draw some insight for the contemporary meaning of Buddhism from these stories:

» First, despite many historical changes and cultural contexts, the goal of Buddhism remains the same. It is to liberate people from their sufferings and to bring joy to their lives.

» Secondly, the context of Buddhist mission is in ordinary family life. Shinran and his wife had a mutual partnership to share the teaching.

» Thirdly, there must be outreach to people. Buddhism can no longer be isolated within the four walls of a temple, but it must turn outward to participation in the community and world.

As we take up our responsibility, we must constantly ask ourselves: How are we, as Buddhists, enhancing the world in which we live? Does our Buddhism bring joy to life in the world, peace and justice? In this way Hanamatsuri, the festival of flowers, will not merely be an annual event, but an expression of the meaning of our lives.