Buddhism and humanism: A reflection

Dhakka, Bangladesh -- Today is the Sacred Buddha Purnima, the full-moon day of Vesakha blessed by the birth, Enlightenment and Passing way of the Buddha. The day in very significant and important to the Buddhist world. It brings peace, integrity brotherhood, non-hatred, universal love, compassion and full humanism of the mankind of the world. 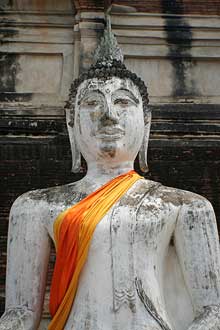 We know, humanism is a system of thought or action originating in Western Europe in the 15th century which gives more importance to the affairs of man or human life as against medieval traditions of scholastic theology or philosophy. It was a kind of movement against intellectual or scholastic authority of the middle ages and gave rise to modern intellectual, scientific, and social developments. It insists on the dignity of man and it refuses to find in the divine, anything external and superior to mankind. It concerns itself with mankind and the dignity of mankind.

The name of the French positivist philosopher Comte (1798-1837) is associated with this idea of humanism. Comte was known for his interest in the welfare and betterment of humanity. He believed in a religious order of a secular nature and a providential order of human development. He believed that the organization to the Catholic Church divorced from its supernaturalism, might provide an ideal structural and symbolic model for the new positivist society.

For the Catholic God Comte substituted the worship of Great Being, namely humanity past, present and future. He called his new faith "the religion of humanity." It was a kind of a system of social ethics. His religion of humanity stimulated the rise of secular religious movements like humanism. When the evils of Industrial Revolution become too pronounced, humanistic ideas and the philosophy of Comte got a fillip.

Against this background of "humanism" we have to consider what Buddhism is. Buddhism, being a religion of the sixth century B.C. had its origin much earlier to ideas of "humanism" of the Middle Ages of Comte's philosophy. Nevertheless, humanistic ideas were part and parcel of Buddhism and in a milieu which was far ahead of industrialization of society. Nevertheless it represented a bread-away from scriptural authoritarianism. Buddhism is a religion of man and it is concerned with the true nature of man and things around him. It emphasizes on a spirit of enquiry for each human being irrespective of caste creed or station in life. It is a kind of universal religion which is the property of mankind as a whole.

Buddha's salvation or 'Nirvana' is not the prerogative of a privileged few but of all human beings. Human beings can reach the height of perfection unbound and unhampered by any rigid convention of tradition. It only suggests the goal of spiritual advancement of man. There is on dependence on the supernatural or on any miracle. Development can come only by the progress of man in respect of things within him. It gives importance to individual human beings and on their thinking. Buddha did not proclaim himself to be a messenger or prophet of God or supernatural being. The progress or development of man, according to the principles enunciated by him, does not require the grace or assistance of God.

The middle path is eightfold: first, there should be right understanding. Human beings should have the knowledge and power to understand things as they really are. After right understanding comes right thought. Right thought includes thoughts which are free from malice, ill-will, cruelty and that which fosters noble aspiration. Next comes right speech i.e. avoidance of falsehood, slander, harsh and foolish talk, etc.

Then comes right action. Human beings should abstain from killing, stealing and falsehood. This contemplates that every fellow human being is properly dealt with according to his dignity and there should be peaceful and honorable existence for all human being. After this comes right livelihood, the kind of livelihood that causes no harm to other living beings. Nothing should be done to injure or affect the dignity of man. The sixth is right effort. Evil should be suppressed in human beings and wholesome habits should be cultivated. The seventh is right mindfulness or awareness.

Human beings should have self-mastery over their action through constant awareness. This includes control over mind and feelings. Finally comes right concentration where each human being's body and mind are associated and permeated with a feeling of purity and peace.

From the above it is seen that Buddhism emphasizes on the ethical conduct of right speech, right action and right livelihood and on concentration of mind through right effort, right attentiveness, right concentration and also on wisdom through right understanding and right thought (Sila, Samadhi and Panna). But all these Buddha preached on the basis of personal realisation and experience. Avoid all evil, do good and keep your mind pure. This is Buddha's message of deliverance. This "ethical idealism" finds expression in loving kindness to all beings. The four-fold sublime existence "cattaro brahmavihara" refers to the virtues of friendliness, compassion, sympathy and equanimity.

The four sublime qualities are "Metta" (loving kindness), "Karuna" (compassion or sympathy, response to another's miseries and misfortunes). "Mudita" (sympathetic joy i.e. state of joy in others' happiness) and "Upekkha" i.e. equanimity. "Metta" is not simple friendliness; it means fraternal affection, love and friendly feelings and goodwill for everybody. Functioning for the good of others is its essence. It emphasizes the need for filling our heart with love and for removal of hatred. It is different from selfish love or lust. One who cultivates loving kindness of "Metta" cannot ignore sufferings and evils that are around him. There are people who are hungry, diseased, ignorant, disunited and exploited. For the welfare of all such people, one has to strive and remove the causes of suffering. For this purpose, one has to have "Karuna" or compassion. Through such dispassionate goodwill to everyone, one can get detached or dispassionate joy or "Mudita". This is not like getting monetaty remuneration or promotion for one's selfish purposes. This gives equanimity or indifference to gain or loss, success of failure.

Buddhism recognises man as a source of all action. There is need for training and developing the mind through "Bhavana" has to be according to temperament and outlook of each individual.

Constructive activity helps in material prosperity and social well being of people. "Samanatmata" or equality is non-distinction of the basis of caste, creed or parentage.

Buddhism is a "human" and "humane" religion. It teaches us to love fellow human beings only and not divine beings. It also does not refer to attainment of divinity as the final goal but its aim is how to become perfect human beings. sabbe satta sukhita hontu-May all beings be happy.