Cortes Island, BC (Canada) -- I learned this simple lesson in self-care from my friend Tina Lear, a talented musician who arrived a day late for an annual summer gathering of friends on beautiful Cortes Island in British Columbia. 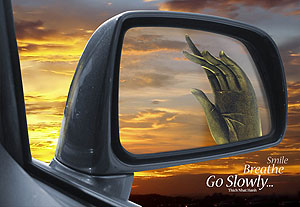 Old-growth forest, ocean waters, distant snow-capped peaks, and killer whales spouting as they swim the passageway to Alaska make Cortes a magical place. But getting to this idyllic paradise can be a major hassle.

The island is remote, accessible only by seaplane, boat, or a chain of ferries. Tina was so busy launching a new CD that she almost didn't make the trip.

The night she arrived, about 30 of us were gathered up on a hill in a large white tent that serves as a meeting room. The evening activity was a storytelling circle. When it was your turn, you had three minutes to tell a story from your life.

Tina, petite and pretty, strode quickly and purposefully to the center, with her hands on her hips, already getting into character as her hassled self, the day before. She had been so busy that she was thinking of staying home to work rather than joining us.

Then she had a breakthrough. Tina saw herself "from the outside," and became a kind of witness to her dilemma. She did a fabulous rendition of scurrying around, trying to get everything done. Then she acted out the moment of awakening, the "Aha" when she understood how busyness can be a not-so-subtle form of violence.

"Would I be acting this way if Thich Nhat Hanh [a well-known Vietnamese Buddhist meditation teacher and peace worker] moved into me? If I were hosting him, like my body was a house?" she pondered aloud. Tina went through her whole inner dialogue. Would she really make that saintly old man give up lunch, even though he was hungry, just because she was too busy to stop? Would she forbid him to pee because it took up too much time? Would she call him names if he were slow, and demand that he move faster? When he needed a nice mindful walk, a time just to breathe and take in the fullness of summer's abundant beauty, would she keep him prisoner in her office until the last envelope was licked?

We all got the point, roaring with laughter. Why is any one of us less valuable than Thich Nhat Hanh, Albert Einstein, Mother Teresa, Jesus, the Buddha, the Beatles, the Dalai Lama, the Pope, our own beloved children, our aging parents, or our very best friend? We wouldn't even think of treating the people we love and respect the way we treat ourselves when we're possessed by busyness. In truth, most people wouldn't treat strangers--or perhaps even their worst enemies--with the kind of thoughtless cruelty they inflict so willingly upon themselves.

Think of a person whom you love and respect. For the next week, each time you forget to care for yourself, pretend that someone dear and precious lives inside you. Honor that person, and treat them with all the respect they deserve. If you adopt this as a daily practice, little by little a strange and wonderful transformation will occur. You will remember how to be good to yourself. And you will experience how much more creative and productive you are when you know that you are worthy of your own care and love.