The magic of ordinary experience

London, UK -- When I first started reading about the Buddha's life, I was disappointed to learn that the existence of God was one of the subjects on which he declined to make a definitive comment. 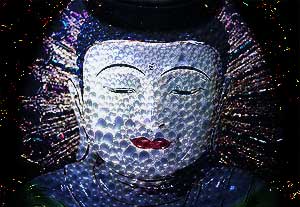 At the time, this seemed to me either rather unfair or something of a cop-out – surely this was exactly the kind of topic that an awakened being should pronounce upon, for the benefit of all. However, after the last couple of years of amusing but unproductive pantomime debate ("oh yes he does, oh no he doesn't"), I am beginning to get a sense of how not answering may well have been an enlightened response.

Pressed further, the Buddha is said to have explained that dwelling on such a question is not conducive to the elimination of suffering, which was the sole purpose of his teaching. He asked whether, if we had been shot with a poisoned arrow, we would want to know who had fired it, why, and what type of bow was used, before deciding to have it removed? "If the person who was shot were to seek the answers to all these questions," he told the monk Malunkyaputta, "he would be dead before he found them." Touché.

The tussle over God is marginally more entertaining than getting shot, but the protracted diversion created by its war of words could nevertheless be more of a hindrance than a help. Not only has the stream of agitated comment brought us no closer to finding an answer, it hasn't even enabled us to formulate agreed terms for the question. Part of what makes the argument so comical is how the concept of "God" onto which atheists project is rarely the same as the one defended by believers. Part of what makes it tragic is how, at the extremes, each party insists that their denial of what they think the opposition believes is enough to make them correct, to the point of misrepresenting the traditions they seek to uphold.

As we appear to be getting nowhere on this, I'd like to offer a fresh perspective for the new year – that of a non-theistic approach. Following the Buddha's example, the non-theistic position refutes the extremes of both a nihilistic view (atheism) and an eternalist one (theism). In doing so, it cuts through intellectual speculation concerning the origin of the universe, in order to free up the space in which we can systematically investigate, engage with and appreciate the world as it is in this moment, right now.

Non-theism may sound somewhat like agnosticism, and indeed contemporary Buddhist teachers such as Stephen Batchelor have adopted the agnostic label as a way of distancing themselves from those metaphysical elements of Buddhist tradition, such as rebirth and karma, that are not empirically demonstrable. However, whereas agnosticism tends to emphasise not-knowing, which results from and remains confined by the limitations of intellectual and philosophical inquiry, a non-theistic approach implies letting go of all concepts in order to go deeper into experience, creating the possibility that this might produce a more profound kind of understanding.

By consciously dropping the intellect for a period of time, such as in meditation, there arises the opportunity for a gap in the mind, opening it to the unspeakable magic of ordinary experience. Through repeated practice, we might come closer to developing a non-conceptual awareness of the way things are, or in Buddhist language, the "suchness" or "isness" of things.

As the word "suchness" implies, this is an experience that goes beyond words, and while language and the intellect can be helpful in pointing towards it, it cannot fully do it justice. At the same time, it isn't especially mystical or esoteric - it was this awareness that Abraham Maslow was talking about when he described the "peak experience" – a spontaneous sense of marvelling at and feeling interconnected with the natural world that is often described and praised by atheists and believers alike.

A few years ago, I attended a talk by the teacher and scientist Jeremy Hayward, at which an over-zealous organiser claimed that Hayward had abandoned his academic career to search for the meaning of life, which he had found in Buddhism. Hayward quickly and gently corrected her, saying: "Buddhism hasn't taught me the meaning of life. But it has taught me how to look."

In the heat of the atheist/theist debate, we seem to have forgotten how to look – to be amazed that things are, rather than arguing about what caused them to be. Adopting a non-theistic stance could therefore be a starting point for investigating and appreciating the world, which might be a much more rewarding activity than attempting to explain it.

So for 2009, perhaps we could resolve to conserve the energy previously spent on chasing round in conceptual circles trying to prove or disprove the existence of a divinity, and use it instead to go for slow walks in the park, in which we really take the time to look at and breathe in the majesty of the trees, the birds, the sky and the grass. Isn't that God enough for now?