San Francisco, USA -- I spent last Groundhog Day with Harold Ramis, the director and co-writer of "Groundhog Day." He was on set in Shreveport, Louisiana, directing his next film, "The Year One," produced by Judd Apatow, starring Jack Black, Michael Cera and others, and due out in June. 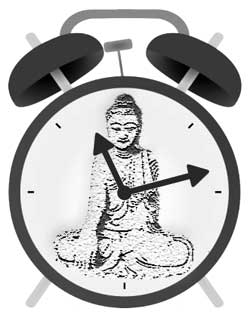 A large sandy tract outside Shreveport had been turned into Sodom for the film. Much else about the plot I am not at liberty to disclose, except to say it's a Biblical epic comedy that will rock your ark.

I was interviewing Ramis for a Buddhist magazine called the Shambhala Sun because, it turns out, many Buddhists read the Buddha's truths (or dharma) between the lines of the script. Ramis gets a kick out of the fact that many religious groups claim the film is for and about their particular sect. I suspect Ramis and the Buddha would agree: 'The more, the merrier."

Ramis himself is not a Buddhist, does not meditate but is well read on the principles and consciously practices the simple tenets that weatherman Phil Connors comes to embody (picture a bald Bill Murray in saffron robes). Ramis, I learned from hanging out with him and interviewing many around him, is somewhere between a mensch (a really good guy) and a boddhisatva (a really good guy whose mission is to help other people become really good guys).

Connors would understand why for six months I wrote and rewrote the story for the Shambhala Sun (look for it in June; check it out here). But the good news is all that time meditating on Ramis has inspired me to invent a new sect I call Groundhog Day Buddhism, and I can think of no more auspicious day to introduce it than today, Feb. 2.

Especially at this time of year, when winter seems to drag on and on, when today feels just like yesterday, when tomorrow holds no hope for ending the agony of repeating today, with no end in sight, life gets depressingly repetitious and meaningless. How do you overcome those same-old-same old winter blues? Perhaps this interpretation of the Buddha's Four Noble Truths will help.

It's 6 a.m. Again. You wake up to Sonny and Cher's "I Got You, Babe." Again. Not happy about facing your mate, your dog, your coffee maker, your boss, your colleagues, your Self. Again. Or, as Phil says, "What would you do if you were stuck in one place and every day was exactly the same and nothing really mattered?" To which his drinking buddy responds: "That about sums it up for me."

Well, consider the alternative: not waking up at all. Or waking up paralyzed from the waist down. This can make you think that life - being alive - is good.

Better yet, Thich Nhat Hanh recommends approaching every situation, in fact every step, certainly every day, as a "new beginning." To have what the late Zen master Shunryu Suzuki called "the beginner's mind" helps you see and experience each moment as though you were a wide-eyed and fascinated child. Even Sonny and Cher will sound inspiring, as they croon: "And we don't have a pot but at least I'm sure of all the things we got..."

Suffering arises from attachment to desire.

I love the part where Phil Connors truly gets that he can control and manipulate time, human response and his own behavior. "I'm not going to live by their rules anymore!" he intones and shortly thereafter punches cloying Ned Ryerson in the jaw.

But therein, of course, begins the exacerbation of his suffering. Because as soon as we think we control things, we do not. Though Connors can change, he himself does not. The multiple slaps in the face from Andie McDowell's Rita are simply metaphorical slaps in the face from Reality. Upon realizing controlling outcomes will not win her love, Phil sinks into deep morose. "I've killed myself so many times I don't even exist anymore," he whines. And still he suffers.

This is perhaps the least understood of the Buddha's wisdom. It's not that we shouldn't aspire to improving ourselves and conditions in the world. It's being so attached to their favorable outcome that when our attempts don't come to pass we are bummed. We can still strive, but without letting our happiness depend on the promotion, on winning the dream significant other, on beating the red light, on winning or losing the election. Or on rushing spring by not seeing our shadow (figure).

Your mission is to identify your indulgence, the thing you think makes you feel so good - that huge breakfast Phil devours - and realize it may make you feel bad. Like when you get on a scale and realize you are not Phil, but have joined 30 percent of Americans who are overweight. Fill in your personal gluttony here.

There is a way out.

The Zen aha that there is no gain in more pain usually triggers one's pursuit of this noble truth. The way out of the loop, the way off the wheel of pain - called samsara in Hinduism, Buddhism, Jainism, Sikhism and other religions - is to become a mensch. To do the right thing and not for self-aggrandizement. Simply for the good of it. Phil whispers to Rita, notably while she is sleeping, "I've never seen anyone who's nicer to people than you are." Which leads Phil, and hopefully you, to....

8 Ways to Do the Right Thing

Phil now embodies the boddhisatva mensch. He feeds the homeless guy, brings coffee and donuts for the crew, does the Heimlich maneuver on a choking guy, catches a kid falling from a tree, and slowly but surely actually becomes a selfless server of mankind. This, naturally, wins the love of not only Rita but also the whole town and viewers of the film. Ramis told me he actually cried at this point in his first reading of the original script by Danny Rubin.

So when you wake up tomorrow and it feels just like today, as the sole avatar of Groundhog Day Buddhism I recommend you do one thing - one good thing - to or for your husband, wife, son, daughter, mother, dog... or yourself. And I guarantee you the day will feel better, surely different, and you will want to do something good again the next day. Just make sure it's a different thing.

Cue my sect's chosen chant: Nat King Cole's "Almost Like Being in Love." Which coincidentally is the ending song of "Groundhog Day."