Riches of a Different Market

Fresh produce offers food for thought in a time of crisis.

Being rich, being poor, means nothing without being. - Sharon Riddell, The Zen of Money

San Francisco, USA -- The week of the Stock Market Crash of 2008, I happened to be walking to the farmers’ market. It afforded me (puns intended) a wealth of insights, a few worthy of accounting here. Such hard times as these have plenty of dharma doors we all can enter. 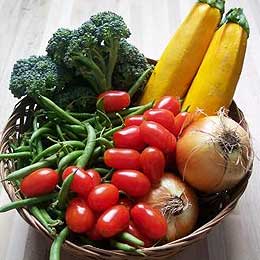 So there I was, with a chunk of hard-earned life savings evaporating in the stock market and sensing the economy itself clearly poised for bitter struggle ahead. But I’ve never really fully abandoned the hippie credo with which I came of age: voluntary simplicity that harmonizes with Buddhist ethics. So now I’ve got some good news and some bad news. The good news: I’ve already tightened my belt buckle. The bad news: I’ve already tightened my belt buckle.

But that morning, last August, I was wondering how others were making out, yet found myself instead trying to measure my losses in terms of people before me in the buzzing foot-traffic swarming around the open-air stalls. Everybody, I could see, has a story. The diversity of faces at a farmers’ market rivals that of the produce, from all walks of life, gender, and paint jobs. I wanted to reach out, but I couldn’t make sense of my situation by comparing it to anyone else’s. I felt frozen, constricted, alone in the crowd.

Then I bumped into my friend Marc, who was happily accompanying a bunch of fresh flowers en route to his lover. To strike up a conversation, I asked if he’d heard that one trillion dollars had left the economy today. No sooner were the words out of my mouth than I realized I had no real idea of the meaning of what I’d just said. Fortunately, his reply was a hearty belly laugh, and I had to laugh too. Glancing at all the lively transactions going on around us, he exclaimed, “So then money’s really a hallucination, is it?” He widened his eyes for rhetorical emphasis, and we both shared a bigger laugh.

“Ah, I see,” he continued, on a roll now. “All I have to do is walk up to that farmer over there, show him a piece of green paper, and he’ll look at it and know how much stuff I can walk away with!” Marc’s a screenwriter, and his wit is easily contagious. He makes six-figure deals for movies that may never be seen, much less made, and he hasn’t a penny of his own in the bank: whatever he is paid goes mostly to his son and ex-wife. Were I to enumerate for him how much of my savings went zip! in the stock market that day, he’d probably say politely that it was good I had something to lose.

There I go again. You’ve probably done it too. Measuring self against others. It’s a bit like gossip, isn’t it? Who’s up, who’s down. Who can really know anything about anyone else if not about ourselves first? How much energy do we all waste in such bad investment of our attention? It’s a toxic mimic of compassion, this blind speculation about others. Having indulged in it, I found it fueling fear (of scarcity and failure), only furthering selfhood’s prison of isolation.

Call it yet another lesson in life’s Dharma Delicatessen. I sat down on a bench, just to stop and watch as my body and mind grew calm in being aware of breathing … and the blank between in- and out-breaths. Beside me was the stall of Green Gulch Zen Farm. The crew was still unloading and setting up. Nothing for sale yet; shoppers passed on by. Void of reference to scales or cash boxes, each head of kale and bunch of beets shone, quietly luminous, mysterious, luxurious: as is. Just perfectly manifesting the entire cosmos, the adequacy of earth, air, water, and heat—all deliciously manifesting a sangha of Buddha-nature together. Beyond price.

Just then the stand opened for business and I went about stocking up on my week’s grub. It’s a true joy to share in the wealth of Endless Life with the zen farmers.  Like the Buddha’s original sangha, they’re a kind of buffer against the seismic rumbling of social upheaval: in his day, it was the Axial Age, moving from agriculture to a market economy; in ours, who knows where we’re going?

Isn’t this part of the challenge of Western Buddhism, to continue and share the practice through worldly realms? This monastery doesn’t go through town with alms bowls but instead pitches a tent in the marketplace, and the town comes to it.

And me, I saw that mindful marketing means more than buying organic because it tastes better and is healthier for my body and the earth’s body, and that being a localvore means more than saving gallons of fossil fuel for transport from farm to fork. These are all good, but there’s a greater opportunity for precious practice: to see and understand and be the kindness, compassion, equanimity, and limitless rejoicing of Ah, how good it is to be alive.

Enriched, nourished, I’m walking my veggies home. And if, when I turn a corner, I come upon a houseless person, there’s yet another opportunity to stop, unloosen the constricted heartstrings of this small package of ego, and practice selfless giving. Giving a nonjudging ear, the healing of deep listening, along with a round coin as token of love’s dignity. No “thank you” necessary: no grasping onto labels of giver, givee, or gift, in the utter generosity of this wonderful moment. Openhanded and openhearted. Then on home, to put grub away and resume my new vow: rounding up accumulated unused stuff to recycle to charity.

Facing the challenges of the seasons ahead, I find myself reorganizing my life. Clearing space helps set my inner house in order as well, with space for interaction with others along the Way. Gripped by a collective challenge, how can we not come together as one?

-----------------
Author of The Complete Idiot's Guide to Understanding Buddhism (3rd ed.), Gary Gach has contributed to Harvard Divinity Bulletin, Inquiring Mind, The Nation, The New Yorker, Turning Wheel, and Yoga Journal. He teaches Buddhism and haiku, and blogs at psychologytoday.com.