New Delhi, India -- Unlike the Harvard guru who turned on, tuned in and dropped out of sight till the law caught up with him, weatherman Phil Connors was not dropping acid. But he was having bizarre visions. 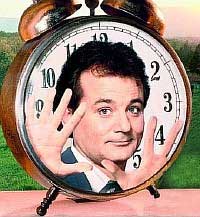 << Monks and neuroscientists are trying to find common ground in the discovery of self.

Or just one vision; the same every day. He would wake to the Sonny and Cher ‘I got you, babe’ number, stare at the ceiling, drink coffee, drive to work with the usual set of lousy people and hit the same old sack on his return home.

Life, for Bill Murray in ‘Groundhog Day’, was a drag. Tomorrow never arrived and yesterday kept replaying itself in slow motion. Connors found a way out: trying to exit by tossing a live electric toaster into his bath tub. But Sonny and Cher were back again next morning, telling him there was no escape from suffering. There was a serious problem: his mind didn’t understand him. Or perhaps he didn’t understand his mind.

The movie, now a cult flick, ends with Nat King Cole’s ‘Almost like being in love’ as Murray falls for his dream woman and walks with a spring in his step. The change comes about slowly as Murray realizes that the world was not repeating itself before him; it was he who was at fault. He realized he had been self-centred, looked down his nose at those around him and failed to help others.

He kept repeating himself till he realized his true self. Finally, Murray figured out the mantra of life: Renew yourself each day; do it again, and again, and forever again. The Hollywood film ends with this Buddhist sutra. It also raised a profound question: can the self guide itself out of its self-created misery?

This is what was discussed all this week in a cosy conference room in the middle of a pine forest right under the snow-capped mountains. The Dalai Lama and a select group of neuroscientists, philosophers from some of America’s leading universities and a bunch of dharma followers, including Hollywood star Richard Gere, were locked in intense discussion on the issue of self. For five days, they discussed the concepts of attention, memory and the phenomenological study of the mind as part of the Mind and Life Dialogue – an interface between Buddhist monks and neuroscientists to find cross-cultural ground between the two traditions. They did not reach firm conclusions but the dialogue – the 18th in the 22-year-old series – explored the concept of “mind and self” from two different perspectives – spiritualism and science.

Logically, the two perspectives should’ve been at odds with each other. Instead, the monks and scientists complemented each other. The dialogue caught the attention of the world’s scientific community in 1994, when the faculty of Stanford University engaged the Dalai Lama in a long dialogue. They called it a “once-in-a lifetime-experience”. The Stanford faculty’s discussion ranged across multiple issues from the “selfish gene” to the Big Bang theory; from mind-brain dichotomy to the use of self-hypnosis to ease pain. Even the “ethics of a cyber hacker” was discussed with the Tibetan spiritual leader. The Dalai Lama, in turn, posed questions on the role of creation stories in creating individual and community identities.

The high point — and most contentious one — of that debate came when Russell Fernald, professor of psychology, talked about the nature of the brain. He argued that “the function and structure of the brain are not set early in life, but undergo fundamental changes depending on experience”. Quoting studies that have shown that the brains of professional musicians are different from those of non-musicians, the Standford don asked the Dalai Lama to elaborate “how human behavior affects the brain”. This was to be Bill Murray’s problem in the film Groundhog Day.

The Dalai Lama’s answer was simple: “If the discussion is limited to the brain, Buddhist tradition has very little to say. But if you expand the discussion to the concepts of mind and brain, there are parallels to Buddhist concepts of mind and vital energies. In Buddhism, there are different degrees of consciousness. So it is not surprising that mental states might affect the structure or function of the brain.”

The monk concluded by saying that he is open to the possibility that “non-material ideas can affect consciousness and influence brain state”.

Both monks and scientists are divided on issues of “self ” and “consciousness”. Many a monk has argued that the ‘self ’ is “an illusion caused by ignorance”. Many a scientist has agreed, at least in part because the brain’s neural structure is known to change its form every second and the challenge is to know how to maintain the idea of ‘self’ in a brain that is in a state of flux. But Tibetan Buddhist spiritualism and science do not agree on the concept of consciousness. The monks argue that there are many kinds of consciousness – eye, ear and so on. But the scientists say there is only one – the mind. They clinch the argument by citing the effects of morphine. “You put that into the brain and the whole body goes to sleep.”

So, can spiritualism and science ever agree? What is the point of the Mind and Life dialogue? Interestingly, the two sides often differ on the facts and agree on approach. For instance, during a recent debate, professor of physics Steven Chu summarized the Big Bang theory and asked the religious leader whether it bothered him that “science was impinging on subjects like the origin of the universe that once were the sole province of religion”. The Dalai Lama replied that he saw no incompatibility between the scientific method and Buddhist tradition. “If a theory says something should appear, but it doesn’t, then the theory is probably wrong.”

He was, of course, drawing from the “scientific philosophy” propounded by the Buddha, who described the universe as an infinite number of systems forming, disintegrating and re-forming, without beginning or end. Within these worlds, the Buddha said, living beings undergo repeated birth, death and rebirth based on their innate misconception of reality. All creatures conceive of things existing independently; in truth nothing is self-originated. He called this interdependence emptiness – the lack of an ultimate self. When the mind realizes that its identity is merely illusion, it achieves freedom.

Bill Murray’s wisecracking and cynical character in ‘Groundhog Day’ finally sees the light when he detaches himself from his self-centred existence. How did he do it? Did his brain guide him? Or did he guide the brain? The questions remain.