Visakha Bucha Day falls on Friday, but how many of us are awake to the message it brings?Bangkok, Thailand -- Celebrating the Buddha's birth, enlightenment and his final entry into nirvana, Visakha Bucha Day is the most important in the Buddhist calendar. But not all Buddhists realise the relevance it has for their everyday lives. 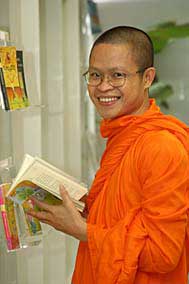 "It can be your day too," Phra Maha Wudhijaya Vajiramedhi says. "Look at what Lord Buddha has achieved and follow in his footsteps."

The famous monk, author of many books on dharma, is also the founder of the Vimuttayalaya Institute.

Established in 2007, the institute seeks to promote Buddhism and show how its teachings fit in with the modern world.

It was a prophecy of enlightenment that he fulfilled.

"So, you should set a goal in your life and pursue it," says Wudhijaya. "Without a goal, your life will be like a rudderless boat."

"Lord Buddha is a human who attained enlightenment. So, every human has the potential to become enlightened," Wudhijaya says. "We may not be able to remain in a state of constant awareness, but we should at least be awake, enlightened and content from time to time."

He adds that Lord Buddha's last words were, "Accomplish your aim with diligence."

The monk says they should serve to remind everyone that mindfulness is a vital part of everyday life.

Visakha Bucha Day falls on the full moon of the sixth lunar month  May 8 (Friday) this year.

Accorded international recognition by the United Nations as the Day of Vesak, the anniversary will be marked around the world with celebrations and events.
TOP