Dr. Chan Kah Yein (PhD) graduated from the Dhamma Speakers Class in 2006. Here is a personal account of her journey into the realm of a Dhammaduta (Dhamma propagator). 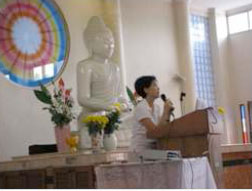 17th May 2006 was the first lesson of Module 2.  Module 2 had six parts in all and each part would be mentored by distinguished and experienced speakers.  Uncle Vijaya was the mentor for Part 1.  I was early for the lesson (it was held in SJBA) and I chose a seat in the middle.  Everyone was busy talking…again, quoting the Dhamma.  And again, I felt like fleeing for my life.  Of course I had read the two books that we were required to read.  Umpteen times, too.  But I truly felt I was so green, so new, and I did not know enough.  The fact that almost everyone was talking so authoritatively really frightened me.

Again, it was too late to back out.  Uncle Vijaya had come.  As always, Uncle Vijaya was in his element.  Although he made us laugh, he was also very serious at the same time, telling us our responsibilities as Dhamma speakers.  As I listened to him, I felt extremely fortunate to be able to learn from the best in the field, and I marvelled at this jewel of the Dhammaduta world.  He must be heaven-sent, I was very sure of that.  Our coordinator, Dr Phang, greeted everyone and talked with us.

Somewhere in the middle of the lesson, in walked the other coordinator, and this was Bro Lim Chin Kah.  I had read quite a lot of his group mails through the internet e-groups and heard about his dhammaduta work – he has a book project which disseminates Dhamma books all over the world, and he also runs an e-group called Dhammafriends.  I had never met Bro Chin Kah “officially” before but had spotted him during the launching when I was a wrapped-up Eskimo girl sitting in the corner that night, on the verge of falling into feverish delirium.

I did not make any new friends that night.  The closest I got to a friendly chat was with Bro Dayananda who had sat in front of me.  He was very nice.  Bro Wee Fah offered to be monitor of the class (thank goodness for someone so selfless) and I remembered he asked me later if I would like to be secretary of the class.  Of course I chickened out totally.  And Bro Jaik volunteered to take on the toughest job – Class Treasurer.

Uncle Vijaya told us that from the following lesson onwards, he would want three participants to do a ten-minute presentation of a Dhamma talk each week.  He asked for volunteers.  Under normal circumstances, I would have volunteered (I normally do so so that I can get the chore out of the way and enjoy the rest of the course).  But this time, I made an exception.  I felt I did not know enough, and I was just too green.

On the second lesson, the three brave volunteers spoke their hearts out, each for ten minutes, as agreed.  Uncle Vijaya then asked for the next three volunteers.  This time, the chicken left me, so I put up my hand, albeit sheepishly.

All throughout the week, I searched for a topic.  I finally decided on “Anger” as it is a common affliction amongst us modern-day folks.  I searched the internet for a suitable sutta and found the Aghatavinaya Sutta from the Anguttara Nikaya.  It was a sutta about subduing hatred.  Aha…perfect.  Something new, something I had not heard of before.  I decided I should prepare powerpoint slides for it.  I figured just in case I wasn’t good enough, maybe my pictures would help save the day (and save me)!  I was new at preparing powerpoints as I did not use them in my teaching, but I thought “this shouldn’t be too hard…”  So I tinkered with the powerpoints and came up with something “presentable”, in my opinion.  I used cartoons in it.  Yes, I am still quite young at heart (!!).

Lesson Three.  D-Day for me.  As luck would have it, I was coughing so badly (again?) that week.  I thought this was too coincidental already – is this a sign?  Anyway, armed with a few lozenges, I drove to SJBA that evening.  Praying hard that I would not cough, I volunteered to go first since that was my usual habit.  Get it out of the way, then you can relax, and watch others….and learn from them.  So I made my way to the front, opened my powerpoints, took a deep breath, smiled to everyone, and started.

“Have you ever felt like this before?”, I asked my audience, showing them cartoon pictures of three angry people.  Ten minutes passed, and I must say, I enjoyed the process very much.  Uncle Vijaya had good things to say, of course, as did he for everyone.  Believe it or not, I actually did not cough at all throughout my ten-minute talk.  But I coughed after my presentation!!  And very badly too, until Bro Dayananda, bless his kind heart, had to offer me a coughdrop!

As I was listening to my fellow participants presenting their ten-minute talk, suddenly I felt someone tap me on the shoulder.  I turned around, and it was Dr Phang.  He asked me, “You free this Sunday?”  I asked, “Why?”, and Dr Phang said, “I have a talk at Nalanda, I will give you ten minutes of my time to present this same talk of yours.”  Of course I almost fell off my chair!  Me??  A rookie giving a Dhamma talk at Nalanda Dharma Centre?  Dr Phang, you must be joking!

But he wasn’t.  He was dead serious, and he said to me, “Think about it, and let me know.”  The chicken in me (yes, it was still there) started giving all sort of excuses, “But, I’m coughing, you see…and Nalanda is so far…I have no transport…”  “Think over it, and let me know.  I can take you there.  I know you’re coughing, but the Dhamma works in mysterious ways…”, Dr Phang said.  I had absolutely no idea what he was talking about.  Here I was, coughing myself silly.  Granted, by some miracle, I had not coughed during the ten-minute presentation that evening, but how was I to know it won’t happen again at Nalanda?  I can’t be that lucky, can I?

At the end of the lesson, I went up to Uncle Vijaya and whimpered, “Dr Phang asked me to give my talk at Nalanda this Sunday!!” (which was just two days away).  Uncle Vijaya looked me in the eye and said, “GO!”

I had no confidence at all and using my cough as a convenient excuse, I chickened out and told Dr Phang, “Thanks, but maybe next time.”  The next day, I thought it over and decided that if Dr Phang and Uncle Vijaya thought I was ready to give a ten-minute talk, why must I disappoint them?  So I called Dr Phang and told him I would go with him the next day.  Dr Phang said, “I knew you’d come.”  Was he psychic, I wondered…

--------
The article above is an abridged version of Dr Chan's eBook, "Little Steps, Joyful Steps". Download her eBook here.
TOP