by Dr Tilokasundari Kariyawasam, The Daily Mirror, May 9, 2009

Colombo, Sri Lanka -- Buddhism began as an intellectual and ethical movement in the sixth century B.C in India. It spread during the life time of the Buddha in India. At the time of the Buddha’s parinibhana almost all the important states of India seemed to have been deeply influenced by the new teaching. He had many disciples and accumulated a large public following by the time of his parinibhana in 483 B.C.

The spread of Buddhism 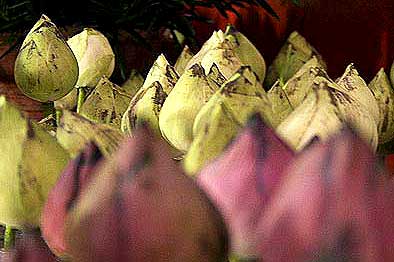 << The Lotus - an universal symbol of the Buddha's purity, is adopted across all civilizations touched by His Teachings

Buddhism has been significant not only in India, but also in Sri Lanka, Thailand, Cambodia, Myanmar and Laos, where Theravada has been dominant. Mahayana has had greatest impact in China, Afghanistan, Japan, Taiwan, Tibet, Nepal, Mongolia, Korea and Vietnam as well as in India. Tibetan Buddhism which developed in isolation of Theravada and Mahayana Buddhism is functioning as a separate sect since the 19th century. The number of Buddhists world wide has been estimated as between 150 and 300 million.

The marvel of Buddhism is that it has lasted for more than 2500 years. It has a philosophy as well as a religion. The philosophy of the Buddha fascinates the intellectual. As a religion it illuminates the lives of millions of men, women and children. All the more wonderful, it has never been imposed by force.

Today many universities in Asia, the Buddha’s doctrine has been made a subject of philosophical research. Vivid dialogues and sayings of the Buddha, recordings, edicts, scriptures originated in Asian civilization. Two and half centuries after the parinibhana of the Buddha, a council of monks collected his teachings and the oral traditions of the faith into written form, called the Tripitake (The Three Baskets). The Tripitake which is translated to English and other languages form one great prime source of Buddhism in Asian civilization.

The contribution which Buddhism has made to the spiritual, moral, social and intellectual advancement of man and woman in Sri Lanka and in Asian Civilization is needed notable. Buddhism is a moral code based on compassion, universal love, non-violence, equanimity and a practical philosophy for daily life. The essence of Buddhism is the Eightfold Path, which includes morality, mind, culture and wisdom.

Buddhism is also an institution of well-laid rules and regulations formulated for its functioning. Thus a community of men, women, male and female, disciples who are known to hold the same views dedicated to the same cause, opinion and principles and following the same religious teaching emerged. It was a highly organized community possessing stability and a high degree of efficiency without any loss of functions to the individual members whether man or woman. Woman had the right to freely participate in the social life of the religion. Given the diversity of target groups and educational tasks, the Buddha made effective use of informal education to teach and educate the fourfold Buddhist community.

Impact of Buddhism in Asian civilization can be attributed to the unswerving faithfulness of the bhikkhu and bhikkunie groups, the Tripitake and the scriptures. There were a sufficient number of faithful, erudite monks to preach the doctrine undefiled and to fill millions with its spirit. The transforming power of Buddhism made new personalities of all kinds of people -- from kings to peasants. It has changed individual men and women, it has changed entire nations. Emperor Asoka of India, King Tissa of Sri Lanka were history’s greatest examples of transformation. The Indian missionaries led by Rev. Mahinda brought not only Buddhism to the Island, but also the culture and civilization of Buddhist India. Almost all the Buddhist rites, ceremonies, festivals, architecture, arts and crafts were introduced into countries of Asia.

The Emperor Asoka is history’s greatest example in the impact of Buddhism in Asian Civilizations. Inspired by Buddhism in 200 B.C. he sent missionaries to many lands. As a result Buddhism played a vital role in Asian Civilization. Vincent  Smith in his book “Asoka, Buddhist Emperor of India” states “the transformation of the local sect into a world religion is the work of Asoka alone.” He passed on the Teaching in its original purity. The extent of the accomplishment of Emperor Asoka, would not have been known today were it not for some 5000 inscriptions that he had carved on pillars, rocks and caves throughout his empire. The inscriptions contain Buddhist rules for the laity. These inscriptions explain the meaning of this religion and reveal what Emperor Asoka accomplished in social welfare in his empire.

Missionaries were sent to Sri Lanka while others went to Burma to Syria, Egypt, Cyprus, Macedonia and Epirus. So from generation to generation tales of the glory of Emperor Asoka, man of peace, in Asian civilizations were handed down from parent to child. He put the teaching into practice. One inscription includes the references to; “an absence of self-indulgence, many good actions, kindness, generosity, truthfulness and parity.”

Emperor Aoska recorded: All men are children. And just as I wish my children every kind of prosperity and happiness, in this world and the next, so do I wish for all other men.” Hundreds of monasteries arose, and subjects were encouraged to make pilgrimages to them. He built hospitals for men and animals. He was the pioneer in introducing the profession of veterinary surgery. He established gardens for the cultivation of healing herbs and rest houses at intervals along travel routes.  He was a pioneer educationalist and urged Buddhist monks to raise the national level of instruction. He championed and financially supported the education for women.

The most glorious mission of Asoka was carried out by Rev. Mahinda in Sri Lanka. This was followed by the arrival of Rev. Sangamitta. These two visits brought about a renaissance in Sri Lanka. Buddhism, education, arts and craft, sculpture, agriculture and the economy developed. The social, cultural intellectual and moral development of the individuals would not have been a possibility if not for the introduction of Buddhism to Sri Lanka. Buddhism was equated to governance and every king who ruled in Sri Lanka was dedicated to Buddhism and contributed to the welfare of the country.

Buddhism in other Asian societies
A Buddhist environment prevails in countries like Burma, Thailand, Vietnam, and Laos. Buddhism played a predominant role in Asian civilization. Theory and practice of Buddhism have made happier and more confident people as confirmed by other great individuals. Thomas Huckey stated, “It spread over a considerable portion of the world with marvelous rapidity, and is still the dominant creed of a large fraction of mankind.”

As a result of the spread of Buddhism, Asian civilizations remained devoted and dedicated to transient spiritual standards and values of a more lasting character. It may be rightly said that Emperor Asoka’s outstanding service to Asian mankind is the missionary zeal that he displaced both within and outside his vast domain. Sri Lanka profiting by his missionary activities, dedicated itself whole-heartedly to the observance, preservation and the custodianship of the Buddha-Dhamma writing down of the doctrine during the 1st century A.D. is the greatest contribution that Sri Lanka had made to the intellectual heritage of mankind. Asian civilizations are not only proud of its past Buddhist cultural attainments but they are also conscious that the present day world society sadly needs the most comforting message of peace and loving kindness declared by the Buddha as a panacea for all ills of the world.

His philosophy was that everything in the world is transient --   it changes. It is so with the infant, the child, the youth, man and women. It is very philosophical and has a special appeal to mankind. His ideology is truthfulness, peace, compassion, justice and love. His attitudes are very positive such as respect, regard and recognition. These noble principles have been retained in Asian civilizations, where force and coercion dominate. The impact of Buddhism in Asian civilization cannot be underestimated. Its impact has been significant, where Therovada, as well as Mahayana traditions have had the greatest impact.
TOP