Buddhism discourages blind faith and urges everyone to think freely Dhaka, Bangladesh -- THE Holy Buddha Purnima is the most sacred occasion for the Buddhist community of Bangladesh as well as for the global Buddhist community. It signifies the three important events in the Buddha's life: his birth, enlightenment and great demise. All these three events took place on the full moon of the sixth lunar month of Vesakh. 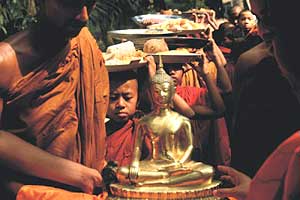 The Buddha was born in 623 BC. His father was King Suddhadana, and mother was Queen Mahamaya. Before enlightenment, the Buddha was known by his clan name of Siddhartha Gotama. He was extremely intelligent and compassionate, and it was predicted that he would become either a universal monarch or a Buddha.

Despite the comfort and luxury of a royal household, prince Siddhartha left home at age twenty and became a wondering ascetic. He laboured for six long years experimenting with all kinds of spiritual practices and meditation. Then, on the full moon day of the month of Veskha, at exactly thirty-five years of age, he attained enlightenment and became Buddha, 'the enlightened one'.

The Buddha started working hard to spread his teachings and to enlighten the people. During the forty-five years of his mission, he was able to establish his religion, which is now globally known as Buddhism. His followers came from all walks of life -- traders and peasants, Brahmins and outcastes, the rich and the poor, the intellectual and the ordinary. Buddhism is now one of the major world religions and an influential civilising force in human history.

Buddhism is a religion of self-help. Buddhist Philosophy places man at the centre of all things. It advises man to strive and work hard to achieve his material and spiritual goals, through his own efforts, not only through prayer or mere wishful thinking.

Many of the Buddha's principles can be understood through logical reasoning, others can be realised through a proper process of experimentation. The teaching of Buddha, though very old, is still valid and practical, and can be followed with advantage by all people of the world.

Buddhism teaches man to be kind and gentle. The Buddhists are therefore supposed to be peace-loving people and have never made war, or any kind of violence, in the name of the religion.

There are three objects of the highest veneration in the Buddhist religion -- the Buddha, the Dharma and the Sangha (the Holy Triple Gen). The Buddha possesses the noblest virtues and the highest wisdom. In brief his virtues are infinite wisdom, perfect purity, and universal compassion.

The Dharma is the teaching of Buddha. It is the Universal law, which the Buddha discovered and taught the world. In it is the truth itself. And because the Dharma is Truth, it must be true, valid, and universal at all time and in all planes.

The Sangha is the Holy Order of Monks who have attained a high degree of spiritual discipline. The Buddhists pay respect to the Sangha because they are highly spiritual and always try to do good to others. The Buddha, the Dharma, and the Sangha are closely interrelated. All the three are essential for the rise and the spread of the religion.

The Buddha has advised against two extremes, which should not be practiced by Monks. These two extremes are sensual indulgence and self-mortification, as these are not appropriate for holy life. The path that the Buddha advises us to follow is called the Middle path or the Noble Eight ford path, which avoids the two extremes. It consists of eight factors, namely: right understanding, right thought, right speech, right action, right livelihood, right effort, right mindfulness, and right concentration.

In brief the Lord Buddha states the following as the four 'Noble Truths' -- existence is suffering (dukkha), Suffering is cursedly giving (tanha), there is the end of suffering, i.e. nirvana. The Noble Eight-fold path is the way leading to the extinction of Suffering. The four points in the first sermon are collectively called the "Four Noble Truths". They are the embodiment of the whole teaching of the Lord Buddha.

The Buddha left an invaluable legacy of spiritual heritage, which has spread over the world for last 2,553 years. This day is therefore known as the day of “Buddha Purnima” as it commemorates the three important events in the Buddhu's life.