Shanghai, China -- ON a three-day retreat to a Buddhist temple, Nancy Zhang at first wanted to confront the big questions but found herself meditating, watching the sunrise and weeding a garden in peace. 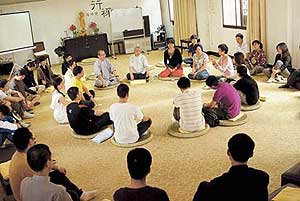 I spent the last holiday weekend at a Buddhist retreat, a little temple near Shaoxing, Zhejiang Province. When I told people I was going with nothing but my thoughts and plans to talk over life with some monks, the reaction was immense.

Friends, colleagues, business acquaintances, even my Chinese teacher wanted to go along. They all had vague questions and unexpressed longings. The search for something other than our materialistic city lives struck a very deep chord.

Some wanted to know how to de-stress and achieve balance. Others wondered why doing all the "right" things didn't take them closer to happiness.

Having grown up in the West, I felt the dry logic of science never gave satisfying answers. In China, it made sense to explore the rich traditions of Buddhism, which has helped people for thousands of years.

Spending time at temple retreats is becoming increasingly popular in modern China, according to the Buddhist Research Institute of Shaanxi Normal University.

I was referred to the Xianghai (Fragrant Sea) Temple by a Chinese friend, and 30 other people joined me for the weekend, with no perceptible marketing from the temple. They had all come by word of mouth, and they were all middle class.

Due to increasing demand, the temple was also building three more blocks.

The reason for this, says psychologist Lin Zi, is that "many of us have knowledge but lack wisdom." Lin founded one of China's first counselling clinics in the late 1990s. She is now in private practice in Shanghai.

"In modern life we chase after external satisfactions, which often leave us internally empty. Spending time at a retreat causes us to look inside. It's an important path to emotional maturity," says Lin.

A fellow participant in the retreat, Yu Zhi is a financial products salesman from Shanghai in his 20s. By the end of the weekend he had decided to formally convert to Buddhism. He told me afterward that he considered the retreat a "holiday for the soul."

"For me, Buddhism is a form of sophisticated enjoyment, because it can teach me so much knowledge," says Yu, adding that many of his colleagues and friends were envious and curious when he told them about his experience.

Set in a small village surrounded by farmland, the temple is beautiful and peaceful.

It operates on a system of trust. In complete contrast to the city, we were told on arrival that "there are no closed doors" in the temple. We left all our valuables in open rooms with complete strangers.

Room, board and lessons with the monks were also free. Donations were voluntary.

In this environment people opened up to a surprising degree. On our first night, seated on bamboo mats around our Buddhist master, we each tried to articulate what we were searching for.

"I feel chaotic," said one successful businessman. "I never make the right decisions," said a young college grad. "I can't find myself," said a tough-looking man in his 30s.

Quite a few participants were psychologists, who felt Buddhism reached a higher part of human experiences than their practices. Spending time at retreats was a mandatory part of many psychology courses.

Many were disillusioned business people, dissatisfied with success and what it takes to make it. All were looking for more from life than a good job, a nice house and luxury cars.

But to start with, our lessons were surprisingly mundane: the proper way to walk, stand, meditate, and even how to hold chopsticks and enter a door (left leg first if entering from the left, right leg on the other side).

Life at the temple was surprisingly hard. Monks live highly disciplined and frugal lives, and we were expected to do the same. There was no talking, and we were up at 4am for chanting, cleaning the temple and meditation - up to three hours a day.

Meditation was a big part of Buddhist practice - it was the path to Nirvana for the Buddha thousands of years ago.

According to psychologist Lin, the health benefits of meditation are scientifically proven. "Studies have shown that during transcendental meditation, a series of physical changes take place, including slowed oxygen consumption and decreased brain wave frequency, leading to deep relaxation of the mind and body."

We started off with six half-hour meditation slots a day. The idea was simple - lotus position with a straight back and no moving - but the execution was hard.

For the first few sessions, I could think of nothing but the pain in my back and legs, I was obsessed with the compulsion to immediately ease my discomfort. However, as I persisted, these compulsions had less and less power and I started to hear the thoughts in my head. I was surprised to find they were mostly rubbish: negativity, other people's opinions and elusive, broken thoughts.

The more I meditated, the quieter the chattering became.

By the third day I could comfortably sit for half an hour and feel peaceful and cleansed afterward.

Back in Shanghai now, I find the retreat experience has increased my focus and organization. I also need less stimulation from mp3, TV and multitasking. I realized my attention span had been chaotically short and over-stimulated by modern gadgetry.

Learning to meditate was a metaphor for the temple's lessons. Finding the answers to life's problems takes hard work, and many people gave up.

By the end of the first day's early rising, labor and meditation, several participants had already decided to go home.

On the second day I was weeding the temple gardens at 5am. I wondered when we would get to the big questions.

If nothing is forever, why should we care? Can people change? What is worth believing in?

We had been reminded of the mundane aspects of life, like weeding the garden, but there wasn't much on the big theories. Just then the sun rose - a flaming orange disk, intense and brief as life itself. It graced the sky for a few minutes, and then it was gone.

I started to appreciate getting up at 4am, with only six hours of sleep. According to the Buddhist idea of fate, each thing in life is made up of countless conditions, and when these conditions change, the thing also disappears. Respecting time means you appreciate its impermanence.

Buddhism is also considered by some as a "pessimistic belief," because it says that suffering is the normal human condition. When we complained about the daily routines, or being made to sit and eat in the proper posture, our master gave us a wry look and said, "Life is full of problems. If you cannot even deal with these small things, how will you face life's challenges?"

Like cognitive behavior therapy, Buddhism is a very practical belief. Our master repeatedly said that it was two parts theory, and four parts action. People change by changing their habits.

"Buddhist retreats aid personal development to a high level. In this respect it has the same aim as psychology, and the two have many areas in common," says psychologist Lin.

But there were things nobody could tell me. At the end of the weekend, we talked freely with the monks in their old Chinese library, over tiny cups of tea. They were guardians of traditions and values that had disappeared from much of China.

The monks were deeply aware of their responsibility. Our master had given up the world for the temple just after graduation. But surprisingly, he said that he struggled with this decision every day, and has done so for 20 years.

It seems that pursuing material comfort and wealth is the clearest, and in some ways, the easiest option, as the inner journey is a hard one.

Advice from Lin Zi on making the most of your retreat: