A mind of pure Gold

Phra Ajaan Lee Dhammadharo (1907- 1961) or Phra Suddhidhammaransi Gambhiramedhacariya was one of the foremost teachers in the Thai forest ascetic tradition of meditation that was founded at the turn of the 20th century by Phra Ajaan Sao Kantasilo and Phra Ajaan Mun Bhuridatto. His life was short but eventful. Known for his skill as a teacher and his mastery of supernatural powers, he was the first to bring the ascetic tradition out of the forests of the Mekhong basin and into the mainstream of Thai society in central Thailand. This is a collection of 16 Talks on Buddhism and Meditation by Ajahn Lee, translated by Ajahn Thanissaro. The talk was delivered in July 1958. 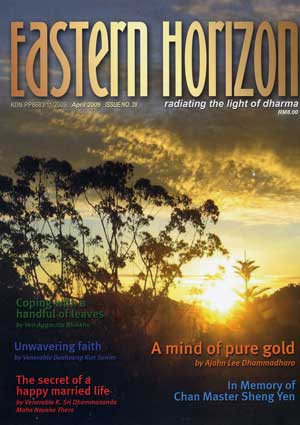 The mind, the Buddha said, is like gold. An impure mind is like gold adulterated with various minerals that will make it hard and unmalleable.

Before it can be put to use in any way, it first has to be melted down and its impurities — the various adulterations — removed completely. Only then will it be genuine gold, soft and malleable. Our mind, which is adulterated with various preoccupations, first has to be put into shape, and its impurities — its various defilements — completely removed. Only then will it be a pure mind, becoming a thing of supreme power and usefulness, like genuine gold malleable enough to be melted and poured into anything at all. A pure mind can pour around the world without getting snagged and can roll all around itself, like a bead of water on a lotus leaf, which will roll around without seeping into the leaf.

This is what is meant by a mind that is Dhamma. Or you might compare a pure mind to genuine beeswax, which doesn’t need fire in order to melt. No matter how large or small a lump it may be, all it needs is a little sunlight or just the warmth of your hand, and it will be soft and malleable enough for you to form it into any shape at all. A pure mind can be put to every sort of use in line with your aspirations in just the same way. This is why the Buddha taught that every sort of achievement depends completely on the power of the mind.

Things that are genuine or pure, even though they may be small, can give rise to enormous results, just as a piece of genuine paper money — a tiny little slip of paper with the state seal — can be put to use in all sorts of ways. But if it’s newsprint, even a bushel of it wouldn’t be able to buy a thing. In the same way, a pure mind — even if we can make it pure for only a little while — can give results way in excess of its size.

People who are really intent on purifying the mind may even lift themselves over and beyond the world. So we’re taught that people whose minds aren’t pure — regardless of whether they’ve given donations or observed precepts by the tens or hundreds of thousands — may not escape going to hell. At best, they may make it back only as human beings. A mind adulterated with bad preoccupations will have to go to a bad bourn. A mind adulterated with good preoccupations is bound for a good bourn, as a heavenly being. A pure mind, though, will go above and beyond all this.

For this reason, you should focus on watching only your mind. Don’t let your attention go leaking out your ears, eyes, nose, tongue, or body. If the mind is murky, make it clear. Keep trying to chase away its various preoccupations until they’re completely gone, leaving only the genuine gold: a pure mind. Set your heart on doing it right now.

‘The five khandhas are truly a burden.’ The body is heavier than rock. How is it heavy? It’s big. Weighty. Enormous. Its mouth can eat cattle by the herd, rice by the ton, and yet never be full for a second. You have to keep finding things to stuff in it all the time,
which is a burden to the heart. We’ve been shoring up this body ever since we were little and red so that it will stay with us, and yet it won’t stay. What does stay is nothing more than scraps. What’s good leaves us completely. Don’t go thinking that it’ll stay.

The part that’s left loads us down, creating stress and pain. So we’re taught to let go. Caga: Relinquish what’s outside, i.e., the body; and let go of what’s in the mind, i.e., its various preoccupations that follow along with the world. If we can let go of these things, we’ll be light in body and mind. And when we’re light in this way, we can be at our ease.  Then we can consider further that all these things fall under the truths of the world. That is, they’re inconstant, stressful, and not-self. They make us misconstrue everything, just as when we let ourselves get duped into spending our money.

There are people, for instance, who make sugar water with various colors for us to drink at 10, 20, or 30 cents a glass. Actually, it’s no different from the ordinary water we drink, but we have it all misconstrued and think that it’s something special — so we’ll come back to spend more money to drink it again. This is inconstancy. It’s like waves that keep rising and falling, causing us to waver, keeping us from being still and at peace. When we see this, we should incline our hearts toward being trained in the Dhamma.

A person who lets the mind be defiled is like someone who lets his children play in the mud: They’re bound to cause hardships for their parents, and not only that, they’re bound to cause hardships for themselves, because they have no livelihood, no basis for setting themselves up in life. So we should train our hearts to be adults in order to outgrow our defilements and corruptions.

We shouldn’t let ourselves get tied up in worldly affairs, because they’re good only from age 20 to 40. From that point on, our mouth gets smaller and smaller, our eyes get so small we can scarcely open them. Whatever we say doesn’t get past our lips. Our hands get so small that we have to give them a one-meter extension called a ‘cane.’ Our back gets crooked — and with the body sure to run down like this, what are we going to want out of it? It’s enough to make you heartsick. So we should develop what’s good and becoming within ourselves. Develop goodness into a Noble Treasure. In other words, relinquishment (caga) and virtue (sila) are two things we should foster in our hearts so that we can begin to grow up, unfold, and go beyond being children...

Once we’ve reached the middle of life, things start getting shorter and shorter, so we’re taught not to be complacent. Whatever will give rise to knowledge, we should stir ourselves to pursue, like a child who studies math without playing truant or thinking only of fun and games. Such a child is sure to have a high level of knowledge in the future.

People in this world — even though they may be 80 years old — if they stay sunk in worldly matters, are still children. Relinquishment and virtue: Once we give rise to these things, we’re headed for adulthood. Otherwise, we’re still children. So we shouldn’t let the heart settle on things that aren’t good for it.

Sometimes there are both good and bad things. The good things are hard to latch onto; the bad are easy. If we give our children free rein to go playing, they’ll for the most part bring us nothing but trouble. Sometimes they hang around doing nothing at all and yet come back with other people’s belongings in their pockets. In other words, sometimes other people do something, and yet we let it get stuck in our hearts.

This is being infantile. Our minds are a mess of defilements, which is why we’re said to be children. So we should consider things carefully. Whatever will benefit us, we should take an interest in. If a poor person wanders shiftlessly about, nobody pays any mind; but if a rich person behaves that way, people really despise it. In other words, we shouldn’t let our hearts go lurking about in shoddy or unwise preoccupations. We have to practice tranquillity meditation to make the mind still. That’s when we’ll begin to enter adulthood.

When the mind is still, it gradually gives rise to discernment, just as a kerosene lantern we keep looking after — adding kerosene, making sure that nothing disturbs the flame — is bound to grow bright. The wick is the breath, the theme of our meditation. The effort we make is like the kerosene.

We keep looking after the mind, making sure that the various preoccupations coming in by way of the eyes, ears, nose, and so forth, don’t collide with the heart. The mind will become bright and dazzling, like the wick of a kerosene lantern that we keep fed with fuel and whose burnt parts we keep scraping away.

If liberating insight arises, we’ll see the absolute truth — that all our preoccupations are inconstant, stressful, and not-self — appearing in our heart. When we can see things clearly in this way, we’ll be able to let go of our various preoccupations. The mind will give rise to a brilliant radiance — termed dhammo pajjoto, the light of the Dhamma — and we’ll attain to the transcendency of the mind. When we reach this point, that’s when we’re said to have grown up. We can go wherever we like, for no one will be able to pull the wool over our eyes. EH