The Creation of the Order of Siladhara

In this brief account Ajahn Sucitto offers an outline of the considerations that went into formulating a Rule for the nuns. It would take volumes, however, to do justice to the remarkable, steadfast commitment he showed and the enormous effort – on every level – made by the nuns themselves and everyone involved, over those seven years.

Hertfordshire, UK -- I have spent all but a year or so of my 32 years of monastic life living in monasteries with nuns. Actually it all depends what is meant by living with, and what is meant by nuns. 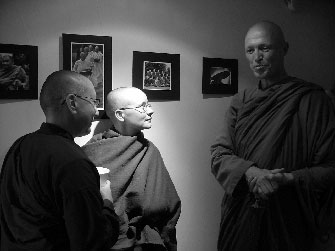 In Thailand the monastery I was living in had many maechees, that is shaven-headed women keeping the Eight Precepts, practising meditation, virtue and renunciation, and often making commitments of many years. Yet the culture then as now, to a large extent, did not regard them as a female equivalent to the monks – the bhikkhus.

The status of the bhikkhus, independent of their personal qualities, was totemic: their form carried the weight, sanctity and auspiciousness of the Buddha- Dhamma in a society where correct ritual observance, and charismatic qualities carry as much and even more significance than the teachings themselves.

For a son to become a bhikkhu is a source of great merit to a parent; for a daughter to become a maechee is likely to be a disappointment. She may well be seen, not as a daughter of the Buddha, but as a misfit who doesn't have a husband and won't bear children. However crude these generalizations may seem, they do carry a good deal of truth.

Meanwhile, although I didn’t see them that often, the maechees themselves seemed content to have a place to practise and offer service to the monastery. Maybe what they had was good enough for Dhamma practice … and anyway I had enough to be dealing with in my own mind to even offer much consideration to the state of nuns, the monastery or even Buddhism. The whole thing seemed to be chugging along in some mysterious way, offering support and benefits to many folk. Everything seemed stable, unquestioned, and contented: this set-up had been going on for over seven hundred years.

When I returned to Britain in 1978, things were anything but stable, unquestioned and contented. The English Sangha Trust was just coming out of suspended animation brought about by the disrobing of the last of its resident bhikkhus in the 1970s and the conclusion that living the bhikkhu life in the West was not possible or relevant. When I arrived in 1978, it was looking for a new direction under Ajahn Sumedho, following the systems and teachings given by Ajahn Chah. The resident community comprised three bhikkhus, three samaneras and three anagarikas, jammed together in a house in Hampstead. Pretty soon we were to be moving to a very uncertain future in a derelict house in West Sussex.

And there were Western women who wanted to join the monastic community. When one of them asked Ajahn Sumedho about becoming a nun, he turned to me (for rhetorical effect, I imagine: I was far too green to be a source of informed wisdom) and asked what we should do.

My comment was that it would be good if Katie would show us how to live as a nun in the West. Anyway, Ajahn Sumedho must have already decided to give the idea a chance, because within weeks of moving into Chithurst House in 1979, Katie and three others started out by cropping their hair, wearing white and taking on the eight-precept training.

What became clear was that it wasn't easy. The sisters seemed to find a comfortable niche in the community in the kitchen, garden and in supporting the monks, but with the four of them sharing one room in the House, and later a small cottage, there were difficulties.

A year or two into their training, they were looking for something that would give them a stronger basis in renunciation rather than just community service. Ajahn Sumedho's response was to look into the possibilities of their taking the Ten Precepts (dasa-sila) and with the relinquishment of money, of the cooking and driving duties, to live more fully as alms mendicants. In 1983 he obtained permission from the Thai Sangha to give the pabbajja, the ‘Going Forth’ which formalizes an individual’s determination to live this renunciant life.

This raised some objections in Thailand from the more conservative laypeople – predominantly women – to whom the robe was a sacred object that should only be worn by males. We compromised by using a dark brown colour for the robe. Meanwhile, for their part, our four nuns had no experience of the protocols and community structures that come along with the training for a monk.

So despite taking the Ten Precepts, they had had no guidance in regard to the detailed training in conduct and deportment that comprises the Vinaya: matters such as how to handle the robes and bowl, how to sit in an upright and composed manner, how to live in a respectful but not stiff way with seniors, how to handle differences of opinion and know the time, place and means to arrive at decisions.

A novice monk (samanera) picks up a lot of know-how just from living in close proximity to the more experienced monks. But nuns didn't live in a close informal way with the monks. Therefore … Ajahn Sumedho asked me to be their teacher.

I spent a great deal of time instructing the nuns from 1983 until 1990. I spent as much time listening to their concerns, difficulties and expressions of gratitude. All of this meant that I spent a good deal of time considering their training, consulting such texts as I could find on male ten-precept, that is samanera, training and reviewing the bhikkhuni training rules. I did this even though there was no agreement to establish a bhikkhuni training system, and we were led to believe that the procedure for giving upasampada (‘Acceptance’ or ‘higher ordination’) to women had died out.

Yet, I had to consider the welfare and training of the nuns in the here and now. It was clear they couldn’t have a training through the medium of one-to-one contact with the monks, neither were they novices making a tentative commitment to the Holy Life for a year or two; they needed a system that they managed themselves. So it seemed responsible to at least look at how the Bhikkhuni Order had functioned, what challenges it had faced, and how the Buddha had responded to the issues of the time, just to get some guidance.

What was needed were guidelines for community living, on making decisions, as well as on topics more relevant to women such as their protection from sexual harassment. The nuns whom I was trying to support were certainly keen, committed, worthy and capable of taking on a Holy Life. The more I listened and studied and thought the more it seemed possible to develop protocols and ways of conduct within the framework of the Ten Precepts – including matters of deportment, of how to look after the bowl and robes and so that they would be able to function independently as a community.

As I formulated the training guidelines, I'd pass them by Ajahn Sumedho, then talk to the nuns about them and listen to feedback. Every year or so, the ongoing training system would be reviewed by the senior monks of the community. I also consulted the senior Sri Lankan Sangha in Britain, and visiting Thai Ajahns.

They all seemed satisfied that things were going in the right direction, and some offered help with details of procedure regarding the going forth ceremony itself, or of Pali technical terms. Gradually a consensus regarding conventions was arrived at.

The last piece that I was part of formulating was the procedure for admission to the community of nuns (‘ordination’) itself. This is crucial because it sets up the firm outlines of what a samana has to refer to in his or her training. Apart from the training, there is also the definition of whom the newly-admitted person will look to for guidance. So for the Going Forth, there is the preceptor – in this case Ven. Ajahn Sumedho; and in the Acceptance or ‘higher ordination’ there is the community.

The community is as important as the preceptor. The Bhikkhu Sangha requires a community of at least five monks to accept a new bhikkhu. The question that arose was, what community ‘accepted’ the nuns?

A community of monks seemed necessary to confer the validation of the ongoing lineage. But on a day-to-day level, each nun would be living in a community of nuns, which she would wish to respect, work with and seek support from. Once again, the precedent for bhikkhunis seemed to hit the mark exactly: to be accepted first by the nuns into their community, and then offered a further validation by the order of monks.

In all of this, I was aware of the current Bhikkhu Sangha, the bhikkhunis of the past and the opinions of contemporary Buddhists East and West ‘looking over my shoulder’ so to speak. Was all this suitable, was it fair, was it legal? What makes something legal? Who has authority? Regarding this point, and with remarkable foresight, the Buddha did determine a series of decision-making parties: that of the Buddha; that of the Sangha as a whole; that of a group of elders, and finally that of a single elder. In the case of the nuns and their training,
Ajahn Sumedho had received permission from the elders of the Thai Sangha for a ten-precept pabbajja for women; and the group of elders of our community in Europe had agreed to all the procedures that we now use. It seemed good enough to present a good opportunity for women to live the Holy Life.

I have always felt that the larger issue of bhikkhuni ordination and training is a matter in hand, both in terms of legal procedure, wider Sangha consent, and of course the interest and capacity of the nuns. Because, as the siladhara training became established, one aim and result was that it no longer needed me to guide it.

This point was reached in 1991, when the nuns came to a decision that my services would no longer be needed in that respect. And although my past role and ongoing interest still make me concerned for the welfare of the nuns, I appreciate that too close an involvement now is something that could be sensed as sticky and patronizing.

Coming to the West has always entailed trying to juggle between the Thai tradition that is our root and inspiration and the values of the West. With regard to the religious role of women, there is a gulf between the two, and this gulf has always had its effect on how the nuns sit within the Sangha – that despite their commitment, leadership and teaching skills, some people still don’t regard them as members of the ‘Sangha.’

This alone may be adequate cause to undertake the bhikkhuni ordination and training. But whichever way the nuns’ order develops, I feel I have myself learned, or been through, a lot on account of this involvement. There have been the conflicts of the emotional (and sexual) energies that can be aroused through male-female contact with the need to maintain clarity of intent.

I have been offered trays of flowers and had things thrown at me. And there is the ongoing dilemma of being a 20th century westerner (and ex-hippy to boot) with the cultural attitude of male-female parity, yet committed to a Buddhist lineage that has non-parity at the roots of its conventional structures. I have no doubt been less than perfect under the stress of all these conflicts, but it has left me with no solid ground. And for that I am grateful.