In this exclusive interview with the Buddhist Channel, Ajahn Sumedho – the foremost western disciple of the late Ajahn Chah – talks about how gratitude and respect for tradition have preserved and sustained his training as a monk. And in the process, he explains how these values have preserved the Thai forest tradition, the Buddha’s pristine Dhamma and its spread throughout the world. 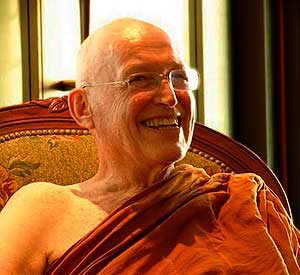 Gratitude seems to be a virtue that is seldom emphasized. How important is it in our practice?

In our training as monks, we are taught to reflect on the four requisites. As samanas, or alms mendicant, we volunteer to live in a way that requires us to be content with just the basics. This means giving up rights to do what we want, giving up relationships and the desire to live within conventional structures. Especially so when we were practicing in the North East region of Thailand in the 70’s, these “basics” were actually very low level material conditions.

Life with Luang Poh Mun and Luang Poh Chah was very traditional. Conditions were not ideal. The people were very poor. Sometimes we had to walk miles and at the end of it we were just given coarse food by the villagers. Yet living with Luang Poh Chah under strict Vinaya rules was an excellent way of training.

Luang Poh Chah was always pointing out to emptiness, of Dhamma nature. And when conditions were less than ideal, we were taught to be aware and be mindful about conceit, about how the mind reacts to less than ideal conditions.

Being American, naturally it is not part of our culture to think like this, more so coming from a Southern Californian, Christian liberal environment. Of course, any environment tends to bring about cultural conditioning that fosters the establishment of underlying attitudes and assumptions. These attitudes are so subtle that it makes it difficult for us to consciously recognize their traits, especially with a “thinking mind”.

As a westerner, we have a tendency to feel more advanced than others. Not that we look down on people, its’ just that natural tendency to feel that perhaps there were better ways to get things done.

And yet, despite all these advantages, I still felt that I was manipulating my life to attain goals which I deemed as desirable. Personally speaking, I do have a strong will, and this has led me to accomplish many things. But I didn’t find this a particularly useful way to live. It did not seem to bring peace, and certainly was not liberating.

When I first came to live in Wat Pah Pong, one of the first things that I had to give up was this cultural attitude, these western based views. Living in poor districts like the Thai Northeastern region forced the mind to be more grounded, to make it continuously look at the basics.

Luang Poh Chah would always talk about observing the mind in such “less than ideal” situations.

Conversely, when we go to more prosperous regions like Chonburi, where richer devotees would serve glorious, sumptuous foods, we were again taught to observe the mind, to see the nature of greed, to observe the guilty feeling that arises from consuming such luxurious meals.

These kind of training are actually good psychology. In moments when there is anger, we can watch the mind, and note what is feeling and what is ideal. To have a mind trained to view things “as they are” is a very helpful method to improve things. Being a much grounded teacher, Luang Poh Chah’s great strength lies in his ability to be aware of human limitations, and not being judgmental.

As Luang Poh Chah’s fame grew over the years, many more western students came to Wat Pah Pong to become monks. As the senior western monk who not only lived in Thailand for many years, but one who had adjusted to Thai life, it was natural that I became an interpreter. But it was something I didn’t really want to do. 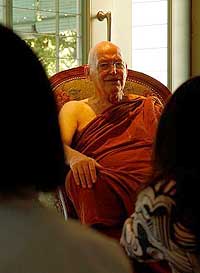 The Buddhist word in Pali for gratitude is Kataññuta. Understanding it deeply means not just repaying debt but to give with joy, not thinking of “I”, myself. And it is on this basis that I have been operating ever since." - Ajahn Sumedho  >>

It was then after the 6th Vassa, that I decided to leave Wat Pah Pong and go to India and see if I could live there. I always had strong interests in Asia and had completed my BA in Chinese studies and MA in South Asian studies so India was a natural choice, not just because it was the birth place of Buddhism.

It was during the separation of East Pakistan (later to be known as Bangladesh) from West Pakistan when I arrived in Calcutta. There were a lot of refugees streaming into the city. And beggars were everywhere. Then a thought occurred to me: I was just one of them. An alms seeking monk was no different than a beggar on the street.

But even in the land of the Buddha’s birth, there was not much opportunity for the locals to support a monk, what more a monk from the forest tradition. For proper support, I had to travel from Calcutta to Bodh Gaya, and devotees of the Mahabodhi temple there arranged for pindapata (alms giving), the first time since I arrived India.

After five or six months in India, I had this sudden realization recalling all that was given to me by Luang Poh Chah, the Thai people and the Thai immigration (who gave me a permanent Visa). There was this overwhelming sense of gratitude for all the requisites, encouragement and respect given to me by the people of Thailand. It was a realization that who – and all - that I had become then was a result of the generosity and kindness of others. So in a way, this was not just any realization, but an opening of the heart, of giving up self-centeredness.

This was a breakthrough somewhat because even when I was in samatha (concentrated state) where there was tranquility, it was not truly liberating.  It was because there was still this continued thinking of “I”, “myself”, this self-centeredness despite the many vassas spent as a full time meditating monk.

The Buddhist word in Pali for gratitude is Kataññuta. Understanding it deeply means not just repaying debt but to give with joy, not thinking of “I”, myself. And it is on this basis that I have been operating ever since.

I then decided to go back to Thailand to help Luang Poh Chah and to fulfill his wish to help the western monks. This was when Wat Pah Nanachat was founded, a monastery set up primarily to assist the training of Western monks.

Today there are more than 300 forest tradition monasteries all over the world. All these development were made possible with support from Luang Poh Chah, who was first invited to go to England in 1977 to meet with the English Sangha Trust.

The Thai Sangha, Mahatherasamakom was also incredibly generous and helpful in the establishment of these monasteries. Such generosity gave rise to strong, unifying bonds of gratitude and respect among Luang Poh Chah’s disciples that laid the foundation of the forest tradition of the Western Sangha to be what it is today.

The practice of the forest tradition is about attaining personal release (from samsara). If there is a conflict between personal practice and social conventions, such as Bhikkuni Ordination, what would Luang Poh's advise be?

In the Thai Forest Tradition, there are many views with regards to Bhikkuni Ordination. Not everyone is in agreement with one another. Speaking of myself coming from a western society, it can be said that most western Buddhists do not really understand (Thai Sangha) tradition. Many have asked what could possibly be wrong with helping women to become nuns.

But this is the very gist of the dichotomy between tradition and social conventions. Western views hold on to notions of individual rights, gender equality and social justice. But in the Sangha tradition, it’s about giving up rights, of performing specified duties as stated in the Vinaya. This is not something that is new, as the Vinaya has withstood 2,552 years of facing change and challenges, be it politics, economics and social conditions.

The Buddha left us just two legacies, Dhamma and Vinaya. The Dhamma is about letting go, about personal liberation. The Vinaya is about rules and how we relate to the world as renunciates. Many westerners see the Vinaya as restrictive, and have always tried to make changes to the Vinaya so that it meets modern challenges. And yet, duties (as to how the Sangha relate to the world) are not always given due mention.

As we allay ourselves to these ideals, we continue to struggle with the world. This is not what the Vinaya is all about, which is about giving up rights and performing duties as members of the Sangha.

In our practice, we train the mind to go beyond dualistic thinking. As we are not culturally conditioned to do this, we have to go for training, in deep practice, to transform our consciousness so that we become mindful before we think and act and before we become emotional.

This is the path to liberation. It’s not about making anything becoming equal. This teaching is not restricted to any views, and is available to all.

Unfortunately, conventional structures – between what is traditional and what is modern - is what people argue over all the time. We are constantly facing pressure to change tradition so that it falls in line with modern society.

So in this sense, I can’t really see myself how I could go about engaging in Bhikkhuni Ordination. It is beyond my ability even if I wanted to. I just can’t. It’s like me being a violin player and being asked to teach another to play the piano. I just would not be able to do it. So

the best that we could do is perhaps play our own instruments in our own way and perform in harmony together. The best I could do was to form the Siladhara order *, where women renunciates also live depending on alms and obtain the same teachings made available to all.

This brings us back to the matter of Bhikkhuni Ordination. The attitude in Thailand is that women can become Bhikkhunis, but if they wanted to do so they will have to do it in the Mahayana tradition.

In light of the issue of the Perth incident, and the Thai Sangha's opposition to Bhikkuni Ordination, what advice can Luang Poh give to lay people so that the situation is not further aggravated?

We need to watch and reflect on our thoughts, speech and action. We need to be aware and mindful, not to create divisions, like choosing sides. These are dualistic actions, and are based on ignorance.

Part of our process of learning and understanding is to open up and to listen. These are important, so that we may not go on and create even more dualistic views.

----------
* Note: While still officially novices in the eyes of the Thai Sangha heirarchy, and thus not as controversial as Bhikkhuni Ordination, this form of discipline included a training and discipline in more than 100 precepts, and became known as the Siladhara ordination, and the community of nuns in England following this discipline, the Siladhara Sangha.

Ajahn Sumedho was in Malaysia for two weeks in January and participated in the “Ajahn Chah Remembrance Day” event on January 16, 2010.