Many Faiths, One Truth

New York, USA -- WHEN I was a boy in Tibet, I felt that my own Buddhist religion must be the best — and that other faiths were somehow inferior. Now I see how naïve I was, and how dangerous the extremes of religious intolerance can be today. 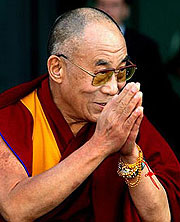 Though intolerance may be as old as religion itself, we still see vigorous signs of its virulence. In Europe, there are intense debates about newcomers wearing veils or wanting to erect minarets and episodes of violence against Muslim immigrants. Radical atheists issue blanket condemnations of those who hold to religious beliefs. In the Middle East, the flames of war are fanned by hatred of those who adhere to a different faith.

Such tensions are likely to increase as the world becomes more interconnected and cultures, peoples and religions become ever more entwined. The pressure this creates tests more than our tolerance — it demands that we promote peaceful coexistence and understanding across boundaries.

Granted, every religion has a sense of exclusivity as part of its core identity. Even so, I believe there is genuine potential for mutual understanding. While preserving faith toward one’s own tradition, one can respect, admire and appreciate other traditions.

An early eye-opener for me was my meeting with the Trappist monk Thomas Merton in India shortly before his untimely death in 1968. Merton told me he could be perfectly faithful to Christianity, yet learn in depth from other religions like Buddhism. The same is true for me as an ardent Buddhist learning from the world’s other great religions.

A main point in my discussion with Merton was how central compassion was to the message of both Christianity and Buddhism. In my readings of the New Testament, I find myself inspired by Jesus’ acts of compassion. His miracle of the loaves and fishes, his healing and his teaching are all motivated by the desire to relieve suffering.

I’m a firm believer in the power of personal contact to bridge differences, so I’ve long been drawn to dialogues with people of other religious outlooks. The focus on compassion that Merton and I observed in our two religions strikes me as a strong unifying thread among all the major faiths. And these days we need to highlight what unifies us.

Take Judaism, for instance. I first visited a synagogue in Cochin, India, in 1965, and have met with many rabbis over the years. I remember vividly the rabbi in the Netherlands who told me about the Holocaust with such intensity that we were both in tears. And I’ve learned how the Talmud and the Bible repeat the theme of compassion, as in the passage in Leviticus that admonishes, “Love your neighbor as yourself.”

In my many encounters with Hindu scholars in India, I’ve come to see the centrality of selfless compassion in Hinduism too — as expressed, for instance, in the Bhagavad Gita, which praises those who “delight in the welfare of all beings.” I’m moved by the ways this value has been expressed in the life of great beings like Mahatma Gandhi, or the lesser-known Baba Amte, who founded a leper colony not far from a Tibetan settlement in Maharashtra State in India. There he fed and sheltered lepers who were otherwise shunned. When I received my Nobel Peace Prize, I made a donation to his colony.

Compassion is equally important in Islam — and recognizing that has become crucial in the years since Sept. 11, especially in answering those who paint Islam as a militant faith. On the first anniversary of 9/11, I spoke at the National Cathedral in Washington, pleading that we not blindly follow the lead of some in the news media and let the violent acts of a few individuals define an entire religion.

Let me tell you about the Islam I know. Tibet has had an Islamic community for around 400 years, although my richest contacts with Islam have been in India, which has the world’s second-largest Muslim population. An imam in Ladakh once told me that a true Muslim should love and respect all of Allah’s creatures. And in my understanding, Islam enshrines compassion as a core spiritual principle, reflected in the very name of God, the “Compassionate and Merciful,” that appears at the beginning of virtually each chapter of the Koran.

Finding common ground among faiths can help us bridge needless divides at a time when unified action is more crucial than ever. As a species, we must embrace the oneness of humanity as we face global issues like pandemics, economic crises and ecological disaster. At that scale, our response must be as one.

Harmony among the major faiths has become an essential ingredient of peaceful coexistence in our world. From this perspective, mutual understanding among these traditions is not merely the business of religious believers — it matters for the welfare of humanity as a whole.

--------
Tenzin Gyatso, the 14th Dalai Lama, is the author, most recently, of “Toward a True Kinship of Faiths: How the World’s Religions Can Come Together.”