Bangkok, Thailand -- Phra  Acharn Tusit has been a member of the Thai Sangha for eight years. In the vicinity of his township Sattahip, in Eastern Thailand, it is common to sight him among his brother monks walking in single files, doing his alms rounds. 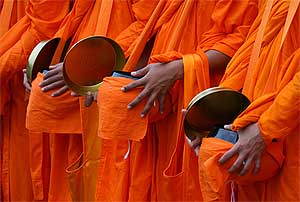 << During vassa, monks stop doing their alms round for lay people to offer "TAK BAT", or giving alms to monks. Photo by Bertrand Linet

The local knows him as the monk with eight vassas, that is, the number of times he has spent the rain retreats. Not too old and not too young in the spiritual life, nevertheless he is dwelling well on the Master’s Dharma path.

Around the month of July, as the southwest monsoon calls to port in South East Asia, Phra  Acharn Tusit like the rest of the Sangha members, stop their alms round and settle in their temple compound.

Vassa (from Pali - vasso, Burmese - waso, Thai - pansa or phansaa), also called Rains Retreat, is the traditional retreat during the rainy season lasting for three lunar months from July to October. During this time Buddhist monks remain in a single place, generally in their temples. In some monasteries, monks dedicate the vassa to intensive meditation.

During vassa, many lay people reinvigorate their spiritual training and adopt more ascetic practices, such as giving up meat, alcohol, or smoking. Vassa is sometimes known as "Buddhist Lent", though at least one prominent Theravada monk has objected to this usage.

In countries such as Thailand, the laity will often take monastic vows for period of vassa and return to lay life afterwards. Commonly, the number of years a monk has spent in monastic life is expressed by counting the number of vassas he has observed.

The vassa retreat has largely been given up by Mahayana Buddhists, as Mahayana Buddhism has typically flourished in regions without a rainy season. However for Mahayana schools such as Zen and Tibetan Buddhism other forms of retreat are common.

The observation of vassa is said to originate with the Buddha himself. Gautama Buddha ordered his disciples to observe a pre-existing practice whereby holy men avoided travel for a three month period during the rainy season, in order to avoid damaging crops.

Vassa begins on the first day of the waning moon of the eighth lunar month, the preceding day is Asalha Puja. The focus of celebration by the laity is the first day of vassa during which worshippers donate candles and other necessities to temples, in a ceremony which has reached its most extravagant form in the Ubon Ratchathani Candle Festival. Vassa is followed by two of the major festivals of the year among Theravada Buddhists, Wan Awk Pansa and Kathina.

The end of vassa is marked by joyous celebration. The following month, the kathina ceremony is held, during which the laity gathers to make formal offerings of robe cloth and other requisites to the Sangha.