Paris, France -- There is something extraordinarily child-like about the 84-year-old Zen Buddhist master Thich Nhat Hanh. 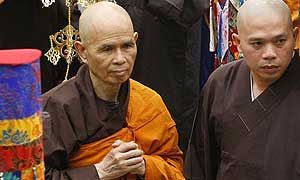 To portray him out of context could make him appear naive and unworldly. It is therefore understandable that he does not like to be interviewed by journalists who have not already spent some time in his presence and meditated with him. Perhaps that is why refused on interview with the Daily Mirror after the paper apparently demanded that the piece be illustrated with a photo of him alongside a group of celebrities.

After having a rare personal audience with him for five days during a retreat in Nottingham which nearly a thousand other people took part in, I have come to recognise that his way of being could be an antidote to our politicised and intellectualised world.

He has an uncanny ability to help clear away the complexities of our lives by reminding us to think about the essence of who we are and offering some simple steps to challenge our habitualised problems and neuroticism.

In recent years, he has turned his full attention to the dangers of climate change and recently published the best-selling book The World We Have – A Buddhist Approach to Peace and Ecology.

He discusses in the book how he sat and consulted with the Buddha for many hours and came away with the recognition that we could be facing the end of our civilisation unless we can achieve a spiritual awakening and change our individual and collective behaviour.

"In my mind I see a group of chickens in a cage disputing over a few seeds of grain, unaware that in a few hours they will all be killed," he writes.

Above all else, Thay – as he is known – teaches that the world cannot be changed outside of ourselves. The answer is for each one of us to transform the fear, anger, and despair which we cover-up with over-consumption. If we are filling our bodies and minds with toxins, it is no surprise that the world around us also becomes poisoned.

He also argues that those who put their faith in technology alone to save the planet are bowing to a false god.

Like many other spiritual leaders, he sees the genesis of our pain as coming from our dualistic mindset that sees our connection to god, or Buddha, or spirit as outside ourselves and accessible only after our death. As a result we have developed a strong ego that sees itself as separate and threatened and needs to amass things like wealth to feel strong and protected. But none of these can fill the chasm created by our deep sense of separation.

He condones eco-activism but only if done with the right motives:

"I know ecologists who are not happy in their families. They work hard to improve the environment, partly to escape their own unhappy family lives. If someone is not happy within herself, how can she help the environment?"

"The energy we need is not fear or anger, but the energy of understanding and compassion. There is no need to blame or condemn. Those who are destroying themselves, societies and the planet aren't doing it intentionally. Their pain and loneliness are overwhelming and they want to escape. They need to be helped, not punished. Only understanding and compassion on a collective level can liberate us."

Thay believes that within every person are the seeds of love, compassion and understanding as well as the seeds of anger, hatred and discrimination. Using a gardening metaphor, he says our experience of life depends on which seeds we choose to water.

To help water those positive seeds and create a new global ethic, Thay's Order of Interbeing has distilled the Buddha's teachings on the Four Noble Truths and the Eightfold Path into five core principles.

The Five Mindfulness Trainings, updated in the last year to make them relevant to our fast-changing world, are not a set of strict rules but a direction to head in.

Thay explains that in the First Training we vow to cherish all life on Earth and not support any acts of killing. In the Second Training we pledge to practice generosity and not support social injustice and oppression. In the Third Training we make a commitment to behave responsibly in our relationships and not engage in sexual misconduct. The Fourth Training asks us to practice loving speech and deep listening in order to relieve others of suffering. The practice of mindful consumption and mindful eating is the object of the Fifth Mindfulness Training.

While Thay sees following these trainings as a way out of the environmental mess we are in, he is not certain that people are yet ready to change their consumerist way of life.

"Without collective awakening the catastrophe will come," he warns. "Civilisations have been destroyed many times and this civilisation is no different. It can be destroyed. We can think of time in terms of millions of years and life will resume little by little. The cosmos operates for us very urgently, but geological time is different."