Kuala Lumpur, Malaysia – World renowned Venerable Thich Nhat Hahn in his keynote address at the World Buddhist Conference 2010 currently held in Kuala Lumpur, Malaysia, have urged politicians in parliaments, business executives in corporations, teachers in classrooms and families to adopt the “5 mindfulness training” as first steps in redeeming this planet from our destructive tendencies. 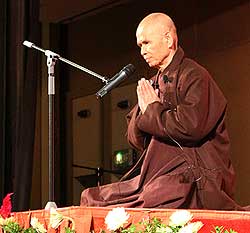 By way of integrating the “5 mindfulness training” (which is based on the 5 moral precepts ) into the core values of the mentioned institutions, Thich Nhat Hahn says that such collective effort will be able to bring about happiness and the well being of the world.

“When we implement these mindfulness trainings with understanding and compassion, we transfer happiness to the world. Corporations using these trainings will be able to realize profit not just in terms of making money, but profits that can also help to protect the planet,” reasons the venerable.

This famed Zen Master said that it was possible for corporations or parliaments to cultivate happiness and compassion within. He explained that each of these institutions can be treated as Sangha, very much like the traditional community of monks and nuns.

As with the Sangha, he says that these entities can also practice deep listening and loving speech. When they do this, then they will be opportunities to transform the parliament, corporation, classrooms and families in Sangha.

“When this happen, we will be able to understand the suffering of each other, and our actions shall bring good happiness and well being to the world,” he said.

The venerable pointed to a situation as to how the current generation had failed future generations.

Citing unbridled consumerism and unmindful living as the cause, he said that a practical way to the save the planet is to encourage collective practice by the young.

“One Buddha is not enough. We need many Buddhas,” he reasoned.

He said that now the onus of the younger generation is to become “activists of the 5 mindfulness training”.

It is through deep listening and compassion within that parliaments, corporations, classrooms and families can be transformed into mindful Sanghas. And it is by these transformations thereby lies the hope of salvation for this planet.

The World Buddhist Conference 2010 is being held in the Malaysian capital from Sept 25-26, 2010. Nine speakers including Ven Thich Nhat Hahn have been invited to share their experiences and wisdom on the theme “Living in Harmony, When Things Fall Apart”.