How and why this Buddhist celebrates Christmas

Guelph, Ontario (Canada) -- I’ve been a practising Buddhist for almost 30 years now, and I often get asked if I celebrate Christmas. I do. I love Christmas. 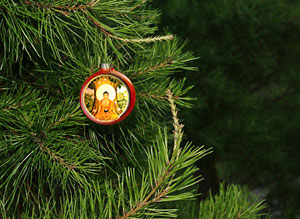 I just don’t celebrate it the same way a devout Christian would. I was raised Christian, and there are some traditions I just won’t give up and Christmas is one of them. So how does a previous Christian and now Buddhist celebrate Christmas? First of all, let me get some things straight. Buddhism is not a religion that believes in a God. Buddha is not regarded as a God or a deity. Buddha was a human being, so there is no theistic God belief in Buddhism. Which means that I am an atheist as well as a Buddhist.

So, how do I reconcile Christmas which celebrates the birth of the son of God? Dec. 25th was chosen as the birth date of Christ because it is near the winter solstice and the church wanted to stop those darn pagans from celebrating the rebirth of the sun, so it changed it to celebrate the birth of the son. It was unsuccessful at wiping out all the pagan traditions such as Christmas trees and the various incarnations of Santa Claus, although it tried pretty hard with the inquisitions and witch burnings. But the traditions around the winter solstice prevailed. It is these traditions that I am most attached to and I’ve also created my own traditions.

Every Christmas Eve I cuddle up with my children and watch A Christmas Carol: the original, with Alastair Sim. I have never liked any of the remakes. They just don’t measure up to Alastair Sim’s incredible performance as Scrooge. We can now pretty much quote the movie word for word. But nothing puts me in the Christmas spirit more than this movie. It’s a story about human transformation. It is the scene where Jacob Marley’s ghost appears before Scrooge that affects me the most.

There he is, with his long chain of bad causes which he has forged in life. He says “I made it link by link and yard by yard; I girded it of my own free will, and of my own free will I wore it,” and he warns Scrooge that his chain is longer. Scrooge replies that they were only being good men of business, Marley passionately screams: “Mankind was my business. Their common welfare was my business; charity, mercy, forbearance, and benevolence, were all my business.” He then points Scrooge in the direction of the window where there are a number of spirits with huge chains similar to Marley’s surrounding a homeless women and her baby on the street below. They are screaming and moaning and Scrooge asks why they lament. Marley replies they lament because they have lost the power to do anything; now that they are merely spirits. When I was a child this scene horrified me, now as a Buddhist it has significant meaning.

We all forge chains of causation good and bad. What matters is what we do while we are living. Whatever belief system one may have, I think we can agree it is our behaviour as humans that is the most important thing. Scrooge’s transformation as he realizes he can change is a scene of a man full of joy. He actually says he doesn’t deserve to be this happy. Realizing he can now work to do good transforms his life.

Christmas is one of those holidays that embodies this potential and acts as a reminder for me, that there is hope for the world. Some of us may not need to be reminded of this, and many of us struggle to feel hopeful. But if we can hang on to that feeling and do just one good thing the chain reaction is tremendous. We can forge a chain of hope, and humanity will become the life tendency of society.

I will always celebrate Christmas or solstice even though I’m not a Christian. It brings out the best in people, and for me as a Buddhist, is reason to celebrate.