Washington, D.C. (USA) -- A crowd of thousands gathered Saturday morning on the West Lawn of the U.S. Capitol to hear the Dalai Lama give a talk on the importance of compassion, wholeheartedness and the ability to overcome physical struggles using mental focus. 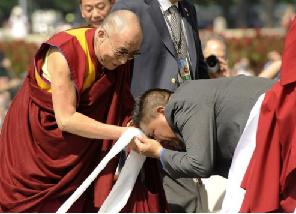 The talk was the Tibetan leader’s largest event since the start of his 10-day trip to lead the 2011 Kalachakra for World Peace, a Buddhist ritual taking place in the District through July 16.

Since his arrival, he has been praying at the Kalachakra’s headquarters, Verizon Center, in preparation for the final events. He has also been delivering speeches with other peace advocates and meeting with political figures.

For some who wanted to see the Dalai Lama free of charge, Saturday morning was their chance.

Christine Senteno of the District had heard about the Kalachakra but “didn’t know enough about the culture” to participate in the ritual itself, which is why the talk on Saturday was a welcome opportunity for and her friend Andrea Alston-Smith of Alexandria.

Alston-Smith, who said she has wanted to see the Dalai Lama for years, secured a spot near the stage for herself and Senteno hours before the talk started.

That was precisely the impression the Buddhist leader was trying to convey.

“Usually this is my style, always completely informal,” he said to the crowd as he sat in a cushioned chair on stage and under an umbrella to block out the bright morning sun.

He shared stories of meetings with scientists and political figures and even one about his gallbladder surgery a few years ago. His talk was punctuated with the occasional joke and hearty laugh, which the crowd echoed with more laughter.

He also called on younger generations to shape the 21st century into a “century of dialogue” by having a “calm mind” and “compassionate heart.”

Everybody wants a “happy life,” he said. “ These goals entirely depend on our inner peace.”

Although the lawn was packed, Ani Thuvten Dronma, a Buddhist nun from Santa Rosa, Calif., said she felt that the Tibetan leader was having an intimate conversation with every single onlooker.

“I have no idea how many people were here, but the experience was you were sitting down next to him and he was talking with you, just talking with you like a friend,” she said. “I was really impressed with his ability to connect with people.”

The expansive lawn, with the view of the Capitol in the background, is a familiar venue for the Tibetan leader. He gave an open speech there in 2007 when President George W. Bush presented him with the Congressional Gold Medal.

At the time, the Dalai Lama held the roles both of religious leader and leader of the Tibetan government in exile.

In the wake of the Chinese invasion of Tibet in 1950 and the flight of thousands of Tibetans to exile in India, the Dalai Lama has advocated peaceful negotiations to grant Tibet autonomy within China. Such concerns were at the core of his speech four years ago.

But since stepping down in March as leader of the Tibetan government in exile, the Dalai Lama has focused on his role as a spiritual leader. He explained his reasoning in a speech Wednesday, calling his previous straddling of church and state a “hypocrisy.”

“Now I can tell people religious institutions and political institutions must be separate. My statement is now honest,” he said Wednesday.

Lisa Smith, a Buddhist from Richmond, said the Dalai Lama’s talk Saturday had the potential to resonate with people of all faiths and backgrounds.

“There are many people who don’t know a lot about the principles of Buddhism,” she said. “And to come and connect with those beings, hopefully that would occur.”