Monk Sees US Pagoda as Central to Cambodian Community

Washington, D.C, USA -- “Very often in summer, many American students come to the Buddhikaram temple to learn about Buddhism and Khmer culture.” 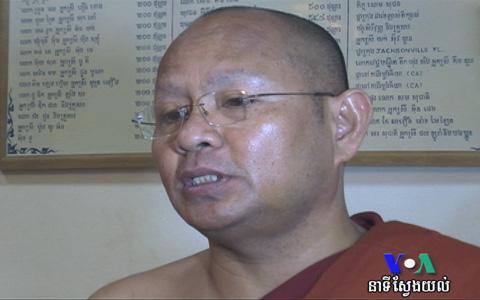 Venerable Chan Horn, chief of monk at the Buddhikaram pagoda in Silver Spring, Maryland, told “Hello VOA” recently that he believes pagodas are still at the heart of Cambodian-American communities.

They not only provide a place of worship, he said, but they serve humanitarian causes for local and Cambodian communities. They also preserve some of Cambodia’s culture, he said.

The Buddhikaram temple is one of the largest Cambodian Buddhist temples in the US. It’s 33rd anniversary will be held in August. It was built in Silver Spring, Md., in 1986, to serve Cambodians who had fled to the East Coast of the US. Chan Horn has served as its head since 1997.

“Very often in summer, many American students come to the Buddhikaram temple to learn about Buddhism and Khmer culture,” he said. Main Buddhist scriptures have been translated into English, he said.

The temple also offers classes in Khmer language, culture and customs to Cambodian children raised in the US, he said. It is also a place where would-be US citizens can study for their citizenship exams. It serves as a job board for people seeking employment, and links citizens to government, he said.

“The temple provides humanitarian assistance for those who have no place to stay,” he said. “They can stay at the temple temporarily. It has also held fundraising to help Cambodia on a few occasions. Vaccination has also been offered to community members at the temple free of charge.”

“In addition to abstaining from taking life, we should have compassion,” he said. “Naturally, the taking of a life is a serious mistake. Buddha said that killing others shortens our lives, but not killing provides longevity and comfort to us, as well as our families, communities, societies, and countries.”

“If you can abstain from [stealing], your belongings will never be taken,” he continued. “Also, you will have compassion toward those who have less advantage, and rescue them from starvation.”

The third precept, against sexual misconduct, means no adultery, he said, and it means being honest with one’s spouse. If this precept is violated, one will be reborn in hell or become a hermaphrodite.

Lying, meanwhile, means “one will be reborn with a bad mouth, bad teeth, and smelly breath,” he said.

The fifth precept, abstinence from drinking, prevents heedlessness, he said. It also keeps desires tempered. “If one violates the fifth precept, in the next life one will be stupid or become a maniac or silly person,” he said.

“However, our leaders have allowed gambling, the sale of alcoholic drinks and even brothels,” Sarith said. “My question is whether these leaders, who permit businesses that violate religious practices, will go to hell? If they do, what level?”

Sins committed by anyone, leader or common people, will be repaid in kind, he said.

“If you are drunk, you may run into a car on the street,” he said. “If you commit adultery, you may be beaten by your spouse.”

Bribery and corruption are also prohibited, he said.

Listener Pich Makara asked via Facebook whether monks have a right to engage in politics or to stop human rights abuses as they occur.

“If a monk explains things based on reasonable facts, based an dharma, and is not on any side, and does things for justice and social good, he has not violated the rules of Buddhism,” Chan Horn said.