Princeton, New Jersey (USA) -- Exiled activist and Buddhist master U Pyinya Zawta and two of his companions led meditation and Q-and-A sessions on Tuesday as part of a three-part program to commemorate the fourth anniversary of the 2007 Saffron Revolution in Burma. 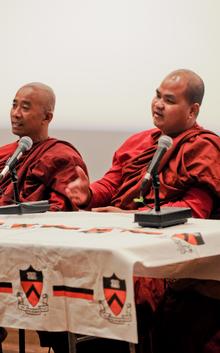 << Photo by Ananda Zhu
Burmese monks host a discussion in McCormick 101 on Tuesday.

All three monks are active in the All Burma Monks’ Alliance and participated in the 2007 Saffron Revolution, an anti-government protest led by Burmese monks.

The event, which was sponsored by the Princeton Buddhist Students’ Group, started with a meditation session.

“We thought meditation was important because it’s what we do, and it’s a huge part of their lives,” event co-organizer Cristina Stanojevich ’12 said.

Co-organizer Gabriel Greenwood ’12 also noted that the meditation fit well with other parts of the program, which focused on raising awareness about Burma’s political situation.

“To them, meditation and political activism are part of the same spirit,” Greenwood said.

Over two dozen students participated in the meditation, including many students who had meditated in the past.

“It was like other meditation sessions but shorter and very relaxing,” Rebecca Smaha ’14 said, adding that she is active in the Princeton Buddhist Students Group.

The second part of the program consisted of a showing of the controversial documentary “Burma VJ: Reporting from a Closed Country.” The documentary includes prominent appearances by U Gawsita, one of the monks who attended the event.

The film emphasized the brutal reality of the Saffron Revolution, during which monks who decided to take a peaceful stand against the military regime faced violence and long jail sentences.

Immediately following the screening, audience members had a chance to ask the monks questions about their views and experiences. A noticeable theme in the monks’ answers was that the situation has not yet improved in Burma in the aftermath of the revolution.

“We haven’t seen the real change yet,” U Zawta said through a translator. “We say that because there are still political prisoners and they also have fighting between the military leaders and the ethnic groups that are at the border.”

Of the over 200 monks originally imprisoned, only 40 to 45 have been released because their prison time was fulfilled. The remaining monks face at least five to six more years of jail time.

When asked about the relationship between the monks and the Burmese people, U Zawta stated that monks serve as the moral authority in Burma but lack political authority.

“Monks always have close contact with the people because most of the people are Buddhist and [the monks] know how the people have been suffering from the government,” U Zawta said.

“I just heard about it and I was interested to see the monks,” local resident Allison Cryon said. “I thought it was especially valuable to hear authentic information.”