Except for the statues of Buddha at the entrance, the Boston Buddha Vararam Wat in Bedford looks more like a New England home than a religious temple with its roots in Thailand.

Medford, MA (USA) -- The three arches in front are due for some adornment, said Rojana Laplume, a temple member; that is on the “to-do’’ list, along with finishing work on the monks’ living quarters upstairs. 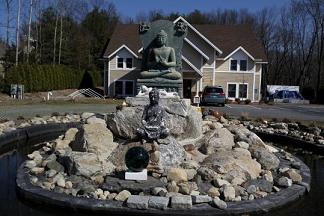 To help with such work, as well as upkeep costs, the small community of Buddhists, predominantly from Thailand, Laos, and Cambodia, is reaching out to a wider audience, with its first fund-raising dinner and concert set for 6 to 10:30 p.m. April 8 at Springstep in Medford.

Even with some decorative detail, the exterior, with its clapboard siding and white trim, will still undoubtedly blend into the suburban residential landscape on North Road in Bedford. But stepping inside transports visitors to another land. A large golden Buddha is surrounded by flowers and smaller statues; announcements in curly Thai script are posted around the entrance; and the abbot, or head monk, wearing a simple saffron robe, receives visitors warmly and offers blessings.

“I’ve been here a long time, I guess, but I always come here to say my prayers,’’ said Laplume, who commutes from New Hampshire.

She came to this country from Thailand in 1971, and later married a Canadian, but likes to keep the connection to her homeland.

“It’s your roots,’’ she said. “You don’t forget where you actually came from.’’

The temple relocated to Bedford from Malden in 1998, and took up residence in a house that was torn down in 2008 to make room for the new temple, which opened in 2009.

The community is fairly small. Between 30 and 50 people visit the temple on Sundays; holidays draw 200 to 300 people, Laplume said. People come from all over New England and even New York to celebrate, pray, receive blessings, and make offerings.

Money is tight in part because, unlike some temples, the Boston Buddha Vararam Temple does not charge a joining fee, said Laplume. So, donations have to cover about $14,000 a month in expenses.

The community includes those who do not identify as Buddhist. The temple offers meditation classes, lessons in traditional Thai music and dance, and a Thai language school, which has about 50 students, both adults and children.

Buddhism in Greater Boston has grown over the last two or three decades, according to Diana Eck, a professor of comparative religion at Harvard. The growth has come not only from immigration but also from Euro-Americans and African-Americans who have embraced Buddhism, she said, often through an interest in meditation.

It’s not unusual for temples to struggle with funding, said Eck. In the Thai tradition, the temple members support the monks, who do no work for money. Still, temples in Greater Boston that she has followed have become more established over the last couple of decades.

“All of them have done pretty well when you consider the fact that they are all basically from the ground up,’’ said Eck.

There are several distinct Buddhist communities in Boston, generally based on the country of origin, which have some differences in the way they practice, said Eck. But unlike some other metropolitan areas, Boston doesn’t have a unified Buddhist community, where Buddhists from other temples would necessarily support the Bedford temple.

“There isn’t really that kind of pan-Buddhist identification,’’ she said.

Temple members hope the fund-raiser will change that a bit, increasing membership but also expanding outreach to the wider public, who may be interested in learning about Thai culture or Buddhist meditation.

“This will be the start event, and we will try to gather more people to be long-term donors for our temple,’’ said Duangpon Pongphasuk, a classically trained singer who studied at the New England Conservatory and is performing at the fund-raiser.

She said the temple is important for people from Thailand to hold onto their culture here, but she also hopes people with no ties to Thailand or Buddhism will attend the fund-raiser to learn about another culture.

“It’s not only for Thai people,’’ she said of the event. “And meditation is not only for Buddhists. It’s for everyone who wants to . . . relax and to learn,’’ she said. “We fight a lot in this world. We need peace.’’

Tickets to the April 8 fund-raiser are $100. For more information, go to www.siamsmileevent.weebly.com.