Buddhist gives all for monks ritual

NEW YORK, USA -- Dayangji Sherpa lives with her 25-year-old daughter, Nima, in a one-bedroom apartment in Queens, where they sleep in the same bed to save money. But Sunday, they stood on a dais before an altar of glittering gold Buddhas while some of the highest-ranked Buddhist monks from the region bowed their heads to the women and showered them with benedictions. 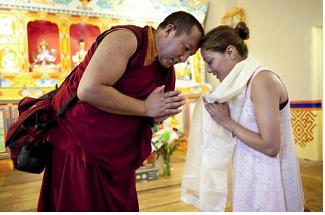 << Nima Sherpa, right, bows with Buddhist monk Sangay Tenzin after a ceremonial reading of the Kangyur, the Tibetan language version of the sacred Buddhists texts, in a monastery in New York, last week. (BRIAN HARKIN / The New York Times)

It was the culmination of a rare ceremony where every single text of their Buddhist canon is read from morning until night by monks, who are fed, housed and paid by a sponsor until all 108 books are read.

Completing the Kangyur, the Tibetan-language version of the sacred Buddhist texts, is done as a form of prayer for peace for all sentient beings, several monks explained. For nearly 40 days, ending last week, about a dozen monks called from around the region read eight hours a day, aloud and simultaneously, seated cross-legged in a converted brick church.

There had never been such a reading in New York, according to Urgen Sherpa, 41, a former general secretary of Sherpa Kyidug, which represents Sherpas in the United States, including an estimated 2,000 to 2,500 in New York. (Urgen Sherpa is not related to Dayangji Sherpa. Many Sherpas, who are an ethnic group from high in the Himalayas in eastern Nepal, use the surname.) Kangyur readings are rarely commissioned even in Nepal, Urgen Sherpa said, because of the cost.

Dayangji Sherpa, 54, a home health aide, estimates she paid about $111 per monk per day. It included twice-daily meals of Nepalese and Tibetan comfort food at a restaurant and an attendant to provide an endless supply of traditional salted butter tea. Other members of the community also made donations.

In a fur hat, her long braid laced with pink thread, Dayangji Sherpa doled out envelopes of money to each monk Sunday, her daughter following behind her. As trumpets sounded and cymbals clashed, she limped across the dais on her artificial leg: When she was eight, her leg was amputated after it was crushed by an avalanche while she tended yaks near Kunde, her village. At 22, her family disowned her when she eloped with a man from a lower caste. When she was five months pregnant with Nima, the couple split up; Dayangji Sherpa raised her daughter alone, eventually moving to the United States about a decade ago.

Even in a religion that rejects materialism, her modest means made the ceremony noteworthy, said Sherry Ortner, an anthropology professor at the University of California Los Angeles and an author on Sherpa culture.

Dayangji Sherpa’s father and grandfather, who owned a successful teahouse near the Mount Everest base camp, each sponsored such a reading in the past. Ortner said that in Tibet and Nepal, such events are typically paid for by the wealthy. That a person of lesser means is sponsoring the Kangyur in the United States suggests that in the diaspora those old hierarchies are shifting.

“The status system is changed,” she said.

Spending her savings was an act of faith, said Urgen Sherpa of the community association. Buddhism rejects materialism as one of the Three Poisons that lead to suffering.

“She is giving away some materials,” he said. “That means a destroying of one of the poisons: greed, attachment.”

Pema Sherpa, a nanny, makes $700 a week and has supported one of the monks for the past two years and will continue to do so indefinitely, providing him a room in her house and $600 a month.

She explained Dayangji Sherpa’s generosity: “What do you need in life? You have food, shelter, what else do you want? This is karma.”

As the final ceremony wrapped up, Nima wearily removed her hat. She had quit her job at a bus company to tend to the monks, brewing vats of butter tea in the basement and even cleaning the toilets. Her devotion was to her mother as much as the faith, she said, explaining that her Nepalese peers felt similar commitment to their parents: “We feel like we owe them our life, because they’ve done so much for us in our life.”

After nearly 40 days bound to the monks, the moment was bittersweet, she said. Not that there was time for nostalgia.

“First thing I’m going to do tomorrow,” she said, standing in her floor-length traditional gown, “is wake up and look for a job.”