Buddhist Meditation Center is an oasis of peace next to former Temple Mt. Ski Area

Hudson, NH (USA) -- Meditation is peaceful and inwardly focused, but occasionally it requires a lot of noise and outward effort, such as when you’re bringing a 4-ton statue of Buddha from Vietnam to the edge of Peterborough. 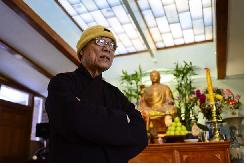 << Staff photo by William Wrobel
Kien Tan stands in the meditation temple at Temple Mountain Buddhist Meditation Center in Peterborough, NH where he and other monks meditate three times a day and hold classes for local residents every Saturday.

“This was very difficult to get here,” said Kien Tan, one of two monks in residence at the Temple Mountain Buddhist Meditation Center, on Route 101, as he gazed at the huge seated Buddha. It greets you as you drive up to the house just west of what was once Temple Mountain Ski Area.

This Buddha is one of a number of statues placed along mediation pathways that wind through several acres of the property, depicting Buddha in several stages of his life as well as other figures important in his story. Along with a beautiful, 1-ton gong hanging in a pagoda, and touches of lighting and stonework near a small pond, they help create a space that is unique in the region, where people come each Saturday to learn how to meditate from two monks who have spent their lives at the practice.

The center was founded by Tue Man, 35, who lives at the center with Kien Tan, 75, both of whom originally came from near Ho Chi Minh City in southern Vietnam. It follows the teaching of Vietnamese monk Thien Thanh Tu. (Note: The Telegraph’s typography cannot reproduce some punctuation marks used in Vietnamese names.)

The meditation center, which is registered as a nonprofit with the state, has been operating for about three years in a small, one-story house adjacent to what is now the Temple Mountain State Reservation, opposite Miller State Park and Pack Monadnock.

Many people became aware of it only last year when a large, ornate gate was built at the bottom of the driveway, visible to passing cars on Route 101.

When it received permission to operate as a “church/meditation center” from the Peterborough Planning Board in June 2011, the only stipulation was that it could not host overnight retreats.

The center was founded by about 10 Vietnamese families throughout the Boston area and New Hampshire, said Kien Tan, who, like Tue Man, speaks heavily accented and halting English. They came to New Hampshire to be on a mountain and yet still close to Boston, they said. The nearest similar temple is in Braintree, Mass.

The 11-acre property includes a small, one-story house at the end of a steep, 100-yard-long driveway. The house has not been altered from its domestic function except for the former living room, which has been turned into an open meditation center. A ceiling skylight illuminates a large sitting Buddha on an altar, surrounded by fruit and flowers, while the floor is lined with rugs.

The house is surrounded by trees and offers a beautiful view to the west, toward Peterborough and Mount Monadnock. The property is full of winding paths that have been painstakingly created over the years, often with flat stepping-stones that lead to statuary or small grottos.

In winter, after trees have lost their leaves, some traffic noise can be heard from Route 101, but otherwise it is still and quiet – except for when the occasional snowmobiler comes through.

“It can make my mind awaken, (so) we have to know what we are,” Kien Tan said.

“You can know what is going on inside yourself,” Tue Man said.

Meditation is surprisingly difficult, they say. One of the draws of the center is the guidance that the monks can provide to a loose class that gathers Saturday afternoons.

“In a group it is easier – on your own self, it is not so easy,” Kien Tan said. “We have practiced. We can meditate anywhere and anytime.”

To help others approach this state, the center opens at 2 p.m. Saturdays. The men say various numbers of people show up from week to week for the free sessions, including a few regulars. Practitioners sit on floor rugs, in full-lotus or half-lotus position, or just kneeling if their joints aren’t up to it, for meditation and chanting.

Kien Tan says he came to the U.S. among the “boat people” who fled the Communist takeover at the end of the Vietnam War and has been associated with several Buddhist monasteries on the West Coast, the Southeast and most recently Michigan, before coming to New Hampshire to be part of the Temple Mountain Meditation Center.

Tue Man comes from the same area, although it was known as Ho Chi Minh City by the time he grew up.

“You prepare your mind with a vision of the Buddha,” he said of the work they do. “Those who come to learn, we can help them.”