A towering tribute in Raynham

Construction on the 110,000-square-foot NMR Meditation Center continues in Raynham. The building is scheduled to open next June.

Boston, MA (USA) -- Is the head monk at a Raynham meditation center looking forward to the monks' new digs, which will be part of the largest Thai Buddhist temple outside of Thailand? 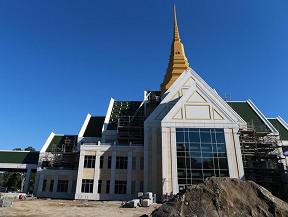 << Raynham facility to be largest Thai Buddhist temple outside Thailand

The building is only external, he explained, and so are the monks. With its tiered gables and golden spire reaching high above the homes below, the temple under construction on South Street East is the external monastery, not the internal monastery of the mind, said Phrakhruwinaithorn Mongkol Kuakool.

But without the external, the Thai Buddhist community could not host conferences for hundreds of people or house a museum dedicated to the king of Thailand, both of which it hopes to do in the 110,000-square-foot building scheduled to open next June.

The new facility is expected to expand the number of visitors to the site, although the existing modest building already sees hundreds each year.

One of those visitors thrust the monks' home into the spotlight when news emerged last week that Aaron Alexis, who police say killed a dozen people in the Washington Navy Yard this month, had stopped on Aug. 13 at the farmhouse next to the new building.

Alexis asked to spend the night at the farmhouse, telling a monk he didn't want to stay at a hotel because noises bothered him, said Eang Tan, a member of the temple's construction committee.

The monk would not allow him to stay at the farmhouse, where only monks are permitted to spend the night. But he let Alexis sleep nearby in a former school the temple is renting from the town.

At the time, construction of the new temple was well underway.

Now, the exterior is nearly finished, its walls of Jerusalem limestone echoing the saffron color of the monks' robes, architect Been Wang said. The steeple-like chedi has been built of brass panels and painted gold. The green roof tiles have been affixed. The terrace railings stand waiting for their illuminated corner finials, which will be sent from Thailand.

But like a mind seeking enlightenment, the interior has a way to go. Earlier this month, bare metal studs still delineated most rooms, although walls had been installed in the monks' dining quarters in the basement. The seven resident monks are tentatively scheduled to move in this weekend, depending on how construction progresses, Tan said.

Long after the monks make their move, work will continue on the communal rooms and halls. Some spaces will be lined with marble. Light fixtures will hang from gold medallions. The main room will have a Buddha statue on a five-foot marble platform, and another Buddha will grace the multipurpose room. During a walk-through this month, a larger-than-life gold Buddha was visible through the side of a wooden shipping crate.

Before the finishing work begins, American contractors working for Milford-based Consigli Construction Co. will hang up their hats, and artisans will travel from Thailand to install the interiors, including stairway railings handcrafted in their home country.

When the building is complete, it will have bountiful amenities: A traditional main temple room, meditation room, museum-library combination, multipurpose room with glass doors facing a stone courtyard, a commercial kitchen, a special room for the queen of Thailand, monks' quarters, visitors' quarters, a grand staircase, and gift shops.

Called Wat Nawamintararachutis, or the NMR Meditation Center, the facility is almost like a small college "“ an institution that generations of people can enjoy, Wang said.

Its primary purpose, he said, is to honor the king of Thailand, Bhumibol Adulyadej, who was born in Cambridge in 1927 and has been king since 1946. It will be the largest Thai Buddhist temple, or wat, outside Thailand, he said.

The king is revered in Thailand for his long life of service and modest manner, according to a BBC News profile that called him "as much a spiritual leader as a worldly one."

Although taking the true measure of his national reputation can be difficult, because Thai law forbids insulting a monarch "” offenders can be jailed for up to 15 years "” the king received the United Nations' first Human Development Lifetime Achievement Award in 2006 for what the UN called his "tireless 60-year-long efforts to help the poorest and most vulnerable."

While the large Raynham temple is new, the temple community has been active since the monks moved to the farmhouse in 2006.

On weekends, as many as 80 followers gather, and the center hosts up to 500 from around New England for special events, such as the Thai New Year. About 80 percent are Thai; most of the rest are people of Cambodian-, Chinese-, European-, Indian-, and Laotian-American descent, Tan said.

The temple community adheres to the Theravada branch of Buddhism, the one followed by the overwhelming majority of Thais. It is sometimes described as the southern branch of Buddhism and is followed in great numbers in Cambodia, Laos, Myanmar, and Sri Lanka.

Diana Eck, director of the Pluralism Project at Harvard University, said ethnic communities at Buddhist temples in the United States remain largely separated, often because of language differences, and because part of their mission is to preserve the culture of the founding group. But temples with a strong focus on meditation tend to attract more people across cultural lines, she said.

The man behind the construction project is a well-known Thai Buddhist abbot, Phra Promwachirayan, who has helped develop wats in the United States. With the abbot leading the project, it received a $16 million commitment from the Thai government, Tan said. The rest of the $60 million cost will be paid by private donations from the abbot's followers around the world, he said.

The abbot chose Raynham, which is about 40 miles from Cambridge, because it offered a big piece of land "“ some 55 acres "“ near Route 24, Tan said.

Wang said the abbot selected him as the architect after seeing the building Wang designed for Genzyme in Allston. Wang, a Buddhist, came to the United States from Taiwan in 1974 to attend Harvard graduate school, then joined Architectural Resources Cambridge, where he is now a principal.

Wang said many people worked on the project, and he feels honored by what he called a once-in-a-lifetime opportunity to be part of "a project for the people."

He went over the first "napkin sketches"  with the abbot eight years ago, he said. Gables are common to both Thai and New England architecture, so they feature prominently in the design, stepping down in tiers from the central chedi.

The abbot has also purchased about 30 acres next door, to the south, Wang said. His plans for the land are not known.

Despite the temple's size, Raynham Town Administrator Randall Buckner said he has seen no significant opposition to its construction on a residential street.

Grace Castle, an 86-year-old neighbor who lives a few houses away, said she has no ill feelings toward the temple, though she never expected something so large to come to the neighborhood when she and her son built a home 12 years ago.

"Whatever comes, comes. There's nothing much we can do,"  she said. "It's just changing the entire neighborhood."

The temple has offered space to the town for meetings, Buckner said, and Wang, too, emphasized that it will welcome the local community.

"This is not a secret. You have to be open to mainstream America,"  he said.