Raynham, Massachusetts (USA) -- The Thai Buddhist monks in their saffron robes have moved from the unassuming little farmhouse that has been their home since 2006 into the completed portion of the white-and-gold temple that has risen high above the houses in this tree-lined neighborhood. 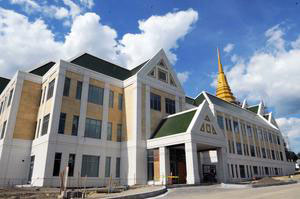 “Many, many people have come to visit to learn the Thai language, Thai dance and Thai music,” said the Ven. Mongkol Kuakool, head monk at Wat Nawamintararachutis, also known as the NMR Meditation Center, at 382 South Street East.

And a steady stream of neighbors has stopped by to get a peek inside the structure, which will be the largest Thai Buddhist temple outside of Bangkok and sits in sharp contrast to the yellow clapboard house and the animal hospital that flank it.

“I’ve been watching it be built. It’s so spectacular,” Mattson said. It was their first time inside and they received a warm welcome when they knocked on the door of the one small section currently being occupied on what is still a construction site filled with workers in hard hats.

The monks moved into the new temple in late September and the farmhouse that had been their home near the front right side of the property has since been demolished.

In all, seven monks and three visiting teachers call the new temple home. They have set up a small prayer room with Buddha statues in a case, tiny compared to the giant bronze Buddha that will be the centerpiece of the temple’s third floor. The monks and their guests leave their shoes at the door, walking around the linoleum and carpeted floors barefoot.

Hart said her friend has been emailing her photos updating her on the construction project.

When she visited last winter, she took a walk one night and suddenly came upon it.

“When I came to the end of the street, it was uplit in the snow. It was so beautiful, I thought I was having a vision,” Hart said.

On their visit, the head monk happened to be on the ground floor and gave them an impromptu lesson on Buddhism sitting around a modest dining table.

Mattson, who works in human resources and has taken up meditation in the past couple years, said it was more than she could have hoped for.

“Medicine heals your body and meditation heals your mind and spirit,” the head monk said.

Richard Cook, a retired engineer from Hingham who volunteered to work on the permitting process on behalf of the temple, said the grand opening will likely be in June.

“There is a lot of site work to do, but for all practical purposes, the exterior work is done. The major portion of the work to be completed is the interior,” said Cook, whose wife is a member of the temple.