HANOVER, PA (USA) -- It's a cold and dark Monday night on the Gettysburg College campus, but a classroom on the third floor of Breidenbaugh Hall is warm and full of soft light. 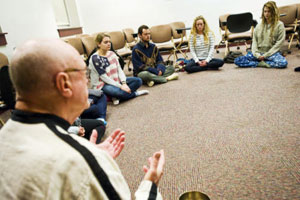 The only sound is the whir of the building's central air.

The students are part of an on campus group that comes together weekly during the semester to meditate, the Gettysburg Buddhist Sangha. "Sangha" originated as a Sanskrit word and means a Buddhist monastic order or community.

A Los Angeles transplant with decades under his belt in Central Pennsylvania, Mulligan is an elder statesman of sorts to the younger generation assembled in front of him.
A student sits in the lotus position on a zafu, a traditional meditation cushion, during the Gettysburg Buddhist Sangha's meditation session Monday night. (Clare Becker — The Evening Sun)

He's someone who can easily combine Buddhist teachings in a Southern California vernacular style -- Let go of any road dust from the week -- with what appears to be a genuine caring for the students' wellbeing -- How is everyone doing? Is today the last day to drop with a Withdrawal?

Mulligan reminded the group it's fruitless to try to push the mind's thoughts away. Instead, he suggested, students should training the mind to be in the moment and to let thoughts come one at a time.

"Look, we have suffering," Mulligan said. "Life is unsatisfactory."

One of the appeals of meditation for young people is the sense of clarity it can bring at a time when they need it the most, he said.

"They're on their own for the first time, away from home, searching for some meaning in their lives," Mulligan said.

The clarity might also be the key to the longevity of the group, which has been around in one form or another for about 15 years, Mulligan guessed.

Aidan Caravana, a senior and the club's student president, said the process helps him refresh after a crazy week of studying. The chemistry major became interested in meditation while studying abroad in Nepal his junior year. Now he's hooked.

"It clears your mind from the craziness that goes on every week," Caravana said.
Meditation meetings

The Gettysburg Buddhist Sangha, led by Buddhist practitioner and teacher John Mulligan, is open to students and meets Mondays from 8:15 to 9:15 p.m. in Room 311, Breidenbaugh Hall on the Gettysburg College campus.

Mulligan also leads a community meditation on Sundays. The Insight Meditation Community of Gettysburg is open to the public and meets from 6:30 to 8 p.m. at 136 S. Stratton St.