Poolesville, MD (USA) -- For 29 years, members of the Kunzang Palyul Choling Buddhist Temple in Poolesville have kept a prayer vigil around the clock in their 24-hour prayer room. 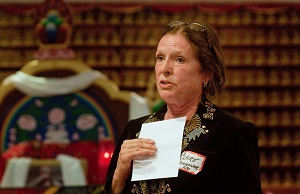 On Tuesday, the group celebrated the completion of renovations to the room and thanked all who supported the temple through the process. Though there was much relief to have the room fully functional again, the renovations were just the first step in a long process of renovations that the old farmhouse-turned-temple requires to meet county building codes.

County Executive Isiah Leggett came to the celebration and community appreciation event. He discussed how the temple’s mission, to eliminate suffering in all forms, is an important message that reverberates throughout the many different communities in the county.

Through the six-month renovation the prayer vigil continued, though only one or two people were allowed in the room at one time because the building was not up to code. The renovations included adding bathrooms, making the room accessible to those with disabilities and adding handicap parking, and updating fire prevention elements.

The prayer room is now reopen to the public 24 hours a day, but the rest of the temple is still only accessible to those living there and their guests. Six monks and nuns live in the temple, including the community leader, Jetsunma Ahkon Lhamo.

Throughout the winter, the community held their gatherings outside in the cold to abide by county restrictions. According to temple President Claire Waggoner, about 100 people regularly participate in temple gatherings and worship there.

The temple follows the Tibetan Buddhist tradition. It runs programs for animal rescue and prison outreach and feeds those in need. The temple grounds also include a 63-acre wildlife sanctuary and a wastewater treatment system.

Ani Dolma Johanison is one of the primary members of the community who maintains the wildlife sanctuary and monuments within it. Ani means “nun.” Johanison, dressed in gold and red robes for the ceremony Tuesday, has taken over 200 monastic vows and dedicates much of her time to meditating and supporting the temple community. The five main principles from which the vows derive are no killing, lying, stealing, intoxication or sex.

“When I got here I knew I was home,” Johnison said. When she and other followers heard that they would not be able to use the building until it was updated, they were devastated.

“You get used to — this is your temple, this is your spiritual home, you can come and go,” Johnison explained. When that access was cut off, she felt cut off from a part of herself.

Through fundraising events and donations, largely from individuals, the group was able to raise $200,000 for the renovations, Waggoner said. For the next phase, she estimates they’ll have to raise $75,000 to $100,000 just to complete building applications and do required studies, before any construction on the rest of the building begins. Waggoner said renovations would include updating the fire suppression system, stormwater management system, flooring and electrical system.

No work can be done until next October, when new zoning regulations on the property go into effect that will allow for construction. The property has more buildings on it than is typically allowed in the area because they were built before current restrictions. The rezoning will allow the buildings remain.

Limited use of the temple has been hard on the community, Waggoner said.

“If you can’t have people come together... it’s hard to keep everybody moving and enthusiast about how they’re doing,” she said.