Voorhees, New Jersey (USA) -- A Cambodian religious order will go before the Voorhees zoning board later this month seeking variances to build a Buddhist temple and community center along a sparse commercial stretch of Haddonfield-Berlin Road. 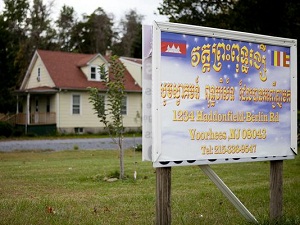 << The Khmer Buddhist Humanitarian Association, a Cambodian religious order, is seeking variances to build a Buddhist temple and community center, as well as a meditation area with four gardens, on this lot at 1234 Berlin Road in Voorhees.(Photo: Douglas Bovitt/Courier-Post )

The Khmer Buddhist Humanitarian Association already has monks living on the site.

The proposal is for a 5,400-square-foot temple and 11,300-square-foot ceremonial accessory building, a meditation area with four gardens and the use of an existing home for the monks who live on the property.

The parcel includes the beginnings of a garden away from the roadway.

A use variance will go before the planning board first.

"Places of worship are not permitted on that site," said Zoning Board Solicitor Stuart Platt.

That the site is along a business district should help the Cambodian order's cause, according to association attorney Robert Baranowski.

"It's on a major road, as opposed to residential neighborhood, so it lends itself well to accommodate the use," he said. "It's not like trying to fit a square peg into a round hole."

The proposal also seeks height variances. They include a request for the temple to be just over 64 feet, 92 feet as measured to the top of the spire.

The proposed community building would be 49.7 feet high, and the entrance gate would exceed 44 feet. In each case, a maximum height of 35 feet is the current standard.

"The size of the structures is a function of their religious belief," Baranowski said of the Khmer Buddhist Humanitarian Association, adding that the proposal's cupola and spire should not be calculated within the height variance.

"We have an agreement that the board will consider the height variance to the top of the roof structure, which is 42 feet, only seven over the limit," he added.

"In the code book, height limitation does not apply to cupolas, domes or anything not for human occupancy."

The gate might be scaled back, Baranowski added, but the setback from the highway still needs to be finalized.

"Since the public needs to have its say, it may need another hearing to complete these variances," Platt noted.

If variances are approved, the order still will need to come in with a site plan, including stormwater management, lighting and landscaping, he added.

"I don't sense any controversy. I hope it stays on that track."

The site is just down the road from a mosque in Voorhees that faced anonymous objections from neighbors when it was proposed 10 years ago.

Voorhees Islamic Center is at the intersection of Lafayette Avenue and Haddonfield-Berlin Road and is currently expanding.

Baranowski said the mosque's location had no bearing on the proposed site of the temple.