Finding peace at a Buddhist retreat

Framingham, Massachusetts (USA) -- \It started under a fig tree on the other side of the world thousands of years ago, but the words and practices of Buddhism have filtered down through the centuries, touching the lives of countless people, finding a growing audience in the United States – and inspiring a new center for worship and meditation in Central Massachusetts. 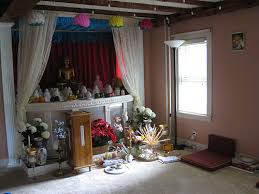 Some three million Americans have now embraced Buddhism and its ancient approach to ending human suffering. Thousands more find themselves attracted to a Buddhist way of life based on love, kindness and meditative practice.

Buddhist teachings stretch way back to the fifth century before the Christian era. The story began in today’s Nepal where Prince Siddartha was born into a royal family and expected to eventually become ruler of the Shakya clan. Shielded from the trials and tribulations of the world for the first 29 years of his life, the privileged prince one day came face to face with the normal reality of human suffering. That personal confrontation with worldly pain and dissatisfaction so upset the young prince that he left the royal life in search of a way to overcome the misery of human suffering.

Six years later, while sitting under a fig tree which is today known as the Bodhi tree or the "tree of enlightenment," Siddartha achieved his goal of transcendence, and he was thereafter known as the Shakyamuni Buddha, the "awakened one."

Happiness can be achieved, taught the Buddha, by cultivating the mind in a variety of ways. It begins with an awareness of Four Noble Truths, which follow a pattern. For life is often filled with suffering, pain and beset with sorrow and trouble. Even at its best, life is never completely fulfilling because people always seek more happiness and less pain. This leads to a craving that itself becomes problematic because people cling to selfish attachments in search of ever more pleasure. Yet, this is also never completely fulfilling. However, while people continue to search for still more pleasure and less pain, Buddhism breaks the circle of human frustration by teaching that it is possible to be completely released from such attachments through the discipline that comes from following a Noble Eightfold Path, which leads to Nirvana and the utter eventual extinction of the pain of existence.

For the next 45 years, the Buddha wandered the northern part of India, teaching freedom from suffering, until he died at the age of 80. Then, after his death, a number of Buddhist schools of thought developed which attracted adherents within the borders of India. In the third century the Emperor Ashoka of the powerful Mauryan dynasty decided to rule his kingdom according to Buddhist principles and sent missionaries to promote Buddhism beyond India.

The mission to Sri Lanka met with particular success. Even today, Buddhism is dominant with 70 percent of Sri Lankans practicing Buddhism. It is also from Sri Lanka the Buddhists came to Framingham and have now moved to Grafton, where they have established the New England Buddhist Vihara and Meditation Center on a wooded estate at 162 Old Upton Road.

On Wednesday evenings, people come to the Meditation Center, where services begin at 7 p.m. Seated on cushions with knees crossed and speaking in English, prayers are offered for personal intentions, for officials, for friends and neighbors, for officials, and even for adversaries. This is followed by some 30 minutes of quiet eastern-style meditation, and finally a question and answer period directed to a monk who has presided over the service.

On Saturday, parents send their children to the Center for Buddhist instruction. The Meditation Center is open to the public and anyone is free to attend Wednesday evening meditation services. There is no charge although attendees often bring a simple offering of food or fruit, which is shared after a service.

While there are many types of Buddhism, some common elements include an understanding of your mind, ethical behavior, meditation, minding the concepts of Karma, and fulfilling your highest potential by breaking free of the cycle of depression.

One central question deals with whether Buddhism is actually a religion or just a way of life. While Buddhism is not primarily a belief system, it comes to grips with the deeper questions of life, such as "Who am I?," "What is the purpose and meaning of life?," "Why do we suffer?," "How can I achieve lasting happiness?," and "What is the role of the individual in achieving emancipation in this life?"

Buddhism affirms and applies basic principles, which can cause you to take a closer look at your expectations, and to accept change gracefully. It calls you to recognize that what’s yours isn’t really yours, and then to attain a lasting sense of true inner peace.

People interested in knowing more about Buddhism are advised to call the Vihara in advance at (508) 839 5038 for counseling, meditation, prayer or blessings. A website is also available at nebvmc.org.