Morris County, USA -- Though the Himalayas are a long way from Morris County, the teachings of His Holiness the 14th Dalai Lama, Tenzin Gyatso, have touched the lives of many people here from all religious backgrounds and walks of life. 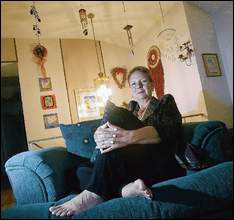 << ANIELLE AUSTEN / DAILY RECORD
Lee Wilschek, who works in the worlds of corporations and interfaith ministry, says the thought from the dharma that helps her most is 'Do no harm through thought, words or deeds.' When the Dalai Lama comes to the region, she is sure to be among those listening to his addresses in person.

To some, he is the ultimate and most visible Buddhist teacher.

Deedee Eisenberg and Lee Wilschek are devotees of the Dalai Lama, and they both plan on being among the 40,000 who flock to see him at Rutgers Stadium in Piscataway Sept. 25.

They spoke on how his teachings have blossomed in their lives.

"There's a group of people called Jewish Buddhists. I began to study Buddhism intensively when I was 19 at the Tibetan Buddhist Learning Center in Washington (Township, Warren County) when the founder, Geshe Wangyal (1902-1983), was alive. Geshe Wangyal had a close relationship with the Dalai Lama and would go to India regularly to meet with him.

"When the learning center has a seminar now, I'll often teach a class involving movement to help balance the hours of sitting people are doing. I love doing that, and I have kept up practicing with one community or another over the years."

• Why she admires the Dalai Lama:

"It's great to hear the teaching of someone who has lived through so much upheaval and faced violence as well as the loss of his homeland and yet has been able to come through with such a message of understanding and compassion and openness.

"His teaching so much is helping us to recognize that as human beings we have this capacity, we have this possibility of cultivating our compassion and living in an ethical way."

• Why the teachings inspire her:

"The Dalai Lama says that war is outmoded, that it's not a practical response, and he's a very practical person. Over the last decade he has been working very closely with a team of scientists in an ongoing symposium with the Mind & Life Institute in Colorado (www.mindandlife.org). They're holding a public forum this November in Washington D.C. for three days, Nov. 8-10. I'm going to attend. It's called 'The Science and Clinical Applications of Meditation.'The Dalai Lama will be present at the whole three-day conference."

"Some years ago there was a conference at the Tibetan Buddhist Learning Center with Jewish leaders in which the Dalai Lama asked the rabbis, male and female, how they managed to keep their spiritual practice over all the centuries of the diaspora. He wanted advice for Tibetans.

"They said they survived by emphasizing the family, celebrating and honoring the family. That was good news for the Dalai Lama to hear."

• Occupation: Executive assistant at a major corporation by day; life coach by night; nondenominational minister on the weekends

"My dad had one of those coffee table books on the great religions of the world when I was growing up, and I remember reading that. The one thing that stuck out about Buddhism for me was that your mind controls your body and therefore your health and well-being. I was reading this at 8 or 9 and going, 'This is really cool!' I don't study. I don't follow. I take what works for me and blend it into my life."

• Why the teachings inspire her:

"The motto on my desk is 'Do no harm through thought, words or deeds.' That's basically how I live and what I learn from the Dalai Lama through his teachings and reading about him. Also, to live in a state of peacefulness. You try not to let certain energies disrupt your life -- anger and revenge.

"Also, when you think about doing no harm to anybody, that means to yourself as well."

"I first saw him years ago at the Tibetan Buddhist Learning Center in Washington (Township, Warren County). We all sat out on the front lawn on a chilly day in October and listened to him speak and it was magical."