Washington DC, USA -- Tens of thousands of people packed downtown Washington yesterday and marched past the White House in the largest show of antiwar sentiment in the nation's capital since the conflict in Iraq began. 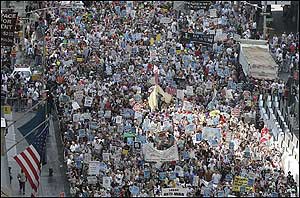 << An estimated crowd of 150,000 converged in Washington DC to protest against the war in Iraq

The demonstration drew grandmothers in wheelchairs and babies in strollers, military veterans in fatigues and protest veterans in tie-dye. It was the first time in a decade that protest groups had a permit to march in front of the executive mansion, and, even though President Bush was not there, the setting seemed to electrify the crowd.

Signs, T-shirts, slogans and speeches outlined the cost of the Iraq conflict in human as well as economic terms. They memorialized dead U.S. troops and Iraqis, and contrasted the price of war with the price of recovery for areas battered by hurricanes Katrina and Rita. Riffs on Vietnam-era protests were plentiful, with messages declaring, "Make Levees, Not War," "I never thought I'd miss Nixon" and "Iraq is Arabic for Vietnam." Many in the crowd had protested in the 1960s; others weren't even born during those tumultuous years.

Protest organizers estimated that 300,000 people participated, triple their original target. D.C. Police Chief Charles H. Ramsey, who walked the march route, said the protesters achieved the goal of 100,000 and probably exceeded it. Asked whether at least 150,000 showed up, the chief said, "That's as good a guess as any.

"It's their protest, not mine. It was peaceful -- that's all I care about," Ramsey said.

The protesters rallied at the Ellipse, then marched through a misty drizzle around the White House and along Pennsylvania Avenue NW. The crowd thinned as events continued into the evening with a concert on the grounds of the Washington Monument that featured Joan Baez and other performers, along with antiwar speeches.

The police presence along the demonstration's route seemed more relaxed than at recent protests, although D.C. police and U.S. Park Police had hundreds of officers in place to deal with potential trouble. Police said a construction fence was torn down and a newspaper box damaged, but they reported no injuries or major problems. They said three people were arrested -- one on a charge of destruction of property, one on a charge of attempted theft and one on a charge of disorderly conduct.

More than 200 counter-demonstrators set up outside the FBI building on Pennsylvania Avenue, and some back-and-forth yelling occurred as the antiwar marchers moved past. "Shame on you! Shame on you!" one counter-protester shouted at the antiwar group. Several dozen officers stood between the two groups, and no trouble erupted, police said.

Some organizations supporting the war in Iraq plan to demonstrate today on the Mall.

Antiwar groups staged smaller rallies yesterday in Los Angeles, San Francisco, Seattle, London, Rome and other cities. In Washington, the events were sponsored by groups including the ANSWER Coalition and United for Peace and Justice and focused on a succinct theme: "End the War in Iraq and Bring the Troops Home Now."

The protest groups helped organize caravans and carpools, and many participants began arriving early in the morning after bumpy, all-night bus rides.

Leslie Darling, 60, came from Cleveland with four friends and said it was her first antiwar protest. She said she was moved by what happened after Hurricane Katrina.

"It made clear that while we spend all this money trying to impose our will on other countries, here at home in our own country, we can't take care of each other," she said.

When the bus coming from Kalamazoo, Mich., pulled up to Freedom Plaza on Pennsylvania Avenue, Sister Maureen Metty, 56, stretched her legs and prepared for a brand-new experience.

"There were 250 sisters who wanted to be here today, but I'm the one they chose to send," she said. She carried a sign that read "Sisters of St. Joseph's for Peace," a folding stool and a backpack with snacks, her toothbrush and toothpaste. She snapped a flurry of pictures for the sisters back home, took a deep breath and headed into the crowd.

People came to the Mall and Ellipse in waves. Organizers said that several thousand never got there because of an Amtrak breakdown on the New York-to-Washington line in the morning. Others who took Metro faced delays because of repairs on the Yellow and Blue lines.

Once protesters arrived, they joined throngs headed toward the rally on the Ellipse, which featured numerous speakers, including the Rev. Jesse L. Jackson, actress Jessica Lange and Cindy Sheehan, the California woman who drew thousands of demonstrators to her 26-day vigil outside Bush's Crawford, Tex., ranch last month and was the inspiration for many protesters yesterday. Her son, Casey, 24, was killed in Iraq last year.

"This is amazing!" Sheehan said. "You're part of history."

Some of the biggest applause went to someone not even on the program. Adam Hathaway, an 8-year-old who became lost while mingling in the crowds. Before he was separated from his mother, Adam was showing people his jar of pennies and proclaiming that "President Bush is taking lots of this and using it in the war."

Several announcements were made seeking help in finding the blond boy from Maine. He was reunited with his mother, Julia Hathaway, as the crowd cheered.

Bush was not around to hear the protesters filing past the White House. He spent the day at command centers in Texas and Colorado, where he assessed Hurricane Rita recovery efforts. Vice President Cheney was undergoing surgery at George Washington University Hospital to treat aneurysms on the back of his knees.

Bush and Cheney were depicted on posters, T-shirts and in makeshift costumes. Several demonstrators wore masks of Bush's likeness and prison jumpsuits. They were often asked to pose for photographs.

Many protesters said they had opposed the action in Iraq all along but were emboldened to demonstrate after polls showed that a majority of Americans disapprove of Bush's handling of the war.

The masses on the street served up a broad cross section of the United States by age, geography religion and ethnic group. The Raging Grannies, Presbyterians for Peace, Portuguese Against Bush and a group of Quakers were there. The Buddhist Peace Delegation took up most of 14th Street NW with its golden banner that read: "May all beings be safe and free from anger, fear, greed, dilution and all ill being."

Protest organizers made special note of military participants in the antiwar effort.

Army 1st Sgt. Frank Cookinham, with a Special Forces patch on one shoulder, scorpion tattoos crawling across the back of his neck and "LOCO" permanently inked on his Adam's apple stands out in most crowds. He was pretty uncomfortable yesterday.

"I've never done this before, but here I am, in uniform, figuring this is the only way I can shove it to Bush," said Cookinham, of Newport, R.I., a Persian Gulf War veteran who recently returned from a second tour in Iraq. "This war makes no sense."

Marching past the Treasury Building, Steven Olsen, 57, and his wife, Brenda, 49, of Yonkers, N.Y., held signs bearing a photo of their son, an Army Reserve sergeant sent to Iraq after enrolling in medical school.

"I hear from him about once a month," said Brenda as her husband gently waved a placard that said, "Proud of my soldier: Ashamed of this war."