Philadelphia, USA -- The silence in an upstairs room at the Friends Center in Philadelphia is so loud on this Saturday every sound seems amplified: the tap of raindrops on a window; a police siren outside; the tick-tock of a grandfather clock. 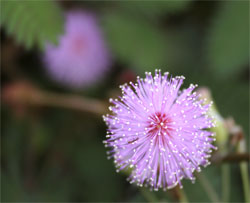 Inside, six members of the Lilac Breeze Sangha meditation group seek internal peace and presence of mind. They sit still. They breathe slowly. They walk in a circle, as if in slow motion.

This is the regular alternate-Saturday meeting of a meditation group started by Quakers and since joined by people from other faiths, or from none at all.

The Lilac Breeze Sangha, which meets for 2 1/2 hours every other Saturday in Philadelphia, is a meditation group that combines theology, practice and philosophy.

The group follows the teachings of Zen monk, author and human-rights activist Thich Nhat Hanh, who was nominated for the Nobel Peace Prize in 1967 by the Rev. Dr. Martin Luther Jr. Hanh advocates using meditation to achieve a state of "mindfulness" - being aware of the present moment in a way that can generate compassion that can transform the world.

"At one point, I was going to three services: a Catholic Mass, a Quaker meeting and then to a Buddhist Sangha," said David Shen of Mount Airy, Pa., a founding member of the meditation group. "I discovered that I was energized. That it made me happy. I thought I would be bored, but I wasn't."

Today, Shen describes himself as mostly Buddhist with a little Quaker and an even smaller amount of Catholic thrown in. He was among an initial group of about five Friends, spearheaded by Lynne Shivers, who started the group in the early 1990s.

The Lilac Breeze Sangha (sangha is Sanskrit for community) has since evolved from a group of Quakers to a collective of people who define themselves as Buddhists, as Quakers, as a combination of traditions, and at least one person who doesn't commit to any tradition.

What they have in common is a commitment to the calming practice of meditation that they say helps to focus their thoughts on the present and stay connected to the people, places and things around them.

Among the group is a former Roman Catholic who found his way to Buddhism after coming out as a gay man, and a former Presbyterian minister, now a Quaker, who left behind a belief in a heavenly Father for a conviction about the godliness in everyone.

Brad Sheeks, a former minister, said the Religious Society of Friends gave him a theology that made sense. "There is a divine energy, a divine presence in each individual person," he said. Sheeks has been a Quaker for 35 years and practicing meditation since he joined the Sangha in the early 1990s.

For construction supervisor Paul Ricker of Roxborough, Pa., the intense solitude of his Buddhist practice and a Quaker tradition that involves human-rights activism in the world community complement each other.

"I look at the different ideas about God as different explanations for the same thing: the ultimate spirit, or a connecting force, which some of us call God," Ricker said.

There are many sects of Buddhism, but generally there is no sovereign God or divinity in the tradition. Many Buddhists view God as the connecting force in nature. The Religious Society of Friends was founded on Christian principles, but there is a wide swath of belief among Quakers about God.

On the Sangha's Saturday meeting days, members of the group gather at the Friends Center for their afternoon meditation. They sit in chairs forming a circle around a small table. The smoke from a lighted stick of incense rises slowly from its holder. On this day, group member Maureen Fitzpatrick started the afternoon session by tapping a small bell three times lightly.

"Body speech and mind in perfect oneness," recites George Hoguet, of Media, Pa., a nurse and member of the group.

"For every in-breath, I take a step and out-breath, I take a step, so we're walking very slowly," Shen, a college math teacher, said. "You become very mindful and notice things that you didn't before." It might be a trinket in a window, or the smell of flowers if the meditation is outdoors, Shen said.

"Even if it looks like we could be off somewhere by ourselves, it's a sharing of our practice that I find supportive," said Elizabeth Savage, an administrator for the Jewish Federation of Greater Philadelphia.

After the meditation was over, the group participated in a tea ceremony and conversation that maintained the deliberate speed.

Savage talked about her difficulty "being present" at work, and Hoguet discussed the death of his former partner. Fitzpatrick demonstrated a yoga position that related to a discussion of the word namaste, which is, among other things, a Hindi greeting that means "the spirit in me meets the same spirit in you."

Even in drinking tea, eating cookies and chatting socially, the concept of mindfulness continues. Sangha members clasped their hands in a prayer position and bowed briefly as a respectful sign that they were about to speak. The rest of group responded in kind.

The discussion concluded, and Fitzpatrick closed the session by tapping the bell three times lightly.