A surge of swanky Buddha-themed bars and restaurants begs the question: WWBD (What Would Buddha Do)?

New York, USA -- The lights are so dim at Tao Asian Bistro, a Manhattan restau­rant and bar, you can barely read the menu to see the ingredi­ents in your $12 Tao-tini cocktail. Above all the flirting, drinking, and spending, an illuminated 16-foot Buddha statue looms. In the past year, Buddhism-themed restaurants and bars have proliferated; there are now at least 20 in about 13 cities. 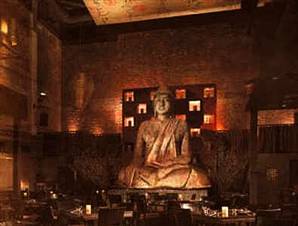 What would Buddha do? Drinking liquor, eating meat and, in gen­eral, spending huge sums on sensual indulgence would seem to con­flict with the core Buddhist tenets of simplicity, vegetarianism, and moderation. The Buddha wasn't all that into cruising, either. "Men and women meeting each other without pure intentions violates mindfulness trainings," says True Virtue, a fully ordained nun in Thich Nhat Hanh's Vietnamese Zen tradition, at the Green Mountain Dharma Center in Ver­mont

Buddhism as a mar­keting tool is not new. Images of Buddha plaster everything from t-shirts to $200 jeans to Victoria's Secret tankinis (which were protested by a group of Vietnamese American Buddhists). Do the owners of these Buddhist-themed bars and restaurants give any thought to the religion they're borrowing? “Not really, I have to be honest with you, I didn’t,” says Stephen Starr, owner of Buddakan—a trendy restaurant with outlets in Philadelphia, and recently, Manhattan. In designing his restaurants, he "was looking for an image that felt good and safe."

Gregory Levine, a University of California at Berkeley associate professor and Buddhist art expert, suggests that because Buddhism comes from Asia, many Americans view it as "exotic," thereby opening the door for some to exploit it for commercial gain or fashion.

In other words, Americans who find Buddha-booze sexy might be offended by sipping Martyr-tinis under a giant illuminated crucifix. But even some Buddhists have gotten into the act.

Lama Surya Das, American Buddhist founder of the Dzogchen Foun­dation, is developing an ice cream flavor with Ben & Jerry's called Jolly Lama-a gold and maroon-swirled sorbet that's in the early stages of review-and plans to donate his profits to a Tibetan refugee project. Of this booming phenomenon, he says, "Buddha doesn't mind, Buddha's open-minded. Buddha's a fat, happy laughing Buddha, and if anything he'd want to say, 'Don't overdrink, don't drink and drive, and don't overeat,' because he taught the middle way, not a way of austerity or grim unworldiness."

But Starr, the owner of chic Buddakan, doesn't feel he's hurting anyone by profiting off of Buddha's hip, peaceful image. He says the concept has gone over well, even with traditionalists.

Right after the restaurant opened, a group of Buddhist monks came in and Starr fretted that they would be offended. But one monk assuaged him with these sage words of wisdom: “This Pad Thai is better than my mom’s."