American Buddhism on the rise

The Dalai Lama's visit spotlights the fact that, with 1.5 million adherents, Buddhism is America's fourth-largest religion.

Cambridge, MASS. (USA) -- That genial face has become familiar across the globe - almost as recognizable when it comes to religious leaders, perhaps, as Pope John Paul II. When in America, the Dalai Lama is a sought-after speaker, sharing his compassionate message and engaging aura well beyond the Buddhist community.

After inaugurating a new Dalai Lama Center for Peace and Education in Vancouver, B.C., the Tibetan leader this week begins a visit to several US cities for public talks, sessions with young peacemakers, scientists, university faculty, corporate executives, and a California women's conference. But he'll also sit down for teach-ins among the burgeoning American faithful.

Buddhism is growing apace in the United States, and an identifiably American Buddhism is emerging. Teaching centers and sanghas (communities of people who practice together) are spreading here as American-born leaders reframe ancient principles in contemporary Western terms.

Though the religion born in India has been in the US since the 19th century, the number of adherents rose by 170 percent between 1990 and 2000, according to the American Religious Identity Survey. An ARIS estimate puts the total in 2004 at 1.5 million, while others have estimated twice that. "The 1.5 million is a low reasonable number," says Richard Seager, author of "Buddhism in America."

That makes Buddhism the country's fourth-largest religion, after Christianity, Judaism, and Islam. Immigrants from Asia probably account for two-thirds of the total, and converts about one-third, says Dr. Seager, a professor of religious studies at Hamilton College, in Clinton, N.Y.

What is drawing people (after that fascination with Zen Buddhism in the '50s and '60s)? The Dalai Lama himself has played a role, some say, and Buddhism's nonmissionizing approach fits well with Americans' search for meaningful spiritual paths.

"People feel that Buddhist figures like the Dalai Lama and Thich Nhat Hanh of Vietnam are contributing something, not trying to convert people," says Lama Surya Das, a highly trained American lama in the Tibetan tradition. "They are not building big temples, but offering wisdom and ways of reconciliation and peacemaking, which are so much needed."

Even a larger factor, he suggests, is that Buddhism offers spiritual practices that Western religions haven't emphasized. 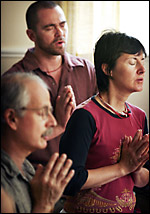 CALM: Participants join in meditation at the Cambridge sangha. Buddhism arrived in the United States in the 1800s.
JASON BEAN   >>

"People are looking for experiential practices, not just a new belief system or a new set of ethical rules which we already have, and are much the same in all religions," Surya Das says. "It's the transformative practices like meditation which people are really attracted to."

At a sangha "sitting" in Cambridge, Mass., last week, some 20 devotees sat cross-legged on four rows of large burgundy-colored cushions before a small candlelit altar. A practice leader led a quiet hour of meditation interspersed with the chanting of prayers and mantras. The group then gathered in a circle for a half hour of discussion.

Carol Marsh, an architect who served as practice leader for the evening, had an interest in finding a spiritual path for years, but was "resistant to anything nonrationalist," she says afterward in an interview. "Then I read 'Awakening the Buddha Within,' [Surya Das's first book on 'Tibetan wisdom for the Western world'], and it spoke to me directly.... My ultimate aim is liberation."

After eight years of practicing, "I am happier, more grateful, more able to roll with whatever punches or moments of annoyance may present themselves," Ms. Marsh says.

What's so valuable to Jane Moss, who's been practicing 15 years, is learning how "to be in the present moment." And also to accept that reality involves perfection and "to view the world as good and people as basically loving." Each month, the group holds a meditation focused on love and compassion.

The sangha has been meeting since 1991, when Surya Das opened the Dzogchen Center here after decades of training with Tibetan teachers. Before becoming a lama, he was Jeffrey Miller, raised in a middle-class Jewish family in Brooklyn. An anti-Vietnam-War activist while at the University of Buffalo (N.Y.), he was stunned when his good friend Allison Krause was shot and killed by the National Guard at Kent State in 1970.

"When I graduated in 1972, I was disillusioned with radical politics - I realized fighting for peace was a contradiction in terms, and I wanted to find inner peace," he explains. Instead of graduate school, the young Miller headed off on a search that ended up in the Himalayas, where he spent the rest of the '70s and '80s learning from Buddhist teachers while teaching some of them English.

There were plenty of struggles and moments of doubt, but also illumination, he says. Following a centuries-old path to cultivate awareness, his training included two three-year retreats of intensely focused practice.

"One of the great lessons of that monastic brotherhood was learning to love even those people I didn't like," he says, speaking by phone from a retreat in Texas where he's training others.

There are many schools of Buddhism, but "everyone agrees that the purpose is the individual and collective realization of Enlightenment," Surya Das continues. "That is defined as nirvanic peace, wisdom, and selfless love. It involves a practice path that depends on meditation, ethical behavior, and developing insight and active love."

<< LEADERS: Lama Surya Das (left) is one of the foremost Western Buddhist meditation teachers. The Dalai Lama (right) of Tibet is currently on tour in North America.
WWW.SURYA.ORG; RICHARD LAM/AP

Buddha means "awakened" in Sanskrit, a language of ancient India, where Siddhartha Gautama founded the faith and an Eightfold Path some 2,500 years ago. Buddhists believe that through that path one awakens to what already is - "the natural great perfection." They do not speak of God, but of the human or ego mind with a small "m," and the Buddha (awakened) Mind with a big "m."

"Healing energy takes place through an agency far greater than, yet immanent in each of us," Surya Das has written. "We are all Buddhas."

One doesn't have to subscribe to a catechism or creed, or be a vegetarian. Nor do people have to give up their religion. That's why some Americans speak of being Jewish Buddhists, for instance.

The Dalai Lama, in fact, often encourages people to stay with the faith of their cultural upbringing, to avoid the confusion that can sometimes result from a mixing of Eastern and Western perspectives.

Yet others are going more fully into Buddhist study, particularly as the writings and training by American-born teachers increase its accessibility.

The Dzogchen Center (Dzogchen means "the innate great completeness"), which has sanghas in several states, teaches an advanced Tibetan practice; annually, it offers numerous retreats, from one-day to two-week gatherings. Surya Das - whose Tibetan teacher gave him his name, which means "follower or disciple of the light" - is the spiritual director.

Thirty devotees are currently cloistered in a 100-day retreat for advanced students at the Dzogchen retreat center outside Austin, Texas. They are in the third of a 12-year cycle of silent retreats - which will likely produce new teachers.

Several Tibetan teachers helped introduce Buddhism in the US, and one, Chogyam Trungpa, founded Naropa University in Boulder, Colo. But the teacher succumbed to excesses that tempt clergy of various faiths - alcoholism and sexual misconduct.

The Dalai Lama has warned, too, of some teachers who seek leadership for financial rather than spiritual reasons. The issue of students and teachers is today one of the most controversial in transmission of teaching from East to West, says Surya Das.

Still, a healthy American Buddhism with its own characteristics is emerging. It is less doctrinal and ritualistic than in the East and more meditation oriented, less hierarchical and more democratic and egalitarian. It is more lay-oriented than monastic, and more socially and ecologically engaged.

Perhaps most noticeably, "the role of women as leaders and teachers is very significant here," Seager says.

The Dalai Lama speaks of Buddhism naturally taking new forms in each culture. As he travels the globe, he also emphasizes building bridges between faiths, as well as finding nonviolent means for resolving differences. This weekend, the Nobel Peace Laureate will spend time with youths in Denver engaged in conflict-resolution projects. He'll bless the Great Stupa, the largest example of Buddhist sacred architecture in the US, located at Colorado's Shambhala Mountain Center.

Next week he'll speak to 20,000 at a football stadium in Buffalo, and at the alma mater of Surya Das, who was one of his attendants for several years. The American lama will also speak.

"Buddhism made me a mensch and brought me happiness," Surya Das concludes contentedly, "and helped me find my place in life and the universe."