Ithaca, NY (USA) -- If not for a few Tibetan prayer flags waving from the beet-red porch, Namgyal Monastery might look like any other old Victorian house on North Aurora Street. 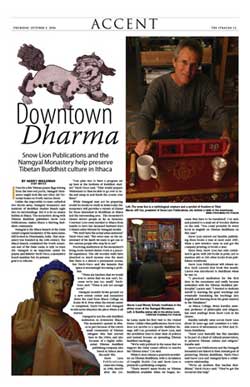 Unlike the impossible-to-miss St. Paul’s United Methodist Church two blocks away, Namgyal Monastery and Institute of Buddhist Studies blends right into its surroundings. But it is by no means hidden in Ithaca. The monastery, along with Tibetan Buddhist publisher Snow Lion Publications, makes Ithaca a thriving Buddhist community.

“Our plan was to have a program set up here at the Institute of Buddhist studies,” Teich-Visco said. “That would prepare Westerners to then be able to go over to India and jump in and finish the course over there.”

While Namgyal may not be preparing would-be monks to study in India today, the monastery still provides a variety of classes for those interested in Buddhism in Ithaca and the surrounding area. The monastery’s classes attract people from as far as Syracuse. Courtney Love even traveled to Ithaca from Seattle to have her deceased husband Kurt Cobain’s ashes blessed by Namgyal monks.

“We don’t have the actual ashes anymore,” Teich-Visco said. “But every year on the anniversary of his death, we seem to get one or two curious people who stop by to see.”

Practicing meditation in the monastery’s living room-turned-shrine room is a peaceful experience. The old wooden walls have absorbed so much incense during the years that there is an almost permanent aroma, but Teich-Visco said she laments that space is increasingly becoming a problem.

“There are teachers that we would love to invite that we just can’t because we’re just too small,” Teich-Visco said. “There is just not enough room.”

Namgyal recently broke ground on a new retreat center and monastery down the road from Ithaca College on Route 96-B. Even when the retreat center is completed, Teich-Visco said Namgyal would never abandon the place where it all started.
Namgyal is not the only Buddhist institution in downtown Ithaca. The monastery opened in Ithaca in part because of the town’s small community of Tibetan refugees who had arrived here in the 1980s, and also because of a highly influential Tibetan Buddhist publishing company, based in Ithaca since the early ’80s.

Snow Lion Publications was named after the mythological creature of the same name, which is a national symbol of Tibet. It came into being in 1980, shortly after the Dalai Lama made his first visit to the United States. Unlike other publications, Snow Lion does not ascribe to a specific Buddhist lineage. Jeff Cox, president of Snow Lion, said the newsletter tries to steer clear of politics and instead focuses on spreading Tibetan Buddhist teachings.

“We’re only political in the sense that we support the Dalai Lama’s efforts to resolve the Tibetan issue,” Cox said.
While it does release a quarterly newsletter on Tibetan Buddhism with a circulation of roughly 30,000, Cox said Snow Lion is primarily a publishing company.

“There weren’t many books on Tibetan Buddhism available when we began because they have to be translated,” Cox said, and pointed to a small set of wooden shelves on the wall. “You could probably fit every book in English on Tibetan Buddhism on this case.”

Snow Lion started out humbly, publishing three books a year at most until 1987, when a new investor came in and had the company print 10 books a year.
Since then, Snow Lion has only continued to grow, with 200 books in print, not to mention 400 or 500 other books from publishers worldwide.

Snow Lion Publications will release author Zach Larson’s first book this month. Larson, who lives in New York City, was introduced to Buddhism when he was 16.
“I practiced meditation for the first time in the mountains and really became enthralled with the Tibetan Buddhist philosophy,” Larson said. “I wanted to dedicate myself to learning the great teachings and eventually translating the teachings into English and learning from the great masters in the Himalayas.”

At Ithaca College, Brian Karafin, assistant professor of philosophy and religion, has used readings from Snow Lion in his classes. Karafin initially came across Snow Lion about 20 years ago and considers it a valuable source of information on Tibet and Tibetan Buddhism.

“Snow Lion basically has this mandate to be part of a kind of cultural preservation, to preserve Tibetan culture and religion,” Karafin said.

Snow Lion Publications and the Namgyal Monastery are linked in their mutual goal of preserving Tibetan Buddhism. Teich-Visco said Snow Lion and Namgyal have a collaborative relationship.

“We’re an institute that teaches Buddhism,” Teich-Visco said. “They’ve got the resources that help.”