Wilton, CT (USA) -- It took four months for sand to be delivered to the Montessori School of Wilton from India. When it was revealed the students of the school sat and watched it being poured from the package this past week. 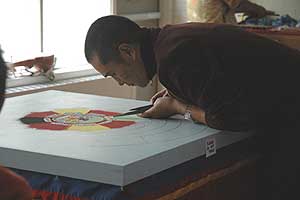 << Tenzin Samten, a Buddhist monk, works on a sand mandala at the Montessori School of Wilton Monday afternoon. After finishing the sand mandala — slated to take a week — members of the school will go with Tenzin Samten to empty the sand into running water. — Robin Walluck photo

Wilton mothers Laurie McTeague and Sheri Kimball said they enrolled their children in the Montessori School here for lessons like the one they had that day. Two Tibetan men were visiting the school to bring a slice of their culture to the United States. They arrived Thursday, Oct. 19, and are planning to leave Tuesday, Oct. 31.

Ms. McTeague said the school empowers the students to think outside of the box, by encouraging them to explore. Monday, she said it was special to see four- and five-year-olds working with the Tibetan heritage.

“This isn’t a grown-up thing, this isn’t an adult thing,” it’s something someone any age can do do, Ms. McTeague said. “The school has wonderful internationalism about it.”

Ms. McTeague and Ms. Kimball said they like the diversity in ages — older kids teach younger kids — and diversity in cultures inside and outside the classroom. They said there are students of different backgrounds and cultures who attend the school, and visitors like those from Tibet help expand their children’s knowledge.

The sound of metal rubbing against metal filled the family room at the Montessori School. It sounded more like the beginning of a band practice than the students being taught a sacred ritual. The students were being shown the art of making sand mandalas.

A sand mandala is a Buddhist tradition of using special sand to design pieces of art which are later placed into running water, and as the sand is washed away it takes with it sins.

Tenzin Choegyal and Tenzin Samten were two Tibetan Buddhists who came to the United States to share their traditions.

During a session on Monday, Tenzin Samten remained bent over a table with intense concentration as he filled a lotus blossom-shaped design with green, red, black and yellow colors. He was making a sand mandala.

Next to him, Tenzin Choegyal squatted at a tiny table, teaching youngsters how to make their own art. With ease and a light tone, Tenzin Choegyal helped each student fill sand into their design.

“We’re sharing the Tibetan culture with the kids,” Tenzin Choegyal said. “I don’t know how it will go, but we’ll try.”

Tenzin Choegyal said he and Tenzin Samten would teach the Montessori students Tibetan songs and make prayer flags. The flags will be in the color of the elements: red, green, yellow and blue; a Lungta — a Tibetan horse — is to be in the center surrounded by poetry. Tenzin Choegyal said when the wind blows, the prayers would fly away.

Their backgrounds are a little different. Tenzin Choegyal fled Tibet with his parents to India. There, he went to a Montessori school started by the Dalai Lama’s sister, Jetsun Pema. The school was called the Tibetan Children’s Village School. Tenzin Choegyal currently lives in Australia where he continues with his musical career.

He hasn’t been back to Tibet, but wants to return. “Not yet, when it is safer,” Tenzin Choegyal said. His parents were Buddhists, and so is he. “Whatever you grow up with, you tend to do those things,” he said.

Tenzin Samten is a monk in the Namgyal Monastery, who was born in Tibet. He began learning sand mandala at 19, and was taught by Buddhist monks for seven years how to design the art.

He said on a daily basis he makes a punja ceremony, a prayer service, with the Dalai Lama.

Tenzin Samten and Tenzin Choegyal are staying with residents of Westport.

The two men were introduced to the Montessori system after the director of the Wilton school, Mary Zeman, saw Tenzin Choegyal perform in Australia.

“It just felt like the resonance and the transition made me forget I was halfway around the world,” she said about seeing Tenzin Choegyal perform. After that, she knew she needed to ask him to come to Connecticut. He agreed, but on one condition: he would bring Tenzin Samten.

The Dalai Lama is the 14th Dalai Lama, born as Tenzin Gyatso, and is both the head of state and the spiritual leader of Tibet. He was born on July 6, 1935, to a farming family, in a small hamlet located in Taktser, Amdo, northeastern Tibet. The Dalai Lamas are believed to be manifestations of Avalokiteshvara or Chenrezig, the Bodhisattva of Compassion and patron saint of Tibet. Bodhisattvas are enlightened beings who have postponed their own nirvana and chosen to take rebirth in order to serve humanity.