Boston, MA (USA) -- The family of 72-year-old Cho Fook Cheng of Brookline knew there was no chance that he would ever wake up again. 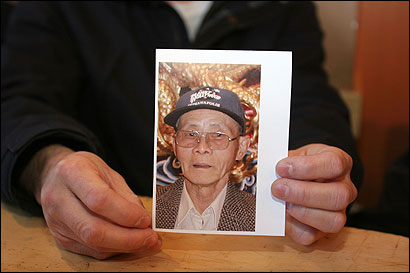 << A photo of Cho Fook Cheng, 72, held by his son. The family reluctantly agreed to let his last dose of medicine run out. (Christina Caturano for the Boston Globe)

Last week, doctors declared Cheng, a grandfather of seven who suffered cardiac arrest the day after Thanksgiving, brain-dead and said it was time to remove him from the ventilators and intravenous medicines keeping his organs functioning.

But the family refused to let doctors take Cheng off the life-support system because his heart was still beating. They said their belief as Buddhists was that Cheng's beating heart meant his spirit and consciousness was not ready to move on. Taking him off life support, they said, would be the same as killing him.

The Chengs hired a lawyer and obtained a restraining order against the hospital; Beth Israel Deaconness Medical Center Friday took Cho Cheng's wife, Joyce, and his son, Henry, to court to get an order allowing doctors to remove life-support systems.

Yesterday Cheng died after the family reluctantly agreed to let his medicine supply to run out, allowing his heart to stop beating naturally and at the same time honoring the family's understanding of Buddhist faith.

But the legal battle continues. On Tuesday, both sides will again meet in Suffolk Family and Probate court in a case that points to the delicate issue of how hospitals should reconcile modern technology with religious beliefs held by their patients' families.

The case highlights a clash between state law, which considers brain-dead patients legally dead, and religious beliefs of some families who say a patient is still alive as long as the heart is beating.

"This is not over," said the family's lawyer, Peter J. Unitt, who vowed to take the case to the Supreme Judicial Court and the Legislature if necessary. "This is something that the courts will have to deal with."

"More and more we are handing ourselves and our religious faith over to the court of law and the government, asking them to define our beliefs," Unitt said. "In this case, this family wanted him to die the way he was supposed to religiously. Instead, they were forced to go to court at a time when they should have been grieving."

Sitting at a Brookline coffee shop yesterday, just an hour after his father's heart stopped beating, Henry Cheng, 41, struggled to find the words to describe his ordeal. At the mention of his father's name, Cheng broke down, crying into his hands. His mother, Joyce Cheng, sat by his side, but stared off in silence.

"We knew the situation was grave," said Lily Cheng, Henry Cheng's wife. "But we wanted him to go in peace, according to our religion. They kept pressuring us to take him off life support. They kept telling us to do it. In the end, he did not die the way he wanted. He didn't die honorably."

Dr. Lachlan Forrow, director of Beth Israel's ethics and palliative programs, said he sympathized with the Cheng family's plight and said the staff did everything it could do to accommodate them.

Unlike other end-of-life cases, such as the case of Terri Schiavo, a Florida patient who was in a persistent vegetative state when a state court ordered the removal of her feeding tube, Cho Cheng had no brain activity, Forrow said. Also, he said, Cheng's body was starting to rapidly deteriorate.

Even though he was on heart medications and a ventilator that kept his lungs and heart working, his arteries had constricted, and oxygen was not reaching his extremities. The hospital, Forrow said, has no strict policy about when a patient is removed from life support.

He said such decisions are made on a case-by-case basis, depending on the needs of the family. But in Cheng's case, the nursing staff was concerned that keeping him on ventilators would be inhumane, because his body was decaying.

Respect for religious tradition "is almost a sacred issue for us," said Forrow, adding that Beth Israel, established in 1916 partly in response to discrimination against Jews in Boston-area hospitals, has a history of flexibility when handling religious beliefs.

In the past, Forrow said doctors have kept brain-dead patients on life support when a patient is an organ donor and doctors need to harvest organs, for example, or when a family is traveling from afar and wants to hold a loved one's warm hand for the last time, he said. The hospital has also allowed families to close curtains and perform various religious or cultural traditions in private. But the Cheng family's request to keep Cheng's body on life support was unreasonable, he said.

"It seemed, particularly to us, beyond an unreasonable request, because, from a medical perspective with the problems he had, parts of his body were deteriorating biologically in a way our staff felt that it was dishonoring or not showing reverence for the peaceful way a body should be after death," Forrow said. "The normal routine we have for families is that we try to make the patient appear as peaceful and dignified as possible."

The hospital staff also sought research materials as guides in the teachings of Buddhism, Forrow said, but could not find any that told them how to reconcile medical practices with the Cheng family's desire to keep Cho Cheng on life support until his heart gave out on its own, a matter that could have taken weeks or longer.

One complication is that there are different Buddhist understandings of death, said John J. Makransky, a professor of Buddhism at Boston College.

"Tibetan Buddhism is the one that is the most renowned for the understanding of death," he said. "Within the Tibetan Buddhist system, there are different levels of consciousness, levels that may not be measured by scientific methods. Even if someone is brain-dead, there may be a level of consciousness communicated by the heart beating. Even if there is no measurable activity in the brain, there still could be consciousness."

While Buddhism is not a centralized religion, all Buddhists believe in rebirth, said Makransky, when consciousness becomes associated with another life after it leaves that body. For such a spiritual achievement, a peaceful state of mind in death is important to the Chengs in their Taiwanese form of Buddhism, Jing Tao Chung, Unitt said.

Unitt insisted that the issue of religious beliefs concerning death and the conflict of state and medical practices is an issue for the courts to decide.