Newtown, CT (USA) -- More than four years after its rejection by the Planning and Zoning Commission (P&Z), a religious group's proposal to construct a Buddhist temple/meeting hall on its ten-acre property in a residential area at 145 Boggs Hill Road is drawing wider public attention. 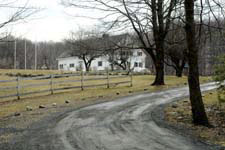 << The Cambodian Buddhist Society of Connecticut, Inc's, proposal to build a 7,600-square-foot Buddhist temple/meeting hall at this 145 Boggs Hill Road property was the subject of oral arguments at the Connecticut Supreme Court on March 6. -- Bee Photo, Gorosko

On March 6, the Connecticut Supreme Court heard oral arguments in the appeal of the Cambodian Buddhist Society of Connecticut, Inc, which seeks to overturn a lower court decision, which upheld the P&Z's February 2003 rejection of the society's proposal to build a 7,600-square-foot Buddhist temple/meeting hall.

The Hartford Courant, the state's largest newspaper, covered the court proceedings in its March 7 edition. The Courant also published a news feature on the topic on March 12.

The Courant's coverage was picked up by The Associated Press, a news agency that distributes published news stories. Organizations interested in the Buddhist temple issue provided The Courant's news content on their websites on the Internet.

The Supreme Court aspect of the news story has been posted on the ShortNews website, which is based in Germany. Earthtimes also has posted the content on its website.

Similarly, other organizations republished on their websites The Newtown Bee's March 9 news story on the Supreme Court appeal. Among those that posted The Bee's story were American Buddhist Net.

The Bee's previous coverage of the Buddhist temple issue has been republished on various Buddhist-oriented websites.

The Buddhists' appeal, which had been pending in the Connecticut Appellate Court, was taken over by the Supreme Court in seeking to expedite a final decision in the conflict. A five-member panel of that seven-member court heard the legal arguments in Hartford.

The Supreme Court is expected decide the case in the coming months. There is no deadline for a decision.

The primary legal issues in the case involve whether the P&Z's denial of a special permit, which is required to build the temple, violated the Federal Religious Land Use and Institutionalized Persons Act and also violated the state's Religious Freedom Act.

Also at issue before the Supreme Court is whether Pong Me, who is the Buddhist society's president, has legal standing in the appeal. A lower court had dismissed Pong Me's appeal because he did not personally own an interest in the Boggs Hill Road property.

The Buddhists charge that their right to freely practice their religion has been compromised by the P&Z's rejection of their application, while the P&Z maintains that the site proposed for the temple/meeting hall is an unsuitable one for the planned intensity of use, including its traffic and noise aspects.

The P&Z denied the temple application for a variety of reasons, including health and safety concerns, focusing on the site's water supply and septic waste disposal.

The Buddhist society did receive a wetlands permit for the project from the town's wetlands agency in November 2002.

Following lengthy consideration, P&Z members in February 2003 unanimously rejected the temple/meeting hall proposal, noting that the Buddhists' envisioned use of the property, involving increased traffic and noise, would be "far too intense for this particular site." The society has a monastery at the property.

P&Z members found that the sloping site holds a significant amount of wetlands. Such a constraint would limit the area available for the proposed temple/meeting hall, parking spaces for about 150 vehicles, and activities involving 450 or more people on weekends, according to the P&Z.

The temple/meeting hall proposal drew heavy opposition from nearby property owners, who listed traffic problems and noise among their main complaints. Eight nearby residents entered the Buddhist society's court action as intervenors, siding with the P&Z in the case.

In March 2003, citing religious freedom, as protected by federal and state law, the society filed a Danbury Superior Court appeal in seeking to overturn the P&Z's rejection of its application. Through the appeal, the Buddhist society had sought to have a judge order the P&Z to approve the temple/meeting hall.

The society now contends that Judge Frankel erred in interpreting applicable law in rendering her decision against Buddhist society.

In her legal decision, Judge Frankel wrote, "The society's claim alleging a violation of the equal protection clause [of the law] is unavailing because the court finds no evidence of selective treatment. The court further finds the society has neither established a 'substantial burden' nor a 'burden' on religious exercise sufficient to meet its prerequisite burden for a claim under [applicable federal and state law]. ...The court finds insufficient evidence to determine that the [P&Z's] denial of the special permit, pursuant to substantial evidence in the record, was unreasonable, arbitrary, or illegal."

The Buddhist society maintains that the P&Z denial of the temple/meeting hall application violated applicable law because it imposed a substantial burden on the society's exercise of its religion.

"Many of the society's members, including Pong Me, escaped the 'killing fields' of Pol Pot and the Khmer Rouge regime to seek refuge in this country, a safe haven where they could freely practice their religion and live out their lives in peace. After years of work and saving, the society's members sought to build a permanent temple and meditation center at 145 Boggs Hill Road," the Buddhist society states in its legal papers.

Town officials have said they would help the Buddhist society find a better location for a temple/meeting hall elsewhere in town.

First Selectman Herbert Rosenthal has said that the P&Z's rationale for rejecting the temple application was not discriminatory, stressing the adverse traffic issues posed by the location.