Framingham, MA (USA) -- It's the shiny new vinyl kitchen floor that first strikes a visitor to the New England Buddhist Meditation Center. That floor - and the guest bathroom that also recently had a similar makeover - is the handiwork of Venerable Bhante Dhammajothi, a "Mr. Fix-it" in rust-colored robes. 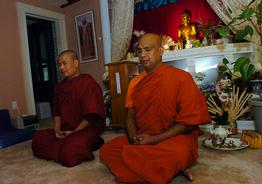 Dhammajothi installed the floor and redid the bathroom shortly after moving into the nondescript 140-year-old house on Johnson Street.

He is also known to repair the Ford Contour before a trip to New York, where the main center for all Sri Lankan monks on the East Coast are located.

There is no sign on the front lawn or hints of what is inside, which is a primary residence for Dhammajothi, and a weekly meditation session spot for a small circle of practicing Buddhists in the area. It also appears to be the only place of its kind in Framingham, and perhaps in all of MetroWest.

Dhammajothi, 50, and a rotation of one or two visiting monks, offer the perspective that while material pleasure is fleeting, the desire remains constant, creating suffering in people's lives.

"We spend so much time and money to obtain things we want but we're never satisfied," said Venerable Madawela Punnaji, 75, a visiting monk over lunch in the center's dining room.

The temple room is a converted living room decorated with an altar, bouquets of flowers and burning incense. A 3-foot Buddha statue sits at the center of the altar, surrounded by 20 6-inch replicas placed neatly in rows, all wrapped in clear plastic resembling a Buddhist gift shop. The room is a tight squeeze for the 10 people who attend its Wednesday night meditation session, so most celebrations and large groups for the past four months met at the Galvin Chapel at Babson College in Wellesley.

Dhammajothi is from Sri Lanka, a small island nation off the southern coast of India. He practices and teaches Theravada Buddhism, considered to be the closest to the Buddha's true teaching methods over 2,550 years ago. Theravada (pronounced terra-VAH-dah) means "elder doctrine" in the ancient Pali definition. Its followers refer to the earliest known surviving record of the Buddha's lessons for its inspiration, known as the Tipitaka. To the monks, the way to a peaceful world begins within, which then radiates to others.

"Americans have trouble controlling their emotions, such as sexual urges and anger," said Punnaji as Dhammajothi nods in agreement. "It started during the suppression of the Victorian era," he said.

When asked if the Internet and TV continue to feed those emotions, they both agreed. But, Punnaji added, "Despite that, I have met American Christians who are better Buddhists than Buddhists."

Dhammajothi began his journey to cultivate such qualities at a young age. With his parents' blessing, Dhammajothi became a monk at 13. He went to college in Sri Lanka to earn various degrees in education, followed by a 25-year career as a teacher and a high school principal in his native country. He moved to the United States in 1993 at the request of the New York-based center to help meet American's growing thirst for Buddhism.

"I teach Buddhist lessons to American-born children of Sri Lankan descent," he said.

Ten to 15 Sri Lankan children attend Dhammajothi's twice-a-month "Sunday School" classes, some of whose parents drive from as far away as Maine and southern Connecticut.

"Sri Lankans grew up in the Buddhist culture," said Pri MacDonald of Billerica who married an American and immigrated to the United States seven years ago. "Moving here is an adjustment, so many Sri Lankans will drive long distances to connect with their culture."

Although initially set up as a center for immigrants, Dhammajothi wants to reach out to everyone who wants to learn about the Buddha. He found Framingham to be an ideal location.

"Americans are catching up to Buddhism," said Punnaji. "I was in Wal-Mart recently, an American woman approached me and bowed," said Dhammajothi, while pressing both palms together.