Danbury, CT (USA) -- Buddhists monks who escaped the genocide in Cambodia in the 1970s sat in tranquil solitude recently, chanting in a language more than 2,500 years old. 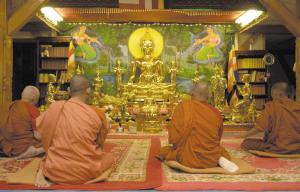 << Monks pray at their temple on Boggs Hill Road in Newtown

The monks perform the chant twice a day before a golden statue of Buddha at their home in Newtown in an effort to pay respect to the former Indian prince who they say reached enlightenment under a fig tree surrounded by a babbling brook and an adjoining hillside thousands of years ago.

The brook and hillside that exist on a 10-acre site in Newtown would make it a perfect location for a temple and meeting hall, according to members of the Cambodian Buddhist Society of Connecticut, who own the property.

"That's why we believe this site is so important," said Pinith Mar, a member of the society who escaped war-torn Cambodia at the age of 7. "A temple should represent the peaceful way and exist among these elements."

He explained that the natural elements help to create a calming and relaxing atmosphere that is critical in Buddhist traditions and worship.

Buddhists monks and worshipers meditate as a way to eliminate their internal suffering and work towards a path of enlightenment. Many of the followers of Cambodian Buddhism know suffering first hand.

Mar said he fled Cambodia after half his family was killed by the Khmer Rouge communist regime that took control of the country in 1975. He watched his father die before his eyes after stepping on a land mine while working in the fields.

The communist regime executed those they believed were educated "" including teachers, lawyers, doctors, Buddhist monks and those who wore glasses. Estimates for the death toll range from 740,000 to 3 million people.

Those that survived the genocide were separated from their families and placed in work camps.

"They evacuated my family to the jungle and put us to work clearing the forests, building dams and working the rice fields," Mar said. "Many people died from starvation and disease.

If you saw a crab crawling along the mud while you worked, you quietly picked it up and looked for an opportunity to eat it while none of the guards were looking. I saw a whole generation wiped out."

The commission eventually denied the application for the 7,600-square-foot temple, because the proposal was inconsistent with "reasonable expectations of noise and activity that a quiet rural neighborhood should not have to tolerate."

The denial in February 2003 also states that the Asian design of the temple building and grounds were not consistent with the New England architecture throughout the neighborhood.

Robert Poulin, a member of the commission and a resident of Boggs Hill Road, declined to comment on the application because members of the society have appealed the decision to the state Supreme Court. A decision by the court is expected in coming weeks.

"I don't really want to speak about the matter until the court has made their decision," he said.

Personally, Poulin said he doesn't believe the commission had a problem with a Buddhist temple in Newtown, but there were a lot of concerns about the location. Commissioners in the past have said they had problems with the sharp curve in the road in front of the property and traffic that could be generated from the site.

"If they wanted to build a temple in a more suitable location, I'd be all for it," he said.

Residents said the four Cambodian Buddhist monks who live on the property make great neighbors, but echoed concerns about the traffic that a temple could attract to the small rural road.

The application states that expected traffic to the site would include about 30 to 50 cars during an average weekend and about 450 cars during one of the four major religious holidays.

"If they wanted to build a small retreat or something like that, I don't think people would have a problem with that," said Chet Hopper, who has lived on Boggs Hill Road for more than 45 years. "The current proposal is a gross overuse of the property. The property just isn't big enough."

Hopper added that few of the Buddhists come from Newtown.

"This is not the case of a local group of people who want to build a religious edifice," he said. Many neighbors said the residence the monks use already serves as a temple and another, larger building isn't needed.

"They don't need another temple," said one resident living within sight of the property who declined to give his name. "It's something the people here won't put up with. But we have no complaints about the four monks that live there now. They make great neighbors."

Jack Sikora, a professor at Western Connecticut State University who teaches a class in Buddhism, said he could only see Newtown benefiting from having a Buddhist temple in town.

"One of the major tenants of Buddhist doctrine is Ahisma," he said. "It's the principal that one should do no harm to others and should extend themselves to be tolerant, caring and compassionate.

"In my mind, I think any neighborhood would benefit from a subculture that espouses these kinds of beliefs."

Sikora added that Buddhists are taught to obey the law and are obligated to pursue truth and righteousness.

"In participating in the legal challenge they are staying in the parameters of the religion," he said. "I suspect that when the court issues its decision, they will respect the outcome."

Mar said the building where the monks live on the property doesn't serve as a true temple. It has many distractions during chanting and meditation exercises, including a nearby kitchen, a wood stove that provides heat during colder months, and a phone that can ring at inappropriate moments.

Members of the society are also forbidden from performing any religious worship on the site, because of a cease and desist order issued by the town shortly after the Buddhists purchased the property, when many members came from throughout the region to celebrate the acquisition and what they thought would be the first Cambodian Buddhist temple in the state.

"I can't bring my wife and children here to practice Buddhism because it would be against the cease and desist order," Mar said.

Vicheth Yim, one of the monks living on the property, said through an interpreter that now is a critical time for the religion.

"As the older generation dies, there will be nobody left to teach the younger generations," he said. "There is a great fear that we may lose our culture and our traditions. We just want to live in peace."