CHESTNUT RIDGE, NY (USA) -- It isn't every day that third-graders grapple with concepts like wisdom, compassion and good intention. Yesterday students at Green Meadow Waldorf School were exposed to these ideas in the Buddhist context, ahead of a school project about Bhutan, a Himalayan country that is the world's last Buddhist monarchy. 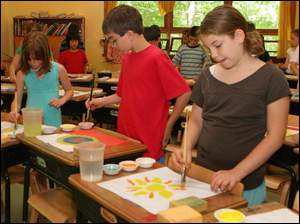 The third-graders made prayer flags that will be taken to Bhutan next week and hung outside a school in the country's Punakha district, a four-hour walk from the nearest road.

"Your flag coming from New York will bring whatever good intention you put into it, into Bhutan," Tom Yarnall, professor of Buddhist studies at Columbia University, told the children. Yarnall, who has a child at Green Meadow, came to talk to the students about Bhutan and Buddhism to help them understand the importance of prayer flags in Buddhist cultures.

Prayer flags, square or triangular pieces of colored cloth with prayers, symbols and invocations imprinted on them, can be seen fluttering in the breeze in Buddhist countries. The flags are meant to carry the good wishes and prayers of the person who strung them up, and are said to bring happiness, prosperity and longevity to all beings.

Students at Green Meadow became interested in making the prayer flags after a former student joined a group of teenagers and three adults planning a trip to Bhutan. The group will install solar panels at the Woulathang Community Primary School in Toewang Gewog as part of a Nepal-based program called Solar Sisters that does solar panel installations in South Asia.

The Woulathang Community Primary School offers classes up to the fifth grade and has an enrollment of 123. It also houses students at night, all of whom study by kerosene lamps or candles. Solar panels would help on rainy and cloudy days, and at night, said Suzanne Dickerson, who has a daughter at Green Meadow and will be part of the trip to Bhutan. Her son, Josh Davis, 17, is a student at Dwight Englewood School in New Jersey.

"It will have an enormous impact on the children's life," said Dickerson, a resident of Leonia, N.J. "They take their education very seriously."

The day's lessons made Zachary Broadman, 9, thoughtful as he painted his flag bright yellow, orange, green and red.

"I'm trying to say that I want them to be happy, to make the place beautiful and to have a good education," said Zachary, of Montvale, N.J.

About Bhutan
Bhutan, a landlocked nation between India and China, is the last Buddhist monarchy in the Himalayas. For centuries, it isolated itself from the world, sleeping through the Industrial Revolution, colonialism, the advent of electricity and modern medicine. It began opening up to the rest of the world in the 1970s, becoming a member of the United Nations, gradually introducing a money economy, and as recently as the late 1990s, TV. Bhutan has a population of less than 1 million. It is culturally homogenous; it derives its principal identity from Tibet. Mahayana Buddhism and Hinduism, both indigenous to the region, are the main religions. It has used its late entry into the world of nations by proposing a unique model of development that measures progress not by wealth but by Gross National Happiness. It plans to adopt a written constitution next year and become a constitutional monarchy.