BARNET, Vermont (USA) -- For 30 years it has overlooked the village of Barnet, yet the Milarepa Center, a Buddhist meditation facility, has remained a well-kept secret. 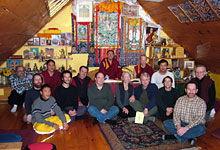 Not that keeping it a secret has been intentional, simply the smallness of the facility - though situated on 300 acres - has kept everything on a word-of-mouth level.

But things are beginning to change. New visions and future plans have cropped up and the center has its sights set on growth.

Much like its neighboring meditation center, the well-known Karme Choling, the Milarepa Center is a retreat facility. People come and often spend weekends, weeks or longer listening to the various teachings offered.

Director Wendy Hobbs described it as the perfect place for people to come who need a break from the hustle and bustle of day-to-day life.

"You can come and sit and relax, yet get some pretty intense things to think about," she said during an interview at the center on Thursday. "It offers so much to people."

Visitors fly in from all over, Hobbs said - California, Florida, and yet not everyone is a Buddhist. She said what makes Buddhism so unique is that you don't have to be a Buddhist to practice what they teach.

"Everyone's looking for happiness," Hobbs said. "People come here and they start listening and it's like ... lightning bolts." She made a few popping motions with her hands around her head. "It's life changing."

Situated on 300 acres of forest and meadow overlooking the Connecticut River, the center offers programs based on traditional Tibetan Buddhist meditation practices, according to www.milarepacenter.org.

The main facility occupies a farmhouse dating back to 1865. Nearby is a converted barn, flower and vegetable gardens along with two retreat huts served by the main kitchen. Two additional, more remote huts, have their own kitchen and accommodate longer stays. The facility can house about 22 people at one time, not including the exterior grounds for tenting.

The Milarepa Center is a nonprofit organization and those who work there are volunteers. Though it operates on a "shoestring budget," Hobbs said they don't charge anything for their teachings, they just ask that people make a donation to cover room and board.

Hobbs, who has been director for about four years, said she's frequented the center for the last 20 years of her life, bringing her children when they were young and growing closer and closer to the center's way of life. She lives across the border in New Hampshire where she works in the field of assisted care living.

Hobbs first encountered Buddhism in her early twenties while traveling around India and Nepal. She met some Buddhist teachers who helped her discover, what she called, "the truth."

The center in Barnet is overseen by Lama Zopa Rinpoche whom, according to Hobbs, has a vision to see the center grow. Right now she said they are trying to transition into more year-round programming while striving to find a resident teacher who will work at the center full time.

That's not been so easy though because as the demand for Buddhist teachers in the West has grown, the number of actual teachers has not. However, the Milarepa Center remains hopeful and even has a spot picked out for a larger facility some day.

"With all the help from those who support Milarepa Center, I have confidence that, with Lama Zopa Rinpoche's guidance, all the projects Rinpoche has requested for Milarepa Center to do, will be completed," she said.

One of the programs those at the center are very excited about is the Kid's Camp, a week of fun activities for area youth involving games, candy, activities, crafts and more.

Tsunma-la, better known as Sue, has been visiting from a Milarepa Center in Boston, Mass. during the month of July, to help out during the Kid's Camp week.

"Buddhism is very kid-friendly because it accepts your nature," said Sue. "[It teaches us to] extend our practice of kindness to all beings."

Sue admitted, though, that although there is an aspect of self-centeredness to the religion because the ultimate goal is to achieve happinesss for yourself, to become your own Buddha, you do it by making others happy.

Different styles of Buddhist teachings emphasize different points, she continued. They all stem from buddha shakyamuni and the same basic principals, but different groups package them differently. She illustrated her point by saying different people take different medications to cure a headache. Likewise, different people will connect more intimately with different types of teachers and teachings.

"It's whatever suits your temperament," she said.

For more information about Milarepa Center, how to donate or get involved, visit www.milarepacenter.org, or give them a call 802-633-4136.