Ithaca, New York (USA) -- The history of Tibet can be traced back more than 2,000 years through a long line of imperial rulers. The first Buddhist monastery was established in Tibet during the late 8th century. In the late 1300s, the first Buddhist monk received the title Dalai Lama after impressing a Mongolian visitor with his vast knowledge of Buddhism. The title, loosely translated, means “Ocean of Wisdom.” 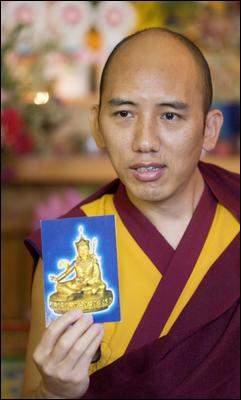 << SIMON WHEELER / Journal Staff
The Venerable Tenzin Gephel holds the Vajra symbolizing five wisdoms in his right hand and it is paired with a bell symbolizing wisdom coming from emptiness in his left. Together symbolizing enlightenment during the Guru Puja ceremony where offerings are made on the commemoration of the anniversary of the Buddha's birth.

It wasn't until 1642, under the fifth Dalai Lama, that the position gained political powers in addition to its religious importance.

Throughout Tibet's history there has been a frequent struggle for power between Tibetan rulers and their Chinese neighbors to the north, with both sides enjoying times of dominance.

Tibet cut its political ties to China when the Qing dynasty fell in 1911. It is generally accepted that from 1911 to 1950 Tibet functioned as an independent state. The political realities of the time are not as clearcut, however, in large part because China denied any official recognition of Tibetan sovereignty.

By the middle of the 20th century, the newly formed Peoples Republic of China was looking to extend its powers. In 1949 the Peoples Liberation Army marched into northern Tibet in an attack Tibetan sympathizers call unprovoked.

Tibet was somewhat vulnerable at the time because it had been 16 years since the 13th Dalai Lama died in 1933. Though the next Dalai Lama had been identified, he was considered too young, at 15, to take command of the country at the time of the Chinese offensive.

Despite his young age, the Dalai Lama accepted the full authority of his position by 1950 in hopes of quelling the fighting. In May of 1951, under duress, the Tibetan government conceded to the Chinese and signed a treaty that gave the Dalai Lama domestic power but left foreign and military affairs in the hands of the Chinese.

In keeping with Communist philosophy, the Chinese required Tibet become a religion-free state. To enforce that position, monasteries were destroyed and the expression of religion suppressed.

Slowly, with ever increasing momentum, opposition to Chinese rule grew. The resistance culminated in 1959 with the March 10 Tibetan National Uprising.

The Chinese met protesters with harsh retaliation. It is estimated more than 80,000 Tibetans died in the clash.

The Dalai Lama escaped the violence and possible arrest by the Chinese on March 17 by disguising himself as a regular soldier and taking a dzo, which is a hybrid yak, over the mountainous border. After the arduous two-week trek, he arrived with dysentery in India, where he was offered political asylum.

The culture in exile

The Dalai Lama's departure from Lhasa was followed by a mass exodus of Tibetans to India, Nepal and Bhutan. It is estimated that more than 80,000 Tibetan refugees followed him into exile. Those who stayed found themselves strictly ruled. The Tibetan government in exile estimates that 1.2 million Tibetans, one-fifth of the population, have been killed as a result of Chinese policies, and approximately 6,000 buildings have been destroyed.

Eventually, the Dalai Lama set up a government in exile focused on supporting the Tibetan refugees and maintaining their education and culture. In 1987, he laid out his Five Point Peace Plan for regaining Tibetan control of the country. If enacted, the plan would establish Tibet as a zone of peace (making it neutral in international conflicts), end the large move of ethnic Chinese into Tibet, restore human rights and democratic freedoms, stop China's use of Tibet for nuclear production and waste storage and establish negotiations about the future of Tibet.

While the Chinese did not accept the plan, it is an example of the Dalai Lama's dedication to nonviolent struggle. The Five Point Peace Plan, in addition to more than 30 years of commitment to peaceful diplomacy in the face of oppression, earned him the Nobel Peace Prize in 1989.

It was around this time, in the late 1980s, that the plight of Tibetans began to attract greater attention in the U.S. and around the globe. In 1988 the International Campaign for Tibet was founded, and Free Tibet was established the year before in England. In 1996 the first Tibetan Freedom Concert was held in San Francisco.

For years, actor Richard Gere has been the most public face of U.S. support for Tibet. He helped found the Tibet House in 1987 and since 1995 has served as chairman of the International Campaign for Tibet. In 1999 and 2003 he sponsored the Dalai Lama's visits to New York City.

This year at the Ithaca celebration of the Dalai Lama's 72nd birthday, 81-year-old Tibetan native Lhakdol and her husband Lhakpa were on hand for the festivities. As with many Tibetans their age, they do not have a surname. Through her daughter-in-law, Tenzin Tsokyi, who translated, Lhakdol said that she was happy to make her first trip to the U.S. and visit with her son and daughter-in-law, but she remembered well the hardships that followed the entrance of the Chinese in Tibet.

Lhakdol left Tibet in 1965 at the age of 37 with her husband and six children. Forced to leave for fear of religious persecution, they left with little more than the clothes on their backs and headed to Nepal. Having to provide for their family with few resources and in a new community was very difficult, and for years Lhakdol did manual labor, building roads and digging ditches.

“They were paid very little and worked very hard,” her daughter-in-law said.

Like Lhakdol's grandchildren, many in the newest generation of Tibetans have never set foot in Tibet. Even many of the community's adults were born in India or Nepal, where their parents had fled.

Dreams of a Free Tibet

Palden Oshoe, the monastery's translator, calls himself one of the middle generation. He was born in Bhutan, the son of one of many artists called on by the Dalai Lama to create religious paintings and sculptures. He joined a monastery in India when he was young and stayed for about 10 years before leaving the monastic life. In 1994 he took the job as official translator for the monastery in Ithaca. Eight years ago his daughter was born here. He worries for his daughter and about how she will juggle living between two cultures.