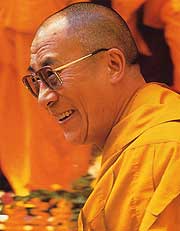 "It is impossible to achieve inner peace when you are full of hate, suspicion and fear," the Buddhist spiritual leader told 5,500 people who packed Barton Hall for the first of his three public appearances during a two-day visit to Ithaca.

"Taking care of others is the best guarantee for your own happy future," said the 72-year-old exiled Tibetan leader and Nobel laureate.

The visit to the Ivy League school in upstate New York was organized by Namgyal Monastery Institute of Buddhist Studies. The Dalai Lama came to Ithaca to visit and bless the site of the new Namgyal temple, which is the home of the Namgyal branch in North America.

As part of his visit, the Dalai Lama had a sold-out appearance scheduled Wednesday at Ithaca College, where he was to lecture on "Eight Verses for Training the Mind."

Also Wednesday, he was scheduled to lead an interfaith session, "Prayers for World Peace," at the State Theater in downtown Ithaca.

The Dalai Lama told listeners that his talk would be informal _ "sometimes formality itself creates bad air," he said. At times, he emitted a deep, booming laugh as he reacted to his own quips; other times his voice rose to a high pitch as he sought to emphasize his words.

People lined up two hours before the speech to get inside Barton Hall. Another 2,000 students and faculty packed into Bailey and Kennedy halls to watch a telecast of the speech. Countless more in the community watched on cable television and the Internet.

The Dalai Lama told his audience _ a mix of young and old _ that the responsibility for achieving global peace lied not with the leaders of countries but with the people instead.

"Genuine peace must come through inner peace ..." he said.

"Many unnecessary problems we are facing today are because of my generation's mistakes and negligence."

"You are the people who have the opportunity to make a new ship of this planet," he said, singling out the college students in the crowd.

Nature has already equipped each individual with the potential to achieve inner peace, the Dalai Lama said, describing the human body as the ideal vessel for compassion because humans have "arms for hugging and teeth for smiling."

In another light moment, the Dalai Lama said he learned compassion through his mother's affections.

"Unless you are born from the lotus ... all humans have the same potential for compassion and love," he said.

Through reasoning and training, each person can "grow infinite, unbiased compassion," he said.

The Dalai Lama has led Tibet's government in exile in India since 1959. He has spent the last half-century as an international political leader, advocating for freedom of the people of Tibet, opposing violence and calling for respect of human rights worldwide. He won the Nobel Peace Prize in 1989.