ITHACA, NY (USA) -- Of the messages the Dalai Lama provided at each of his three public appearances over two days in Ithaca, his speech to about 2,000 people Wednesday afternoon in the Ben Light Auditorium at Ithaca College may have been the most philosophically complex. 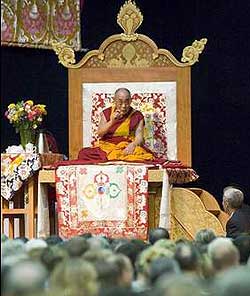 The lecture on Eight Verses on Training the Mind featured insights into basic Buddhist principles and how they can lead a soul to better understanding and control over its own mind and emotions.

Ithaca College President Peggy Williams introduced the Dalai Lama by echoing his own words: that he considers himself a simple monk.
The Dalai Lama's lecture concluded with the insistence that every person think of themselves below others in a humble way.

“I see myself as inferior to all,” he said.

“I felt like it was a very down-to-earth experience,” he said. “I originally went there just to be in his presence, but I definitely took a lot more away from this talk than I thought I would.”

Henschen said his previous exposure to Buddhism was helpful at the talk.

“I definitely see how it could have been over some peoples' heads,” he said.

Henschen, who missed out on the initial sale of tickets, was able to go with a friend who had an extra seat. He said he appreciated the translator's role in helping to explain some of the Dalai Lama's thoughts.

“Getting to hear the Dalai Lama speak in Tibetan was a cool part,” he said.

On her way out of the talk, Margaret Meyers said she left the speech feeling like she has some personal work to do to train her mind to be kinder and gentler.

The Dalai Lama began his speech on the coattails of his Wednesday morning presentation at the State Theatre, where he discussed the importance of knowing and understanding other faiths as a way of promoting harmony and gaining a deeper respect for others.

The idea of knowing other religions transformed into moderately dense philosophical discourse that examined the true existence of self and the answer to the question “Who am I?”

One of the aspects of Buddhism the Dalai Lama touched on was the freedom within the religion to critically analyze the writings of the Buddha. The Dalai Lama said the Buddha never expected to be followed blindly but rather invited analysis that could reject his word. That practice leads to personal understanding.

The audience watched and listened intensely, many leaning forward with interest, others listening with eyes closed. During long, more complex readings, much of the audience awaited the Dalai Lama's long-time translator, Thupten Jinpa, to translate the passages.

For those familiar with Buddhism such as Astrid Jirka, the lecture may have been easier to digest than for novices. When asked what she would take away from the speech, she said, “I am really grateful that he's come to speak to us.”