At a Buddhist Retreat in W.Va., Finding Her (Inner) Voice 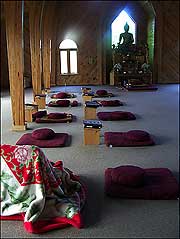 << A meditation hall at Bhavana Society, a Buddhist retreat tucked away in the whispering woods near High View, W.Va.
(Andrea Sachs )

It was a late afternoon meditation at the Bhavana Society, a Buddhist retreat tucked away in the whispering woods near High View, W.Va., where I had gone to escape the feverish holiday buildup. I was sitting cross-legged on a plump pillow in the Meditation Hall, boxed in by monks and nuns as still as statues on a mantelpiece. Perhaps on the outside I looked tranquil, but inside, the chatter started immediately.

Voice 1: Oh, no, my left leg is asleep. I need to stretch it. But if I do, I might kick the nun. I will definitely come back as a shoe if that happens. Hmmm, shoes. Wonder if my sister would want shoes for the holidays.

Voice 2: Stop thinking about your numb leg and concentrate.

However, as I learned during a recent visit, frenetic thoughts and dozing appendages are part of the process toward enlightenment. Resident monks and more-experienced laypeople repeatedly assured me that it is normal for your inner thoughts to ping-pong around your head before they settle down and your mind empties out. At that point, Nirvana should be within your reach. Knowing my mental limits, I did not set such lofty goals; I would be content with a silent night and some much-needed heavenly sleep.

The monastery and retreat center was established more than 20 years ago by Bhante Henepola Gunaratana, an 80-year-old Sri Lankan with an unlined face and ancient eyes. The monk became familiar with this patch of Snow White forest while studying and working as a chaplain at American University. Bhante G's mission was to create a place for monks and nuns to practice Theravada, a South Asian strain of Buddhism; to provide training for those wishing to be ordained; and to offer sanctuary to civilians desperate to escape looping Christmas carols and holly jollies.

The residents survive on the kindness of others, financially and nutritionally. Yet there's no need to bring your own cot and cooler of food. Wooden buildings painted barnyard red dot the 44-acre property, including same-sex dorms and kutis, or single-person huts without electricity or plumbing. Two daily vegetarian meals are served in the Sangha Hall, a spare dining area in the main building. The holy ones sit on an elevated platform, beneath the benevolent gaze of a gold Buddha, and scoop their vittles out of metal alms bowls. We layfolk dine on the floor, using a narrow bench as a table and a cushion for a chair.

To hush the outside world, the center bans all modern distractions: no music, phones, computers, TVs, not even magazines and books. Visitors can read any of the Buddhist-related publications that fill the shelves in its library. Daily chores are also assigned; I was angling for "feed the cat" but ended up sweeping and mopping the kitchen floor and washing the breakfast dishes.

Silence is also emphasized and sometimes mandatory. Talking, obviously, is not allowed during the daily meditation sessions at 5 a.m. and 5:30 p.m., nor is it permitted during the 7 a.m. breakfast or 11 a.m. lunch. (No food is served after noon; you can, however, drink the provided beverages until bedtime.) Guests also are asked to zip their lips between 9:30 p.m. and the post-breakfast hour. Nights are silent, and mornings are very holy.

"We are always talking, talking, talking," Bhante G told me, as I joined him on the last stretch of his five-mile walk, his robes barely skimming his running sneakers. "People need to observe silence to find calm and peace."

Keeping quiet also encourages mindfulness, a key component of the religion. Indeed, I became hyper-aware of my actions and surroundings -- the chewiness of the raisins in my oatmeal, the crunch of leaves underfoot, the soft swish of the monks' rust-colored robes.

To be honest, though, it was hard to quiet the voices. But during my last meditation, I could proudly say that they were now talking in whispers. Maybe by nightfall, they'd be silent.

The Bhavana Society (304-856- 3241, http://www.bhavanasociety.org) is about a two-hour drive from Washington, off Back Creek Road in High View, W.Va. The center accepts guests throughout the year for personal or organized retreats. (During planned events, only retreatants, not individual guests, are allowed to visit.) The stay includes lodging, two daily vegetarian meals and meditations, use of the library and such activities as a Q&A with the monks. There is no charge, but donations are accepted. (I paid $60 for two nights.)