Ithaca, NY (USA) -- At first glance it looks like every other house on Aurora Street with icicles hanging from the eaves and a red brick chimney. But what lies inside is anything but ordinary — the Dalai Lama’s North American headquarters, his only central hub outside of Asia — The Namgyal Monastery. 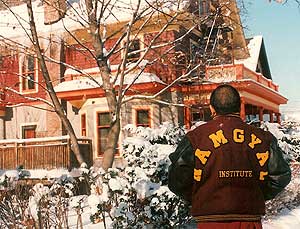 “We are the North American seat of His Holiness,” said Ted Arnold, former president of the Board of Directors of the monastery.

So why Ithaca? According to Arnold, there was a lottery of Tibetan refugees to gain citizenship to come to Ithaca in the early ’90s, and Ithaca set up a few dozen of them, creating a Tibetan community. Shortly after the lottery, a local publication company — Snow Lion Publications, who had a relationship with the Dalai Lama — brought His Holiness here for his ’91 visit.

Not only the Dalai Lama was drawn to Ithaca, however. The Namgyal Monastery attracts people from all over North America.

“Seven years ago I moved here to attend this monastery,” Arnold said. “There are four dozen local people who are heavily involved, in both classes and events, and another two dozen within 100 miles who come fairly often.”

Arnold was President of the Monastery’s board for three years, and resigned this year to keep up with growing responsibilities at the Cornell Store. He is still heavily involved with the monastery, particularly the capital campaign they are running to finish construction on a new facility, which according to the website is called “Dü Khor Choe Ling, or The Land of Kalachakra Study and Practice”.

According to Arnold, the Dalai Lama is planning to visit the new facility, and will be back in Ithaca as soon as it is completed.

“The ground breaking was in July of last year, and by the time His Holiness came to bless the land, the central building was completed,” Arnold said. “It is a $3 million project, and we are at least a million off.”

However, according to Arnold, the fundraising is not a quick process for the monastery.

“A lot of people made small contributions, there was not one big sponsor,” Arnold said.

According to the Namgyal website, the new monastery is needed “to accommodate [their] growing student base and the need for retreat facilities, student housing, and adequate dining facilities.”

The monastery provides a range of services from meditation sessions, to classes.

“There is a full curriculum of classes, from Buddhist philosophy to Tibetan language,” Arnold said.

The monastery also provides a location for the Tibetan community in Ithaca to gather, meditate, and celebrate together.

“As a Tibetan community we celebrate our various holidays, such as the Tibetan new year,” said Tenzin Tsokyi, former president of the Tibetan Association of Ithaca as well as a previous board member of the monastery. “Namgyal often hosts these events.”

Namgyal’s capacity was not large enough to host the thousands of people who came to listen to the Dalai Lama speak, but it accommodates the small Tibetan community well.

“There are about 40 to 50 people, including venerables [a formal term for a monk] and children,” Tsokyi said. “There are only about 14 households, including single person households.”

According to Tsokyi, the vast majority of the Tibetans are Buddhist, so the community can use the monastery as a cornerstone.

“All Tibetans that I know are Buddhist. Even with those who have married Americans or other races, the spouse is usually Buddhist, and they share that common ground,

Tsokyi said. “But maybe there are one or two.”

The association also meets monthly as a community in the informal environment of their homes.

“We are very close and meet once a month, on the second Saturday. We take turns holding the meetings in one of our houses – they usually start with one of the monks holding a prayer, and then we have a sort of party with delicious food, and talking,” Tsokyi said. “The goal is to get people together to teach the children our culture in an informal environment. The monastery is formal, and the kids have to sit and be quiet, but in our homes, the kids and run around and have fun.”

Regardless of the monastery’s formality, it provides a neutral meeting place for all sects of Tibetan Buddhism.

“There are four sects of Tibetan Buddhism, but the Dalai Lama is the head of all the schools. The Namgyal Monastery is non sectarian, which opens it up to the whole community,” Arnold said. “For those who are interested, we have an open door policy. Anyone who is interested, or wants to ask questions can go online or speak to any of the monks, or administrators.”

This open door policy seems to have succeeded in making the unique monastery dear to the Tibetan community.

“We feel fortunate to have this [place],” Tsokyi said. “This is a very special monastery.”